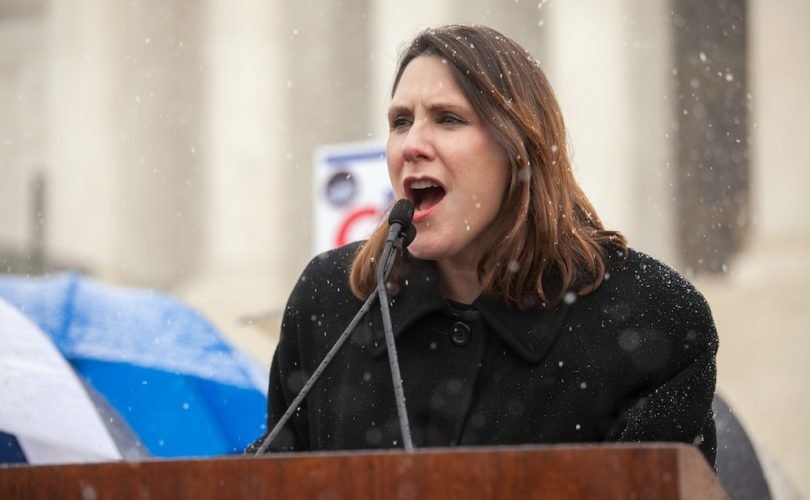 Charmaine Yoest, president of Americans United for Life, speaks at a rally in front of the U.S. Supreme Court during oral arguments for Sebelius v. Hobby Lobby.American Life League

Pro-life and pro-First Amendment organizations hailed the ruling as a welcome win in the culture wars.

“This is as close as a Southern Baptist gets to dancing in the streets with joy.”

“I am proud that our Supreme Court has upheld the fundamental religious liberties of American citizens to engage in the free exercise of their religious beliefs, not only in their houses of worship, but also in their day to day lives, in business as well as at home,” said Thomas Brejcha, president and chief counsel of the Thomas More Society.  “Our justices have affirmed that Americans must not be compelled to put aside their religious beliefs and values as a pre-condition to their entering into the sphere of commerce and making a living for themselves and their families.”

“The Greens refused to render to Caesar that which did not belong to him and the Supreme Court agreed,” said Dr. Russell Moore, president of the Southern Baptist Convention's Ethics and Religious Liberty Commission. “As a Baptist, I am encouraged that our ancestors' struggle for the First Amendment has been vindicated. This is as close as a Southern Baptist gets to dancing in the streets with joy.”

While she hailed the decision as a victory for all people of faith, former vice presidential candidate Sarah Palin asked on her Facebook page, “Who could imagine that five judges are the only thing standing between us and a violation of our First Amendment freedom of religion by an out of control administration at war with people of faith?”

Many said the government's claims that “women” demanded employer-funded birth control were out-of-touch and insulting. “We are especially thankful that the Court saw right through the Obama administration's false claim to be working on behalf of all women with this unconstitutional mandate,” said Penny Nance, president and CEO of Concerned Women for America. “The mandate served only that group of women who support the president's radical pro-abortion agenda.”

Susan B. Anthony List President Marjorie Dannenfelser thanked the Hahn and Green families for enduring “the abuse of the radical abortion lobby and others, who say they respect diversity but in fact, endorse and impose conformity. Their message that women want free abortifacient drugs – and that they value these drugs above religious liberty – is demeaning to all American women and will be rejected by voters nationwide this fall.”

Americans United for Life President and CEO Dr. Charmaine Yoest, upon hearing news that the Court ruled in favor of the Green and Hahn families, said the two cases “underscore the critical need for laws protecting Americans’ freedom of conscience. The anti-life mandate the Obama administration tried to impose on these families is evidence of Big Abortion’s manipulative agenda, as they move from choice to coercion.”

Rep. Diane Black, R-TN, is the author of just such a law: H.R. 940, the Health Care Conscience Rights Act. She said the government “should never require forcing people to choose between coverage and their conscience, and I will continue to work on behalf of Americans across the country to ensure that their 1st Amendment rights are not being infringed on by this unconstitutional HHS mandate.”

“At its core, today’s decision was about the right of individual and family business owners to be free from government mandates that force them to deny their sincerely-held religious beliefs,” Congresswoman Michele Bachmann said. “America was founded on the principle of religious freedom, and there is nothing more fundamental than the First Amendment.”

“Genuine religious conviction does not begin and end at the church, temple, or parish door,” said Congresswoman Virginia Foxx. “Today, the Supreme Court stood up for religious liberty and stopped President Obama’s assault on employers who believe they can follow their conscience while conducting business in this country.”

In Chicago, the Stand Up for Religious Freedom rallies – called to oppose the HHS mandate – heard an analysis of the ruling from Eric Scheidler, a national coordinator for the Coalition to Stop the HHS Mandate and executive director of the Pro-Life Action League, along with Peter Breen, vice president and senior counsel of the Thomas More Society, and Emily Zender, executive director of Illinois Right to Life.

“This is more than a victory for people of faith. This is a victory for the people of a free America,” Lutherans for Life said in a press release. “Please join us in thanking the Lord of the nations for this ruling.”

Congressman Chris Smith, R-NJ, a pro-life stalwart, said the Supreme Court's next move must be to consider the “more than 50 cases involving nonprofit organizations, including the University of Notre Dame and the Little Sisters of the Poor, which have sought similar relief in the courts in order to follow their religious beliefs as they provide health care for their employees.”

Can't believe we live in a world where we'd even consider letting big corps deny women access to basic care based on vague moral objections.

Planned Parenthood also launched an online petition branding the ruling “an insult to the generations of women who have fought for control over their own bodies and their own futures. … I will continue to fight for the right of every woman to make her own private medical decisions without interference from anyone – not her boss, not politicians, not the Supreme Court.”

Some legal analysts say social liberals are right to be concerned, because they believe today's ruling hints the Supreme Court will overturn the HHS mandate in its entirety. “This sets a precedent for the many other cases similarly concerned with winning relief from this unjust mandate,” said Dr. Grazie Pozo Christie, a member of The Catholic Association's advisory board.

Lori Windham, senior counsel for The Becket Fund for Religious Liberty and counsel for Hobby Lobby, said today's decision bodes well for non-profit organizations whose cases have not yet reached the High Court. “The handwriting is on the wall,” she said. “The Court has strongly signaled that the mandate is in trouble in the non-profit cases, too.”