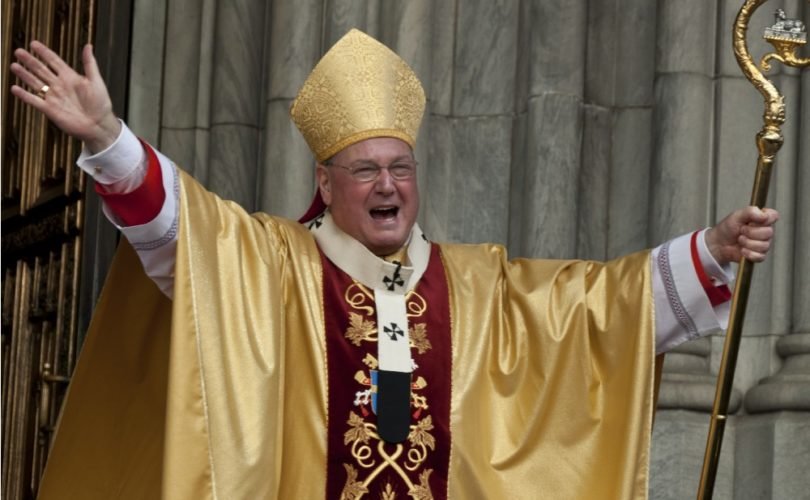 Cardinal Timothy Dolan's decision to act as grand marshal of the New York City St. Patrick's Day parade despite its decision to allow an openly homosexual organization to participate has drawn strong criticism from Catholic writers and outrage from many laity.

The parade announced that an LGBT organization of NBC employees, which calls itself [email protected], will openly march behind a banner, marking the first time homosexuals have marched as a separate organization in the religious event intended to celebrate a beloved saint.

Cardinal Dolan said the organizers had his “confidence and support” in making the change, which his predecessors had resisted for more than two decades.

The cardinal's actions elicited feelings of hurt, betrayal, and abandonment by their pastoral shepherd.

Michael Hichborn of the American Life League called the about-face “a dereliction of duty.” National Catholic Register journalist Pat Archbold agreed that it represented “nothing less than an endorsement of the normative nature of the gay identity.” Matt Abbott at CNSNews.com called Cardinal Dolan's decision “very disappointing and perplexing.”

“Cardinal Dolan truly is naïve if he imagines his participation in the St. Patrick’s Day Parade will not be seen by – dare we say? –most Catholics as yet another endorsement of the 'gay' agenda,” George J. Marlin and Brad Miner of the Church in Need USA wrote at The Catholic Thing.

The occasion of a leading prelate of the Roman Catholic Church seeming to approve of non-celibate homosexuality will cause grave scandal, particularly as it is magnified by broadcast outlets. “Next year there will be only one story-line of interest to the reporters who cover the annual parade in the world’s media capital: the triumph of the gay activists,” Phil Lawler wrote at CatholicCulture.org. “Photographers will be competing for the one 'money' shot: the picture of the contingent from [email protected] marching past the reviewing stand at St. Patrick’s Cathedral, under the benign smile of Cardinal Timothy Dolan.”

Marlin and Miner also referenced the corporate pressure brought to bear on the parade's organizers from Guinness and Heineken beer companies, which withdrew their sponsorship last year, as well as a threatened boycott from Ford Motor Company. “Guinness Brewery will surely end the parade boycott it recently declared,” they wrote. “But many Catholics faithful to Church teaching will wonder why Cardinal Dolan won’t be shutting the doors at St. Patrick’s [Cathedral].”

Donald McClarey at The American Catholic said the reaction proves that “Timothy Cardinal Dolan continues to be the perfect Company Man.”

“Excuse me for being blunt, but by all appearances, the cardinal has (yet again?) capitulated to the 'almighty' lavender lobby,” Matt Archbold wrote. “If the cardinal had some guts, he could – and should – have told the organizers, 'Don’t change the rules simply to pacify homosexual activists. And if you do change the rules, I’ll publicly withdraw my support for the parade.'”

“Alas, Cardinal Dolan didn’t do that, and now we have more scandal,” he added.

Citing a long string of actions by Cardinal Dolan that he said failed to fight the homosexual agenda or appeared to give some approval to the practice, Michael Voris said on a breaking news segment of Church Militant TV, “It is precisely this kind of continuing acceptance of moral evils, step by incremental step, that has so many Catholics deeply concerned and growing even more disheartened with the leadership of their bishops.”

Some wondered if the time had not come to withdraw Catholic endorsement, or simply end the parade, which began in 1762 and was attended by an estimated one million people last year.

“It’s time to cancel the St. Patrick’s Day Parade and the Al Smith Dinner and all the other ‘Catholic’ traditions that have been hijacked by the world,” Monsignor Charles Pope wrote in a blog posted on the Archdiocese of Washington's website on Thursday. “Better for Catholics to enter their churches and get down on their knees on St. Patrick’s Day to pray in reparation for the foolishness, and to pray for this confused world to return to its senses.” The archdiocese took the entry down within hours without comment. (LifeSiteNews has archived a copy of the post here.)

Not all viewed the decision in a negative light.

“I think we’re seeing the Catholicism of Pope Francis come to the Archdiocese of New York,” J. Patrick Hornbeck, chairman of the theology department at Fordham University, told the Associated Press. “Cardinal Dolan’s statement is welcoming. He did not make this decision but sees the parade as an opportunity for unity.”

Pope Francis' off-the-cuff quip about homosexuality – “Who am I to judge?” – has been widely cited, and out of context, as the pontiff's endorsement of or indifference toward the lifestyle.

But traditionalist writers say Cardinal Dolan's move has done little more than dispirit Catholics and embolden the homosexual lobby. Rod Dreher at The American Conservative wondered “how long it’s going to take before the Cardinal Archbishop of Wales New York realizes that he will have earned no new friends — the people he’s trying to charm are still going to hate him and make fun of him — and alienated the old ones who would have normally been his most loyal ones?”