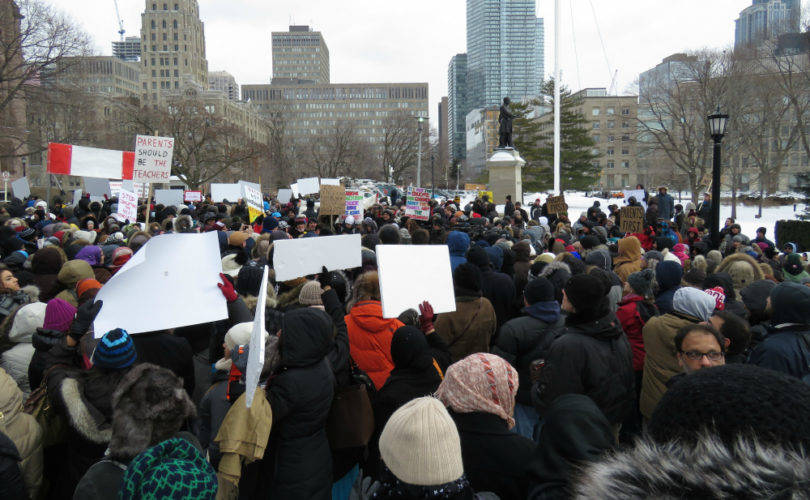 February 24, 2015 (LifeSiteNews.com) — While the Ontario Liberal government under lesbian Premier Kathleen Wynne would have parents believe its newly unveiled sex-ed program is an unbiased presentation of fact, a detailed look at what kids in grades 1-8 are expected to learn reveals something entirely different.

Passing the baton of the 1960s sexual revolt to today’s up-and-coming generations of youngsters, the 2015 Health and Physical Education program states in its earliest pages that sexual health “is more than simply teaching young people about the anatomy and physiology of reproduction,” but includes the relatively recent inventions of “sexual orientation, gender identity and gender expression” as well as “gender roles and expectations.”

From the earliest ages, children are taught that they have the “right to enjoy their sexuality” as long as they don’t hurt others and avoid getting an STD or becoming pregnant.

Here are the highlights from the curriculum, broken down by grade.

Children learn to “identify the characteristics of healthy relationships” including “accepting differences, being inclusive.” They will learn to “respect” how “invisible difference” such as “gender identity, sexual orientation…make each person unique.”

“We all come from different families. Some students live with two parents. Some live with one parent. Some have two mothers or two fathers,” the curriculum states as a student response to “illustrate the intended learning.”

Regarding a teacher prompt on “exposure to people who ask you for sexual pictures,” the student response states nothing about not taking or sending such pictures. It instead states: “I should make sure that an adult knows what I am doing when I’m using the computer, the Internet, or a cell phone.”

Children learn that “social bullying” includes making “homophobic comments.” The curriculum defines “homophobia” as a “disparaging or hostile attitude or a negative bias, which may be overt or unspoken and which may exist at an individual and/or a systemic level, towards people who are lesbian, gay, bisexual, or transgender (LGBT).”

Boys and girls together learn in detail to identify the parts of the male and female reproductive system, including “vagina, cervix, uterus, fallopian tubes, ovaries, endometrium, and clitoris” as well as “penis (with or without the foreskin), scrotum, urethra, testicles, prostate gland, seminal vesicles, and vas deferens.”

They learn about the process of reproduction, including menstruation and ejaculation. “Fertilization can occur when the penis is in the vagina,” a teacher prompt states.

Children are taught “strategies” if they find themselves in a situation were they are “harassed” because of “gender identity…sexual orientation…gender expression.”

They learn that their “gender identity [and] sexual orientation” is something they are born with. “All of these things are a part of who I am. I cannot control these things,” a student response states.

Children learn to “assess the effects of stereotypes, including homophobia and assumptions regarding gender roles and expectations, sexual orientation, gender expression.” They learn “appropriate ways of responding to and changing assumptions and stereotypes.”

Children are taught to dismantle “what is ‘normal’ or expected for males and females” since such “assumptions…are usually untrue, and they can be harmful.”

“They can make people who do not fit into the expected norms feel confused or bad about themselves, damaging their self-concept, and they can cause people to discriminate against and exclude those who are seen as ‘different,’” the curriculum states.

Success in changing negative “stereotypes” regarding “people’s sexual orientations,” is achieved by “reading books that describe various types of families and relationships.”

“Not everyone has a mother and a father – someone might have two mothers or two fathers…We need to make sure that we don’t assume that all couples are of the opposite sex, and show this by the words we use. For example, we could use a word like ‘partner’ instead of ‘husband’ or ‘wife,’” a student response states.

It is in this grade that children learn how to give legal “consent” to sexual activity.

“A clear ‘yes’ is a signal of consent,” a student response states.

In a Grade 7 and 8 overview, the curriculum states “key” topics that have been learned include, among others, “understanding how gender identity and sexual orientation affect overall identity and self-concept, and making decisions about sexual health and intimacy.”

Revisiting the topic of sexting — defined as the “practice of sending explicit sexual messages or photos electronically” — the curriculum teaches children that the practice has “significant risks” and what they can do to “minimize those risks.” Suggestions include that there are “legal penalties for anyone sharing images without consent.”

The children are taught that if they are thinking of having sex, they should “keep a condom with them so they will have it when they need it.”

“It is very important that you use a condom if you do have sex,” a student reply states.

They are taught that instead of practicing abstinence, “one of the best things you can do to stop HIV is to stop the stigma that is associated with having the infection.”

The children are also taught that sexual health means, among other things, “your understanding of your own body, including what gives you pleasure.”

“Gender identity refers to a person’s internal sense or feeling of being male or female, which may or may not be the same as the person’s biological sex. It is different from and does not determine a person’s sexual orientation,” a teacher prompt states.

“A person’s self-concept can be harmed if a person is questioning their gender identity or sexual orientation and does not have support in dealing with their feelings of uncertainty,” the curriculum states.

When asked about the kind of support people need to help them “understand and accept their gender identity and sexual orientation,” a student response states: “Having role models that you can relate to – for example, people of similar ages or cultures – is important. So is having all gender identities and sexual orientations portrayed positively in the media, in literature, and in materials we use at school.”

By now Grade 8 students will be able to “demonstrate an understanding of aspects of sexual health and safety, including contraception and condom use,” as well as the “benefits and risks of different types of contraception.”

They will be able to “analyse the attractions and benefits” of being in a relationship, including for the reason of “pleasure.”

The students are told that “intimate behaviours” in such relationships “can include holding hands, hugging, kissing, touching bodies and genitals, and engaging in sexual intercourse.”

They are told it “takes practice” to communicate to their partners about “sexual health choices, consent, and keeping safe.”

‘Language and communication are never neutral’

While the curriculum lists abstinence as a choice for students, even telling them it is better to “wait until you are older to have sex because you need to be emotionally ready,” it presents the practice ambiguously, stating that “abstinence can mean different things to different people.”

Not once in the entire curriculum is the word marriage or love mentioned in relation to sexual activity. The creation of a new life is never once portrayed positively, but only as something to avoid.

The authors state they want the sex-ed curriculum to equip students to be critical thinkers so they can “analyse media messages and determine possible motives and underlying messages.”

“They are able to determine what biases might be contained in texts, media, and resource material and why that might be, how the content of these materials might be determined and by whom, and whose perspectives might have been left out and why,” they state.

By applying this logic to the above mentioned sex-ed, the casual reader can discern what critics say is a sexual agenda that goes beyond teaching children the simple ‘birds and bees’ of human reproduction.

“Language and communication are never neutral: they are used to inform, entertain, persuade, and manipulate,” states the curriculum.