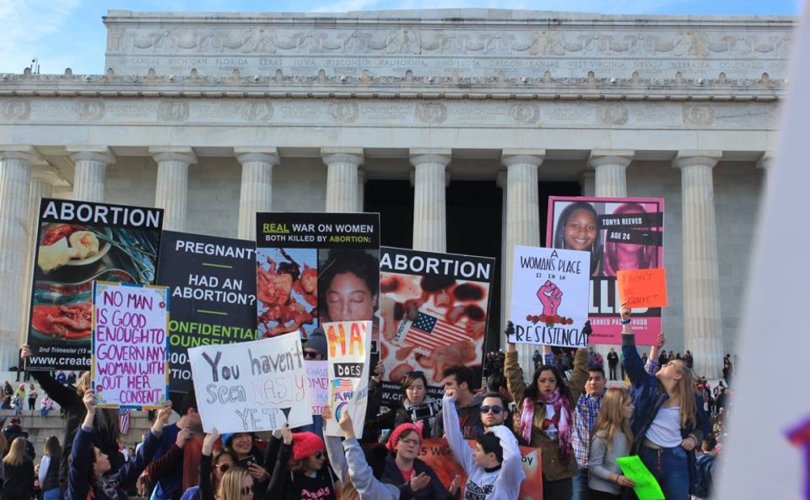 WASHINGTON, D.C., January 30, 2017 (LifeSiteNews) – After the March for Life, some brave young people stayed in Washington, D.C. to preach to the unconverted. They did so at considerable risk from an angry mob.

The second Annual Women’s March, organized to protest the democratic election of President Donald Trump in 2016, flooded the National Mall in Washington, D.C. on January 20 with a torrent of pink hats and feminist anger.

One hundred members of the college pro-life group Created Equal served as a counter-protest, standing on the steps of the Lincoln Memorial to witness to the carnage visited upon unborn children, over half of them baby girls. Created Equal’s representatives showed the marchers actual images of the aftermath of abortion: a dismembered dead baby.

The young pro-lifers withstood a barrage of verbal abuse and sexual harassment as furious abortion supporters vented their rage at this challenge.

Rachel Burkey, 21, of Fort Wayne, Indiana told LifeSiteNews that an older woman made a crass sexual overture to one of pro-life girls: “At one point a middle-aged woman walked up to one of our female volunteers, and while reaching towards her groin, aggressively and repeatedly said, ‘Can I grab your p***y?’”

Sam Riley, 22, of Yucaipa, California told LifeSiteNews that the men and women he saw at the Women’s March did not at all exhibit the masculinity and femininity his friends and family model.

“The feminists I saw … both male and female, rejected both of the virtues belonging to their respective sexes,” he said. “I saw women yelling shrilly at others, calling them nasty names and one even [attempted] to sexually assault my colleague. [I saw] women who had no respect for others but plenty of remorseless contempt for other women who didn't align with their views absolutely. Many had no compassion for the women and men they were intentionally trying to hurt with all manner of vulgar names and degrading remarks.”

Riley was even stalked by an older woman in a pink hat denoting her genitals who shouted insults and obscenities at him, intimating that he belonged to the Klu Klux Klan.

“She didn't seem to like my observation that the KKK was a left-leaning Democrat-voting mob,” said Riley.

Lauren Metz, 18, of Fishers, Indiana said that harassment and abuse Created Equal experienced proved that the Women’s March was really a protest against the unborn’s right to life.

“As we were screamed at, called names, spit on, sexually harassed, and censored by the covering of our signs, the fact that the march was for complete and total abortion freedom was indisputable,” she told LifeSiteNews. A “male feminist…called me a piece of s*** and worse. He got within an inch or so of my face, continuing his harassment, exclaiming that he did not want to talk to me, only to harass me.”

Metz was struck by the hypocrisy of their opponents: the men at the Women’s March were interested in protecting only women who agreed with their pro-abortion views, and the pro-abortion women, supposedly respectful of women’s ability to think, told her she was “just brainwashed by men.”

Adam Corral, 23, of Decatur, Indiana told LifeSiteNews that the Women’s March was as he expected: uninterested in dialogue.

“Passersby, apparently uninterested in dialogue, would walk by flash their signs, cuss us out, or want to go on a temporary rant about how misinformed we were without explaining what we were misinformed about,” he said.

The marchers were racist and sexist, too.

“I had an African-American student with my group, and people kept coming up to him asking things like ‘Are you lost?’” Corral recalled.  “The women in my group were … referred to by marchers as tokens, or ignored by them when they [the marchers] pointed out how we were all men.”

Seth Drayer, 34, who lives in Columbus, Ohio, remarked on the hypocrisy of pro-abortion marchers who covered up Created Equal’s signs of aborted babies.

“Their decision to shield women present from our signs showed their paternalistic posture,” he said. “They deemed women too weak to see the reality of abortion and make a decision for themselves, undercutting core feminist principles by which they claim to be guided.”

Gabriel Vance, 22, also of Columbus, recounted a telling conversation he had had with five middle-aged women who were screaming at a young man in his group:

“I walked up and asked, 'Why are you being so mean to him?’ One of them said, ‘You had your day yesterday, and today is our day! You need to leave!’ I asked her, ‘But isn’t this march supposed to stand for equality, inclusiveness, and acceptance?’ She screamed, “No! No! No! Get out!’ This summarized the ‘Women’s’ March.’”

There were a few rays of light in all this darkness. Adam Corral told LifeSiteNews that a few people were willing to dialogue.

Rachel Burkey reported that there was “one sweet moment” when one volunteer made a connection with a group of girls.

“There was one sweet moment in the day… when I looked over at our volunteer Morgan, who was in conversation with four young girls, [and] they all gave her a group hug and thanked her for sharing with them.”