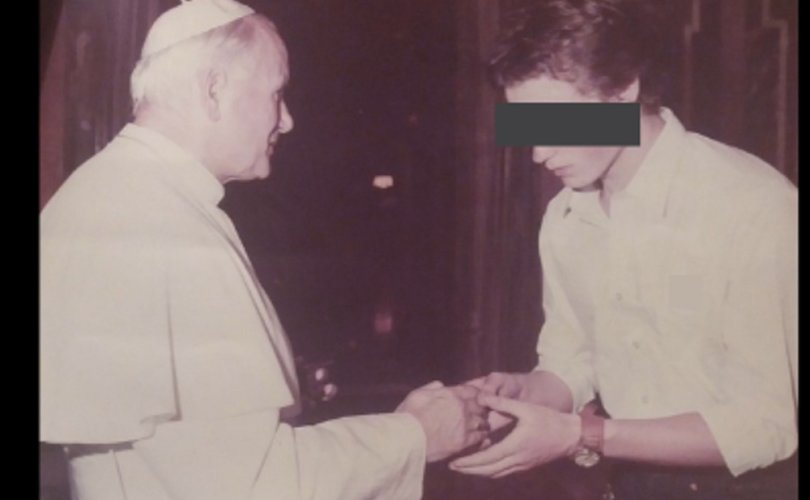 RS in his youth with Pope John Paul II

January 29, 2021 (LifeSiteNews) — The official cause of death for a Polish Catholic patient at the heart of a right-to-life dispute in England is not what you think: While the patient, known to the English-speaking world as “RS,” died almost two weeks after his clinically assisted nutrition and hydration (CANH) were removed for the last time, one of his sisters revealed that the official reasons for his death are pneumonia, oxygen deprivation, and a heart attack.

“We received peculiar information from the hospital about the reasons from our brother’s death,” tweeted RS’s sister, using the penname “Agata.” A court order forbids the publication of RS’s family’s names.

Agata then published in Polish what the hospital had told her and her family.

“We have received communications from the family of RS touching on matters related to his death. We write, therefore, to present our current view of the case,” the hospital allegedly wrote.

“The medical cause of death will be recorded as: 1a bronchopneumonia; 1b hypoxia (oxygen deprivation) of the brain; 1c myocardial infarction (heart attack),” it continued. “The death was investigated by the medical examiner, who has no concerns.”

RS’s sister also published the hospital’s response to the family’s request for an autopsy.

“The family requested a post-mortem. They did not give any reasons for this request. However, the (NHS) Trust and the medical examiner considered whether the post-mortem is required and gave their opinion that there were no grounds for carrying out an autopsy, because there are no concerns regarding the medical cause of death.”

Agata objected to no mention being made of the circumstances in which her brother’s life, which doctors said could last longer than five years, if he continued to receive CANH.

“He died from a heart attack that he had on November 6, and so his being starved for almost two weeks, without water and stuffed with midazolam (a sedative), didn’t cause his death,” she wrote sarcastically. “Unfortunately, my brother will be cremated tomorrow (January 29), and we won’t be able to prove anything.”

The University Hospitals Plymouth National Health Service Trust published a statement yesterday offering condolences to the family and asserting that the medical personnel involved in the case had “acted with compassion and professionalism throughout.”

“… (W)e would like to acknowledge that and thank them for their care,” the unnamed spokesperson added.

RS, a middle-aged family man, suffered a heart attack and sustained serious brain damage on November 6. By December, his hospital doctors wished to discontinue the comatose man’s basic care, as they believed that he had only a small chance of progressing to even a minimally conscious state, and might live five years or more in that state.

RS’s wife sided with the doctors, but his birth family, including his mother, two sisters, and niece, did not. RS’s wife stated that her husband would not want to be a burden on his family and that he would not want his children to see him in his disabled condition. RS’s birth family, however, argued that he was a church-going Catholic with strong pro-life views, opposed to abortion — including of disabled children — and euthanasia, and had objected to court decisions shortening the life of infant Alfie Evans. They believed, therefore, that he would not want to die from the removal of CANH.

On December 15, 2020, Justice Cohen of the Court of Protection decided both that the removal of CANH was in RS’s best interests and that his wife of 17 years must have known his wishes better than his birth family did. However, RS’s mother, sisters, and niece attempted to appeal the decision in the British courts and, with the support of the Polish government, to find respite in the European Court of Human Rights (ECHR).

Although they managed on three occasions to have RS’s CANH returned, they were ultimately unsuccessful in persuading either the British courts or the ECHR to overturn Justice Cohen’s ruling.

A Warsaw court ruled that it was lawful to take him from England and restore his life-supporting treatment. A Polish clinic specializing in disabilities of consciousness had offered to treat him. However, after a flurry of activity on the part of the Polish government, there was a long delay in negotiations that proved fatal to RS. He died Tuesday, January 26.

Agata thanked the birth family’s many supporters that day.

“Unfortunately, my brother died,” she tweeted in Polish. “I wish to thank everyone warmly for your help, support, and prayers. God took him to Himself, but we remain to make this world a better place. Your energy, kindness, and love will linger forever. I thank you with all my heart.”

For more information about the RS case, please click here.