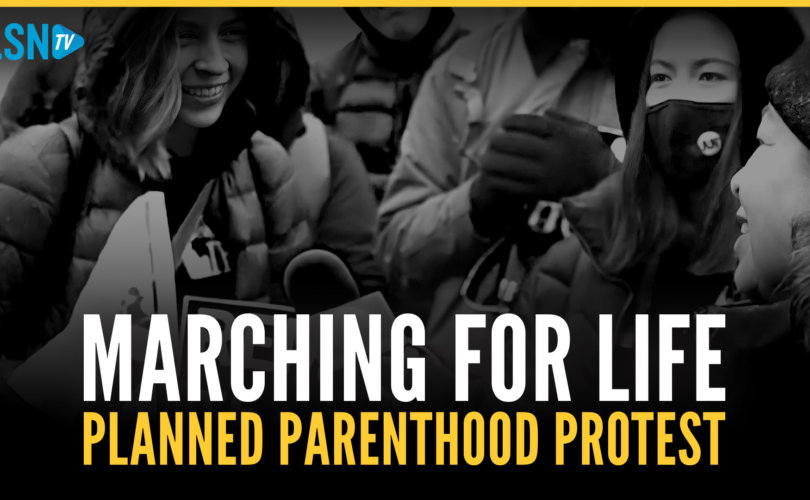 WASHINGTON (LifeSiteNews) — Dozens of pro-life advocates braved the cold and rainy weather to protest and pray in front of Planned Parenthood’s abortion facility in Washington, D.C., on Thursday, just one day ahead of the 2022 March for Life.

Coming from all across the United States, the diverse group of pro-lifers gathered to call for an end to legalized abortion, which has killed more than 62 million unborn children since the Supreme Court found a “constitutional right” to abortion in its landmark decision in Roe v. Wade in 1973.

Occurring on the 49th anniversary of Roe v. Wade, the protest at the Planned Parenthood and Friday’s March for Life may be among the most consequential for the pro-life movement.

Pro-life and pro-abortion advocates alike acknowledge that the deeply controversial decision in Roe v. Wade could be overturned this year, as the Supreme Court agreed to hear a case which could put decisions about abortion back in the hands of the states rather than the federal government.

Pro-lifers know, however, that the fight to protect the unborn won’t be over even if the Court overturns Roe.

“Overturning Roe’s going to do a lot of good,” said political scientist Michael New, an associate professor at the Catholic University of America and prominent pro-life activist. At the same time, New pointed out that “out opponents won’t give up,” noting by way of example that the Biden administration recently lifted a restriction on sending dangerous chemical abortion drugs through the mail.

Whether or not the Supreme Court overturns Roe v. Wade, pro-lifers committed to protecting the unborn are likely to continue to rally, pray, and protest as they did today outside Washington’s Planned Parenthood.

“This is a matter of life and death,” Bryan Kemper with Priests for Life told LifeSite. “And if you’re a Catholic, especially a Catholic priest, then this is the key, central issue that is going on right now that we need to worry about.”