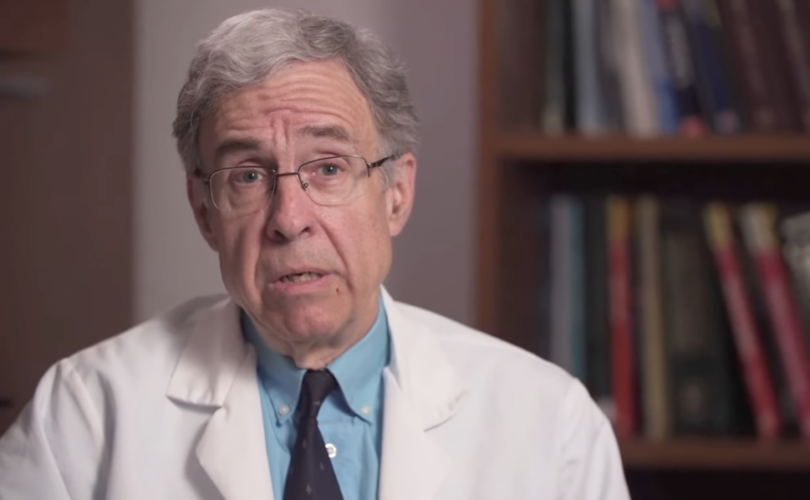 (LifeSiteNews) – A pro-life pediatric surgeon and medical school professor recently spoke out against the ongoing trend of addressing gender dysphoria with hormonal and surgical interventions, calling the practices “a medical atrocity” and malpractice.

Dr. Michael Egnor, a professor of neurosurgery and pediatrics at the Stony Brook University’s medical school in New York, spoke with The Federalist editor Emily Jashinky during a podcast interview on Friday about the issue of so-called “gender transitions” in modern medicine.

“Something I’ve come to realize with the growth of ‘gender affirming surgery’ and ‘gender affirming medical care’ is that we’re right in the middle of an extraordinary medical atrocity, and I really felt that I had to speak out,” Egnor said in the interview.

“I’m very pro-life, I very much oppose abortion, I think that’s a medical atrocity,” he added, going on to express similar views regarding the steps taken to “affirm” a person’s “gender identity.”

As a professor, the doctor explained that he discusses various medical experiments which occurred in the past and are now condemned, such as those conducted by Nazis.

“We point out that at the time, all of these atrocities were widely accepted in the medical community,” he said. “Eugenics was taught in practically all medical schools for many years.”

Egnor recalled that he tells medical students “We’re doing bad things that people will be talking about in 50 years and we don’t necessarily know what they are because we’re right in the middle of it.”

The doctor, who has also written an article for The Federalist on the same topic, stated that he would classify so-called “gender affirming care” as malpractice even though the technical definition of malpractice emphasizes medical practices which are not common. By this definition, he said, mutilation for the sake of a “gender identity” is easily not considered an ethical issue, due to how common it is today.

Egnor classified gender dysphoria as a “psychiatric illness” which should not be treated with hormonal or surgical intervention.

He compared gender-confused patients to those who, as a result of a psychiatric diagnosis, request amputations and other forms of damaging a healthy body. Doctors who agree to perform these surgeries would be imprisoned.

“We don’t do what mentally ill people want us to do just to satisfy their mental illness,” Egnor said. “The reality is that ‘trans men’ are women and ‘trans women’ are men, and we should help them try to deal with that.”

However, he added that the “proper treatment” for those suffering from gender dysphoria “is not mutilation or castration.”

Egnor described hormonal and surgical intervention as “very dangerous” and “very inappropriate.” Puberty blockers, he said, can cause a variety of negative side effects among children, including depression, suicidality, and unknown impacts to fertility later in life.

Those who engage in cross-sex hormone use also have “much higher” hormone levels than those who do not, even compared to the members of the sex which is being imitated. Egnor said that prescribing these drugs for a psychiatric condition is “completely out of [the] bounds of any kind of rational medical practice.”

He condemned “gender affirming” surgery similarly, although he noted that it is “even more radical.”

Most people ‘know full well that this is garbage’

Egnor emphasized the importance of speaking out against “gender affirming care.”

“The vast majority of people in this country and in the world know full well that this is garbage,” he said. “Men are not women and women are not men. Surgically mutilating mentally ill children and adults is not ethical medical practice. And almost everyone knows that.”

The doctor acknowledged that “students are terrified” to agree with his stance and many professionals risk their careers by taking a stand against the ideology. However, he also encouraged medical professionals, parents, and other members of the public to do so, saying that, “if we all speak up, they [LGBT activists] will vanish.”

Egnor is not the only doctor to voice concerns over “transgender” medical procedures.

Over the summer, Florida’s medical board began the process of banning “gender affirming” drugs and surgeries for minors, citing the irreversible damage of the interventions.

Earlier this month, Dr. Jane Orient, the executive director of the Association of American Physicians and Surgeons, told LifeSiteNews that ethical standards previously prevented mutilating children in surgery. She was one of many criticizing a recent study promoting double mastectomies performed on young females.

‘The largest medical scandal in history’: Brave mom speaks out against pushing ‘trans’ drugs on kids