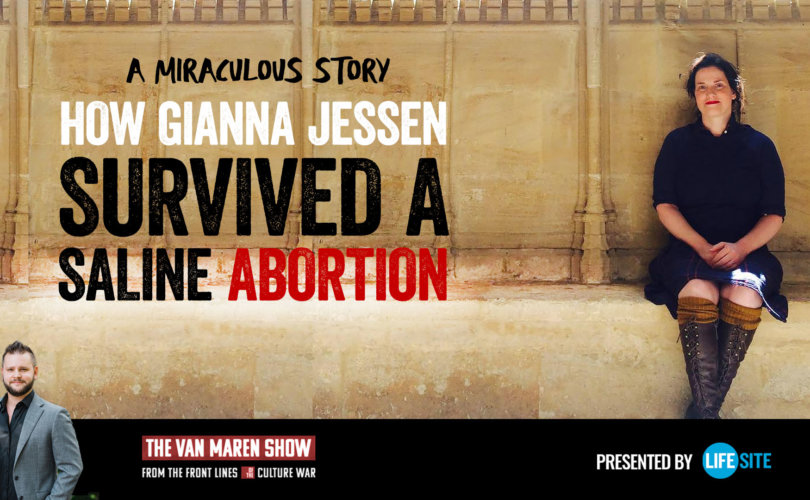 December 18, 2019 (LifeSiteNews) – In today’s episode of The Van Maren Show, Jonathon Van Maren speaks with Gianna Jessen, who survived a saline abortion and now uses her story to show people the inhumanity of abortion.

“I am alive. Just by the miraculous power of Christ,” she says.

Jessen has been mentioned in speeches by President George W Bush. The Archbishop of Canterbury and the Archbishop of Westminster have said that her story could impact the abortion debate.

Jessen was born during a saline abortion in a Los Angeles abortion facility at 29 weeks. Jessen was only 2.5 pounds when she was born, but she miraculously survived. She was born 18 hours into the saline abortion procedure. Saline abortions burn, blind, and suffocate babies, who are then born dead after 24 hours. Some physicians have compared the effects of saline solution on babies’ skin to the impact of Napalm, a dangerous long burning fuel, on soldiers in Vietnam.

Jessen praises God for saving her. She didn’t even need to be resuscitated when she arrived at the hospital – a true miracle. Jessen has cerebral palsy from the lack of oxygen to her brain during the saline abortion, but she considers her life a miracle.

Jessen was adopted after being in the foster care system for a few years. She was told that her parents were both 17 years old and when her mom was seven months pregnant she was referred to Planned Parenthood for an abortion. Despite the struggles of living with cerebral palsy, with the help of one of her foster mothers, Penny, Jessen was able to defy the odds. She was told she wouldn’t crawl, but she did. Then she was told she wouldn’t walk, but she did. She continued to defy the odds by not losing hope. Jessen calls Penny, “her favorite.” Penny fostered 56 children as a single mom and sought out the children with the worst disabilities who no one else wanted.

Jessen was 12 years old when she found out she is an abortion survivor. She had asked her adoptive mother why she had cerebral palsy many times, but never accepted her answers. On Christmas, Jessen asked again, and somehow knew the moment she asked. She followed her initial question with, “I was aborted, wasn’t I?”

Jessen refutes backlash and negativity she receives from abortion activists who call her a liar. Her records clearly state that she was born during a saline abortion.

Jessen tells listeners that she got into public speaking by following God. She doesn’t believe that she can “manipulate and control my way through life,” but leaves her path in God’s hands. She first shared her story at age 14 to about 10 people at a Mexican restaurant. Unbeknownst to Jessen, one of the attendees was a reporter for the Orange County Register. Her story was published and received international attention. She has traveled and spoken ever since.

Jessen speaks from the heart to all those who have had an abortion or played a part in one. She tells listeners that she doesn’t condemn them, she isn’t angry with them, she doesn’t hate them. She hurts for them and the pain they feel. She encourages anyone who has had an abortion to take that hurt and torment and give it to God.

Two weeks later, Jessen was greeted by a woman, “Hi, I’m your mother.”

Despite the heaviness this statement put on her heart, Jessen said, “Ma’am, you must need to know that I am a Christian and I forgive you.” Her mother retorted that she didn’t want her forgiveness and Jessen was an embarrassment to the family. Jessen’s biological mom had met Jessen’s adoptive mom. Her adopted mom told her that Jessen forgave her, but didn’t want to see her. Despite knowing this, Jessen’s biological mom still came to confront her that day at her speaking engagement.

Jessen sees her mother’s words as coming from a place of hurt and lack of control over Jessen and her situation.

“We can either choose to be defined by all the injustice in all of the terrible things that may or may not have happened in our lives, or we can be set free by Jesus,” Jessen tells listeners.

Van Maren tells Jessen that seeing her “is to actually glimpse face-to-face the people that abortion has taken from us.” It is this very powerful and moving sentiment that has lead Jessen to testify before Congress and numerous legislatures about the harms of abortion.

Jessen hopes that her speaking continues to open eyes and hearts. Jessen sees herself as a witness to the beauty of life, as both an abortion survivor, and as a disabled person.