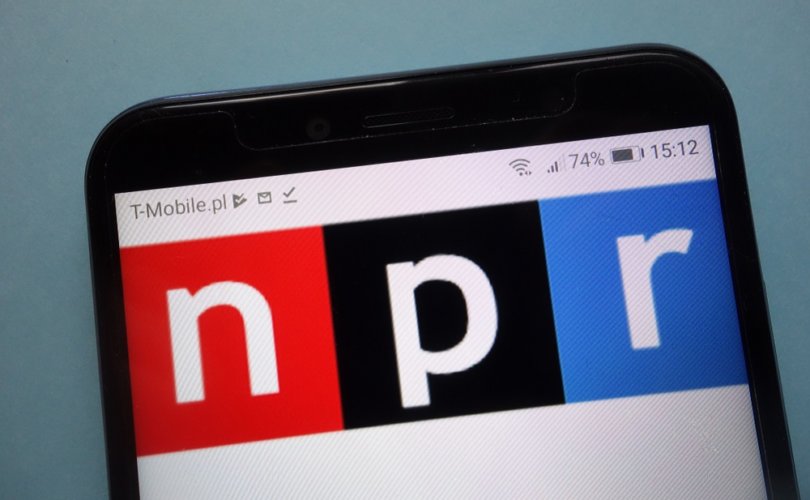 Disclaimer: The following article contains unsettling language and media about the reality of abortion.

(The Daily Signal) — On Thursday morning, NPR played an abortion on air.

“Like many patients at Northland, she said I could record her procedure,” Wells, a reporter, says of the mother in the NPR segment.

“Most patients are partially awake during the procedures, they get IV medication for pain and anxiety,” the reporter continued. “The lights are dimmed, there’s soothing music, it actually feels a lot like a childbirth, in a medical gown, your bare legs and stirrups, and a person next to you, saying, ‘You can do this.’”

I almost didn’t want to tweet this but it’s something everyone needs to know. NPR on the radio this morning played audio of a woman getting an abortion. You can hear the vacuum turning on, crying, moaning, and the doctor telling her it’s done.

In the background, the listener can hear the vacuum aspirator machine turn on. According to an October story Wells wrote about the incident: “The machine uses gentle suction to remove” the baby “from the patient’s uterus through a thin tube.”

The listener can hear the mother moaning over and over as the vacuuming noise continues.

“You did it,” someone finally tells her.

“Thank you guys so much,” the mother says weakly.

“You are welcome!” someone responds.

“You did great!” another person says cheerfully.

In her October piece for Michigan Radio, Wells notes that abortion clinics “are almost always closed to press.”

“But Michigan Radio got a rare degree of access to Northland Family Planning, a group of clinics in suburban Detroit,” she wrote. “For nine days in August and September, we shadowed a doctor and clinic staff through every step of the process.”

“Northland Family Planning gives every patient numbing medication applied to the cervix, and strong pain and anxiety medications (fentanyl and midazolam) administered intravenously,” Wells wrote of the abortion clinic. “Some patients also get a cervix softener a few hours before the procedure to make dilation easier, depending on how far along their pregnancy is.”

“Once a patient was fully relaxed, Lance would use a speculum to view inside the patient’s vagina, then clean the vagina and cervix with gauze and antiseptic,” she continued. “She then would dilate the cervix, while Brandee monitored the patient’s vitals.”

Wells disputed on Twitter that her story is pro-abortion:

The night before her abortion, Melissa dropped her kids off w/ grandparents, drove nearly 4 hrs, and got to a hotel in MI around 3 am. She’s part of the record surge of out of state patients coming to MI for abortions post-Roe. 🧵 https://t.co/NrRY6lurun

“Abortion is on the ballot in Nov,” she wrote. “I’d argue that getting to see what’s actually happening in clinics right now isn’t biased, it’s factual.”

“Last year, nearly 30k MI women got an abortion in this state,” she continued. “We’ve all heard a million campaign ads. We want our MI audience to have the opportunity to hear and see what’s actually happening directly, rather than from a political campaign. That’s what news should do.”

The NPR segment quickly sparked horror and condemnation from users on social media.

“This clip puts on full display the what an abortion actually is: violence and full on dehumanization of the unborn,” tweeted digital strategist Greg Price. “That’s why it’s important to share. To show reality.”

“So listen to that audio. It’s incredibly tough but it’s important,” he added. “Listen to it and then think to yourself about how the only pitch the Democrat Party is making to the voters in the midterm election is more of that.”

A recording of a murder.
Outlaw abortion now. https://t.co/t31F2FlrlE

“I’m going to caveat this tweet with the fact that I am have not and will not listen to it,” said commentator Bethany Mandel. “But this kind of tactic, showing Americans the reality of abortion, might really backfire.”

American Principles Project President Terry Schilling reminded Twitter users that Rush Limbaugh “did a stunt on his radio show where he told the listeners that he was going to play the sounds of an abortion.”

“In reality, he just turned on a vacuum and pretended,” Schilling said. “Listeners were disgusted. Can’t believe we’ve gotten the Left to expose themselves like this.”

NPR, Wells, Michigan Radio, and Northland Family Planning did not immediately responded to requests for comment from The Daily Signal.

A pop-up on Northland Family Planning’s website urges women to vote for Michigan’s Proposition 3, the Reproductive Freedom for All amendment, warning: “If we fail, Michigan may become like many other states where abortion is illegal, banning treatment for miscarriage management, ectopic pregnancies, IUDs, morning after pill, contraception, and even forcing doctors to delay lifesaving treatment. YOU CAN STOP THIS.”