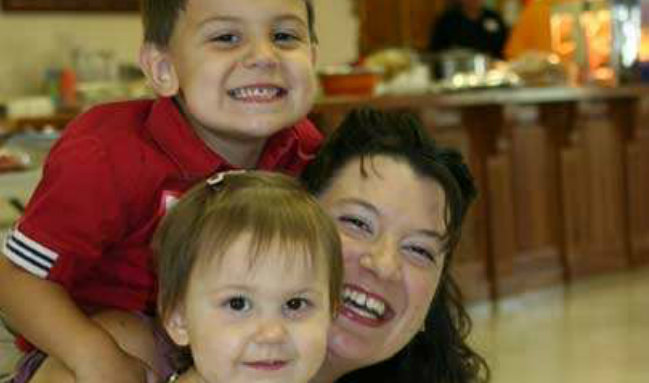 OWENSBORO, Kentucky, November 16, 2011 (LifeSiteNews.com) – During a routine self examination one morning, Erika Vandiver became apprehensive as she located a lump in her left breast. Just two months earlier, in February 2009, Erika and her husband Andrew had been overjoyed to discover that she was pregnant. This time the young mother was managing to hold onto the new life.

Prior to this pregnancy, 28-year-old Erika had suffered four miscarriages, the last one requiring her to be hospitalized for several days due to blood loss. “I was afraid another miscarriage would break my health or my spirit,” said Erika in an interview with LifeSiteNews.

The young married couple had kept the news of this pregnancy “close,” keeping their fingers crossed in the hope of giving their year-and-a-half old son Simon a brother or sister.

Erika’s obstetrician initially thought the lump was a clogged milk duct or some other pregnancy related swelling and told the young mother to keep an eye on it. But by June, the lump had become noticeably larger and more painful. At this point, Erika’s doctor ordered an ultrasound and biopsy.

The results that came in July were not good. The now 20-week pregnant mother was diagnosed with an aggressive form of breast cancer.

“I was quite frightened by the cancer diagnosis especially since I was pregnant. At that point, we still had not told anyone I was pregnant,” said Erika.

The news however, was not all bad. The ultrasound also revealed a perfectly formed little girl who had a delivery date of November 26th, American Thanksgiving. Andrew and Erika decided to name their unborn baby Rachel.

With her body being consumed by cancer while at the same time nurturing this new young life, Erika felt like she was “on the edge of a breakdown.”

The medical establishment presented Erika with the option of aborting her baby so as to begin the invasive cancer treatment that would save her life. Erika’s online research reinforced what the doctors had already laid out for her: keep the baby and wait for treatment (decreases survival odds for mother), or abort the baby and begin treatment immediately (increases survival odds for mother).

But the fighting spirit of a mother protecting her child ignited in the core of Erika’s being. After suffering the painful loss of four miscarriages, she knew she could never intentionally cause harm to her baby.

Erika chose to fight cancer and keep her baby. “There was no way I was aborting my baby,” she said adamantly.

For his part, Andrew never thought of choosing “one over the other.” His mind was set on giving to his wife his “full support and love,” and on “being positive about her medical care.”

The tumor in Erika’s breast turned out to be triple negative, not responding to any of the hormonal treatments—such as Tamoxifin—that her doctors had given her.

Chemotherapy was Erika’s next option. But the young mother says she was plagued by concerns. Would the chemo interfere with her ability to bond with Rachel? Would the incapacitating side effects of the treatment hurt her relationship with her husband and young son? How would she and her husband maintain intimacy once she was bald and utterly sick? As the main breadwinner for the family (Erika was a forensic biologist for her home state of Kentucky) how would the needs of the family be met?

Doctors, however, assuaged the pregnant mother’s worries on at least one crucial count, saying that the Adriamycin chemotherapy would have little or no effect on her daughter growing inside of her.

The burdened young mother and wife felt that she “just wasn’t as strong as necessary to keep going.” But in the midst of these heavy burdens, like a ray of sunshine, something unexpected happened: Erika’s eyes were opened to the reality of compassion that resides in the human race.

She says that it was the many Good Samaritans who came forward, just at the right time, and who sustained her and her family. Sometimes the Good Samaritan was a doctor, an anonymous co-worker, a relative, a friend, or even a complete stranger.

“During my journey I’ve seen people go out of their way to be kind, loving, compassionate, and supportive. Complete strangers have donated money, said prayers, and supported me through this journey with no thought of themselves.”

In the midst of the painful cancer treatment, and the uncertainty of how to pay the bills and where the next meal was coming from, Erika also says she found consolation in her faith. “My Faith has given my journey a meaning,” she said, saying it gives her “hope in the redemptive nature of suffering.”

Erika’s fight with cancer and her struggle to bring her baby to term taught her how blest she truly was. “It’s kind of sad that until something bad happens, most people (myself included, sadly) never really see all the good that people in the world accomplish.”

She also learned that accepting help can actually make one stronger. Prior to her illness she had been quite independent and strong, she says, but now she learned that in refusing help, she was actually weakening herself.

The Meaning of Thanksgiving

Erika’s third regimen of chemotherapy treatments in September made her feel “miserable, whiny, grumpy, and bitchy.” She began to have frequent nightmares involving Rachel, which would cause her to wake up suddenly in the middle of the night, her body shaking uncontrollably. She would try to make the little girl in her womb move so as to dispel the horrific dream that the umbilical cord had somehow wrapped around the baby’s neck, squeezing all life out of her.

Regular visits to the doctor always confirmed that Rachel was alive and kicking and doing well despite the mother’s severe cancer treatment.

Finally the November 26th due date arrived. The waters of the now hairless mother broke right on schedule. Rachel arrived after just 3 contractions. The 8.4 pound girl had black curly hair. She passed all of her tests with “flying colours.” Andrew and Erika were ecstatic. Despite Erika’s body having been saturated with the cancer drug for four months of the pregnancy, little Rachel had managed to come out on top.

“I know you’re lucky,” Andrew whispered to his precious daughter minutes after she was born.

Erika believes that a terrible diagnosis while pregnant does not have to pit a mother against her child. “Rachel is the most obvious positive aspect of this journey. She is happy, healthy, very active, and very much a blessing.”

Birgit Jones, Erika’s mother, thinks that her daughter’s story has something to say to sick pregnant mothers who are being told by their doctors that they must choose between their own lives and those of their unborn babies.

“The vast majority of women (and doctors, it seems) simply are not aware of the option of treating cancer while pregnant and that it has been successful for twenty plus years,” said Birgit in an interview with LSN.

As a mother who beat cancer and kept her baby Erika encourages any mother facing a difficult diagnosis while pregnant to “stop, think, pray, and do a ton of research before considering termination,” adding that there is “no reason to rush into a decision without knowing all the facts.”

Erika’s journey to health remains unfinished. “Just because I am a ‘survivor’ does not mean my battle is over,” she says. Since the delivery two years ago, she has undergone a bilateral mastectomy to ensure that all the cancerous cells were gone from her body, ovary removal (with serious complications), an emergency hysterectomy, and restorative breast surgery.

This past month, the young family’s financial situation has become so bleak that Andrew and Erika were forced to take steps toward bankruptcy.

Despite these woes, the family is glad to be together, all of them alive.

You can help Erika and her family financially survive their journey through her blog: Erika’s Miracle Journey. She also welcomes prayer support.