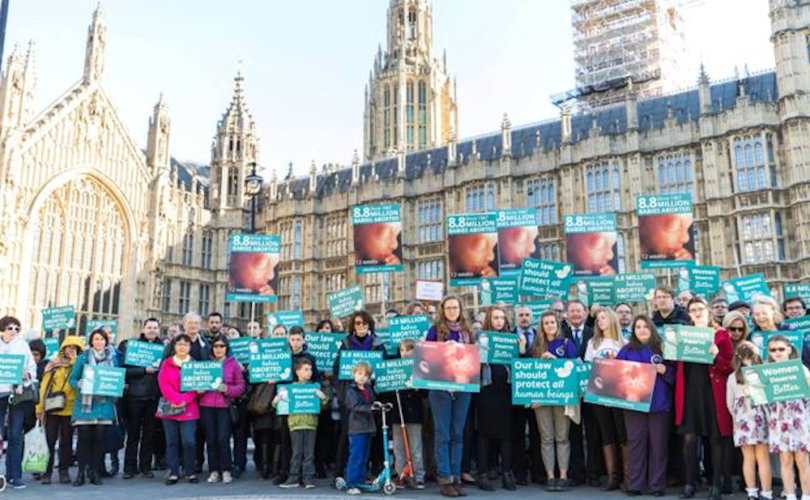 UNITED KINGDOM, October 27, 2017 (LifeSiteNews) — Right-to-life activists are mourning the 50th anniversary of Britain’s Abortion Act today. The Act, which made abortion legal in England, Wales and Scotland, was given Royal Assent on October 27, 1967.

Crowds met outside Parliament in London this morning for a minute of silence to honor the more than 8.8 million unborn babies who have been killed in the United Kingdom since the Act was signed. In Scotland last night, 350 people gathered in Glasgow’s George Square for a commemorative vigil. Six hundred attended a special Mass afterward in St. Andrew’s Cathedral.

“Today is a tragic day,” Margaret Akers of the Society for the Protection of Unborn Children (SPUC) Scotland told LifeSiteNews. “It is more important than ever that we continue to affirm the dignity of life for all, particularly the unborn.”

Akers was”reassured” to see so many people at the special services in Glasgow, “not losing hope that we can change things.”

In a meticulously written piece for the Catholic Herald, David Alton, Baron Alton of Liverpool, laid out the history of the Abortion Act and catalogued its devastation:

“A law which was intended to allow abortion in certain circumstances became an elastic law, a law with catastrophic consequences. … Those 29 MPs who voted against its Second Reading did so because they contested the repeated claims that the law would only be used in extreme and tragic circumstances. They were right.”

Fifty years later, “a staggering 8,894,355 born babies have lost their lives — one death every three minutes,” Lord Alton observed. He mentioned also the death of a mother who died after an abortion in a Marie Stopes clinic.

The pro-life politician highlighted the profits abortion brings those willing to perform the grisly deeds. In just the past decade, “£757,832,800 of taxpayers’ money has been paid to the private sector abortions,” Alton wrote. “The Times reported that the boss of Marie Stopes International (MSI) — which we pay millions of pounds to carry out abortions in Britain and overseas — received a phenomenal £420,000 in one recent year alone (four times the Prime Minister’s salary). Twenty-two of the employees were paid more than £100,000.”

But there have been other, more subtle, kinds of damage done to British society in the wake of the Abortion Act. Alton went on to list the subversion of the British medical profession, which has dropped the Hippocratic Oath because of its “explicit condemnation of abortion,” the erosion of conscience rights; the attacks on the free speech of those who are pro-life; and the firings of “non-compliant” journalists, pharmacists, environmental scientists, blue collar workers and social workers. Pro-life MP Jacob Rees-Mogg has also come under fire for defending the unborn’s right to life.

“Political parties have made (abortion) a question of ideology,” wrote Alton. Summing up his catalogue of horrors, Alton said it smacked “of a coercive liberalism worthy of a totalitarian state.”

Alveda King, niece of American civil rights hero Martin Luther King, also made a statement on the occasion of the 50th anniversary of the Abortion Act. Seven years ago, she recalled, King told UK legislators that the pro-life movement is the “new civil rights movement.”

(b) that the termination of the pregnancy is necessary to prevent grave permanent injury to the physical or mental health of the pregnant woman; or

(d) that there is a substantial risk that if the child were born it would suffer from such physical or mental abnormalities as to be seriously handicapped.

Abortion is not legal in Northern Ireland.