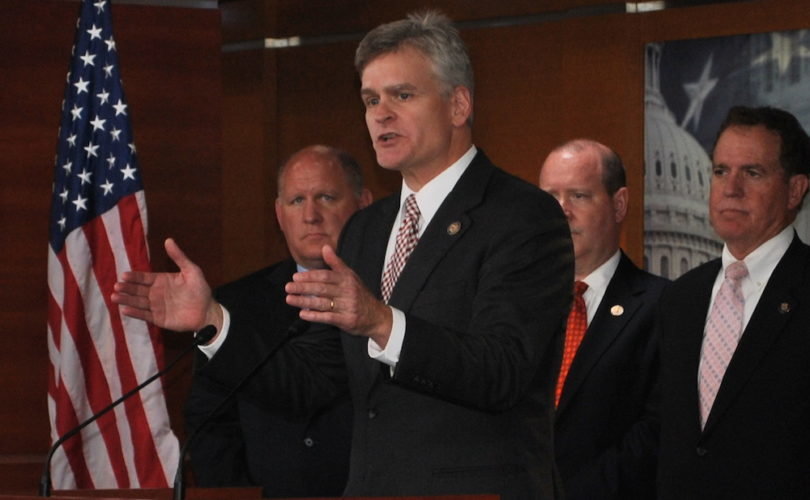 WASHINGTON, D.C. – Pro-life Congressman Bill Cassidy, R-LA, has announced he will soon be a grandfather, as his unmarried 17-year-old daughter is pregnant with a baby due later this summer.

Cassidy, who is challenging pro-abortion Democrat Mary Landrieu for the U.S. Senate seat she has held since 1997, made the announcement in a press release late last week.

“Earlier this year, Laura and I learned we will become grandparents this summer,” Cassidy wrote. “Our children have been the greatest blessing of our lives and we welcome our grandchild as a joyous addition to our family. Our daughter now faces a more challenging future than her peers. She has our unconditional love and support.”

Cassidy, a physician and a member of the Bipartisan Pro-Life Caucus in the U.S. House, has long been a strong advocate for adoption.  In January, he spoke to the Louisiana March for Life on the theme, “Adoption: The Power of Possibility.”  However, based on last week’s statement to the press, it appears his daughter, a high school senior, intends to raise her baby.

A call to Cassidy’s campaign office seeking to clarify the family’s long-term plans was not immediately returned.

Some of Cassidy’s liberal critics have pointed to his daughter’s pregnancy as “proof” that the candidate’s preferred “abstinence-only” approach to sex education is a failure.  They called on the congressman to renounce his support for the Abstinence Education Reallocation Act – which would offer federal grants for pro-abstinence educational programs – and instead advocate for taxpayer-funded contraceptives for teenagers.

“Government funding of abstinence only education in public schools is policy based on religious doctrine and is unconstitutional,” wrote Ronald DeGrove for Firebrand Progressive.  “This whole notion of saving sex for marriage is a religious notion and not based on science.”

“Abstinence is another example of the failure of Republican policy at the expense of the American taxpayer,” DeGrove added. “Laws aimed at controlling sexual behavior as well as laws intruding into the reproductive rights of women are all based on the premise that sex is somehow dirty or deviant if done outside the religious definition of marriage.”

Another author at the liberal Daily Kos blog wrote, “Rep. Cassidy (R) should come out against teaching abstinence only and join the real world reality that teens need to be taught about different types of contraception.  I don't know if Rep. Cassidy's daughter wanted to get pregnant, nor do I care.  But, there are plenty of un-wanted pregnancies that could be avoided if young girls were educated on contraception alternatives that reduce un-wanted pregnancies and given access to low and/or no-cost contraception … both of which Rep. Bill Cassidy opposes.”

“Teaching abstinence only does not reduce unwanted pregnancy and neither does putting asprin between your legs,” the author added.

While progressives continue to promote contraceptives as a foolproof way to prevent unwanted pregnancies and abortion, recent studies have found the opposite.

“We have known for years that teaching abstinence changes lives,” Leslee Unruh, founder of the National Abstinence Clearinghouse, told LifeSiteNews upon the study’s release.  “Abstinence education treats the whole being, teaching youth to respect themselves, set goals, avoid risky behavior to have a healthy future.”

Meanwhile, a recent study by the U.K.’s largest abortion provider revealed that fully two-thirds of women who sought to abort unwanted infants at their facilities were using contraceptives when they became pregnant.

“Ultimately women cannot control their fertility through contraception alone,” confessed Ann Furedi, CEO of the British Pregnancy Advisory Service (BPAS) abortion business.  “[They] need accessible abortion services as a back-up for when their contraception lets them down.”