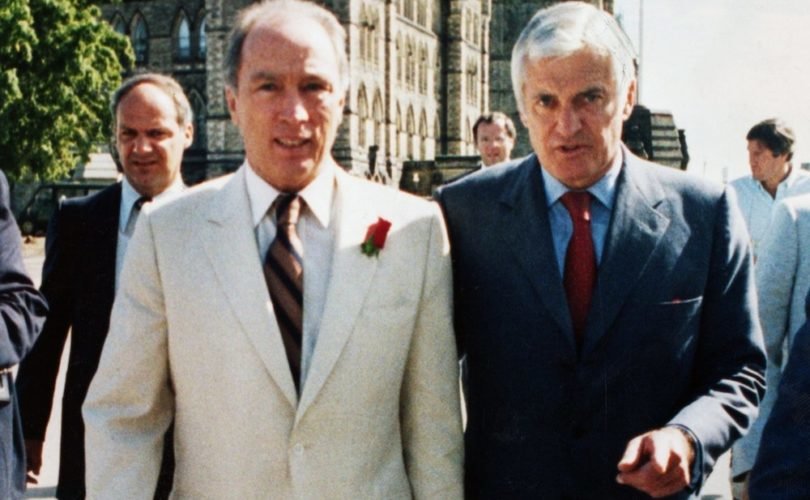 OTTAWA — While Liberal Party leader Justin Trudeau lauds the example of his deceased father and former Prime Minister Pierre Trudeau to buttress his own hardline support for what he believes is a woman’s unquestionable “right” to abortion, a 1972 newspaper clipping has surfaced suggesting Pierre may not have shared his son’s convictions.

“You would have to convince me that a person who asks for an abortion has no responsibility at all,” Pierre Trudeau told the Montreal Star in 1972, three years after the passage of his much-criticized 1969 Omnibus Bill that legalized abortion.

The late prime minister’s comments were made in the midst of a federal election campaign in response to abortion activists protesting the new law, which allowed abortion with the consent of a three-member ‘therapeutic abortion committee’ setup in hospitals.

“You know, at some point you are killing life in the foetus in self-defence – of what? Of the mother’s health or her happiness or of her social rights or her privilege as a human being,” Trudeau said at the time.

“I think she should have to answer for it and explain. Now, whether it should be to three doctors or one doctor or to a priest or a bishop or to her mother-in-law is a question you might want to argue. … You do have a right over your own body – it is your body. But the foetus is not your body; it’s someone else’s body. And if you kill it, you’ll have to explain,” he said.

Conservative MP Maurice Vellacott, who found the quote in French and had it translated last week, said that it shows Pierre Trudeau “disagrees” with his son on abortion.

“I think you will find this quote from Pierre Trudeau very interesting in light of his son’s adamant and unequivocal support for a woman’s right to abortion on demand,” he said in a release.

The Supreme Court eventually, on a technicality, struck down Pierre Trudeau’s 1969 law as unconstitutional in the 1988 Morgentaler decision, ruling that it violated a woman’s Charter right to security of the person since the law could not be applied equally across the country. However, the court encouraged Parliament to draft a replacement abortion law.

A controversial attempt the following year by the Mulroney government, which was vastly weaker than the original Trudeau legislation, was eventually defeated in an unusual tie vote in the Senate. With no law governing abortion, the country has since then been in a lawless situation where abortion is permitted for any reason through all nine months of pregnancy.

Faye Sonier, blogging at ProWomanProLife, commented that the “quote doesn’t leave Pierre Trudeau quite the pro-choice hero, does it?”

Despite being the moving force behind legalized abortion, Pierre Trudeau’s remarks on the subject often appear contradictory and even irrational. He admitted in 1976 that he is “against abortion” since it kills what he calls an “infant in the womb” who is a “living being.” At the same time, however, he called his 1969 abortion law “good.”

“I consider the fetus, the infant in the womb is a living being, a being we must respect, and I do not think we can kill him arbitrarily,” he stated at that time while visiting Edmundston, New Brunswick.

“There are cases where killing is legal. … There are cases when it is legal to kill even an infant, but I am saying, when we kill … we must answer to society. That is why our Omnibus Bill requires three doctors. … They are more competent than I, as regards to mental and physical health and I think it is a good law. It is easy for us men to be against abortion. I am against abortion. But I've never been pregnant, illegitimate or otherwise. … I believe we must listen to the woman's side of the story,” he said.

The Toronto Star quoted Mr. Trudeau in 1982 saying: “I think that generally speaking, abortion is wrong.”

However, Jim Hughes, national president of Campaign Life Coalition, told LifeSiteNews that despite the elder Trudeau’s conflicting remarks, he believes Pierre would “be the same as Justin” if he were alive today and in Justin’s shoes.

Nevertheless, Hughes said he thinks Pierre Trudeau never expected abortion numbers to skyrocket as they did after his 1969 law was passed. “I don’t believe for a moment that he would have expected that this number of children would have been killed. I think he believed that this [new law] was only a mere regulation, a small change in how things were happening.”

Justin Trudeau came under fire from both sides of the abortion debate last month when he announced in a scrum that only “pro-choice” candidates would be permitted to run in his party’s “open” nominations. Facing criticism, the Liberal leader turned to his father’s example to justify his own position.

“I had an extraordinary example in a father who had deeply, deeply held personal views that were informed by the fact that he went to church every Sunday, read the Bible regularly to us, and raised us very religiously, as Catholics. But at the same time my father had no problem legalizing divorce, decriminalizing homosexuality and moving in ways that recognized the basic rights of the people,” he wrote in the preface of a pledge to support a “woman’s right to choose.”

Margaret Somerville, director of the Centre for Medicine, Ethics and Law at McGill University, wrote in the National Post last month that upon learning of Justin Trudeau’s abortion edict, her first thought was, “‘His father would be appalled’ – or, as one person wrote to me, ‘Pierre would turn in his grave.’”

“Such an edict by a leader of a political party on a matter of conscience relating to one of our most fundamental values – respect for human life – violates the basic principle that MPs are primarily their constituents’ representative in Parliament on such matters, not their leaders,’” she wrote.

Trudeau clarified last week that existing MPs will be forced to toe the party’s line when voting on the abortion issue.

Ottawa archbishop on Trudeau: If you dissent on life issues, you’re not a Catholic in good standing
‘Undemocratic,’ ‘intellectually bankrupt’: former Liberal pro-life MP slams Trudeau’s abortion edict
Trudeau’s ‘admiration’ of China’s brutal ‘dictatorship’ learned on the knees of his father
‘We will be whipping the vote:’ Trudeau says he will force Liberal MPs to vote pro-abortion

Liberal MP promises to vote pro-life, then flip-flops after Trudeau steps in