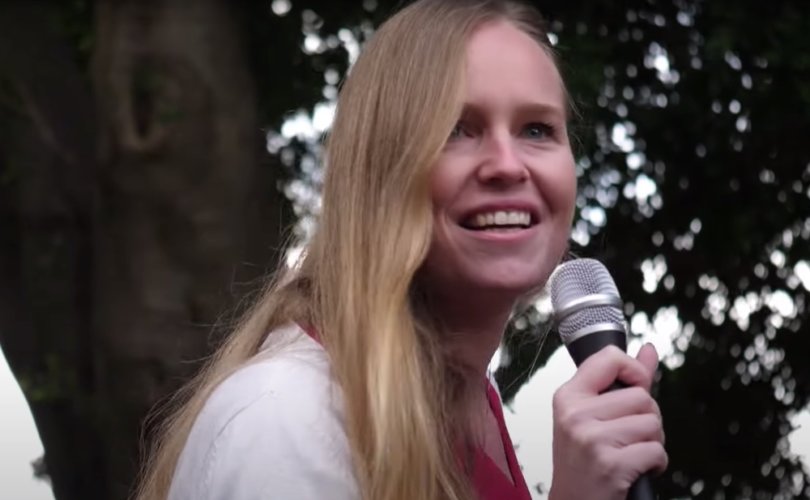 Smit has been one of Australia’s leading voices in pushing back against her government’s harsh authoritarian response to COVID-19, championing the cause of liberty against the draconian measures that have been imposed upon millions of Australians since March 2020.

“It was outrageous for Vic Police to try to impose unreasonable & undemocratic bail conditions that kept Monica a political prisoner,” Kelley added, calling Smit’s release “A win for JUSTICE.”

Smit had been taken into custody on charges of “incitement” August 31, after violence erupted between police officers and protestors at an anti-lockdown protest organized by Reignite Democracy Australia (RDA), the group founded by Smit to rally Australians to resist totalitarian COVID policies.

According to Rebel News, “[t]he court was unable to make a connection between Smit’s advocacy for ‘freedom’ and isolated acts of violence within the protest.”

Smit served 22 days in jail before being granted bail Wednesday.

The trailblazing activist’s release came after she rejected an earlier offer of bail which contained conditions her lawyers called “onerous” and said would have undermined her mission and the rights of Australians generally.

As reported by Kathy Clubb with the Remnant, “[t]hese bail conditions, as set down by a Melbourne Magistrate on September 1, included that Monica must not share ‘any material which incites opposition to the Chief Medical Officer’s directions …’; not disclose the identity of police officers involved in her case; and that all groups and social media accounts related to RDA are to ‘remove any materials which incite opposition to the Chief Health Officer’s directions.’”

After rejecting the initial bail conditions, Smit ultimately filed an application for a “variation” with the Supreme Court of Victoria.

Her request was finally accepted and bail was granted by the court on September 22, just over three weeks after her arrest.

In the bail hearing with the Supreme Court Wednesday, Justice Elizabeth Hollingworth observed that the maximum penalty for the charges lodged against Smit, incitement and failure to obey the directions of the Chief Health Officer, generally consist of a fine, not imprisonment.

Declining nonetheless to offer unconditional bail, Hollingworth said “in the current climate, there is undoubtedly a real risk of [Smit] re-offending.”

“However, I am satisfied that the risk of her further offending and endangering the safety and welfare of others can be reduced to an acceptable risk with the imposition of some conduct conditions,” the judge said, adding that “those conditions will be more limited than those that had been sought by the police or imposed by the magistrate.”

Under the new conditions, Smit must not disobey Section 203(1) of the Public Health and Wellbeing Act and must not “incite” anyone else to violate the act.

The section cited by the judge states that “[a] person must not refuse or fail to comply with a direction given to the person, or a requirement made of the person, in the exercise of a power under an authorisation given under section 199.”

— Article continues below Petition —
PETITION: Ban COVID vaccine mandates for schools and universities!
Show Petition Text
42850 have signed the petition.
Let's get to 45000!
Thank you for signing this petition!
Add your signature:
Show Petition Text

Smit is also forbidden to publicly identify the police officers involved in the case, but is permitted to name them in private communications with her attorneys.

The new conditions do not require Smit to scrub her social media accounts of content encouraging opposition to COVID measures, as was previously suggested by the Melbourne magistrate and Victoria police.

“It’s fine, I’m fine,” Smit assured her followers in a video posted to social media after her release Wednesday. “We have a really strong legal team and the legal battle isn’t over.”

“I just want all of you to know that today was actually a win,” the pro-freedom activist said. “I haven’t been silenced. And that’s what they wanted to do, in my opinion.”

Th feel good story of the day is Monica Smit’s release from jail after a win in court which adjusted the draconian bail conditions originally set in her case.
She has not been silenced and her group Reignite Democracy Australia will carry on.
She looks and sounds amazing. pic.twitter.com/0CtRHoPviz

The 33-year-old traditional Catholic has been a vocal opponent of the strict and brutal lockdowns which have crushed Australians’ civil liberties since March of last year.

Smit has led, organized, and addressed dozens of rallies, urging the abolition of mask mandates, curfews, and stay-at-home orders while encouraging her fellow Australians to get involved in the political process and oust corrupt politicians.

Smit’s organization, RDA, also provides Australians a free-speech platform to communicate with one another while rallying participants to take political action.

A fundraiser set up on the RDA website on behalf of Smit following her arrest has brought in over $300,000 to support her in her ongoing legal fight.

In the video posted to social media just after her release from custody, Smit shared words of encouragement to her followers and others involved in the movement for freedom from COVID lockdowns and mandates in Australia.

“I think every single person has a little more strength inside them than they think they do, and sometimes it just takes a little bit of encouragement to look deep within yourself and find that strength that you maybe didn’t know you had,” she said.

Smit is set to appear before the Melbourne Magistrates Court on November 10, 2021.