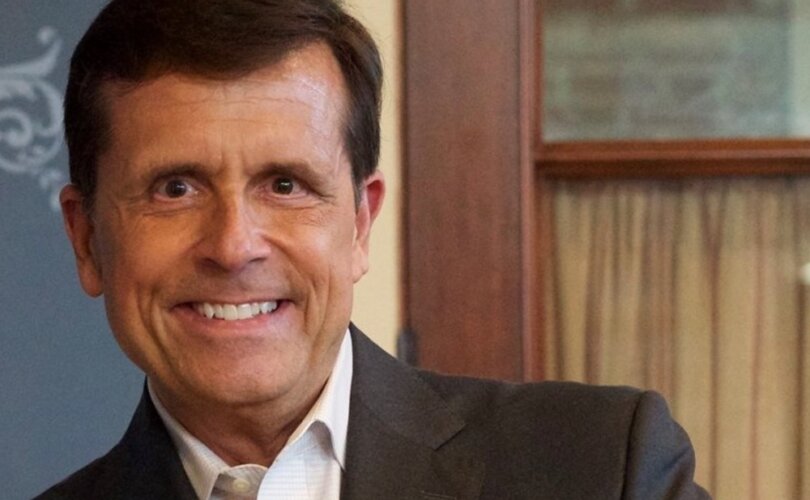 DETROIT (LifeSiteNews) – After more than 50 years away from his childhood faith, a former TV personality and non-denominational pastor in Michigan has announced his return to the Catholic Church.

64-year-old Chuck Gaidica, the former pastor of a booming non-denominational parish in Novi and a well-known TV personality in Detroit for 40 years, told LifeSiteNews in a recent email that he has finally returned to his Catholic roots after leaving the Church behind at 10 or 12 years old.

“God’s whispers and nudges continued to guide me home toward a decision,” Gaidica said.

Back in October, Gaidica spoke on his journey home to Catholicism in a speech at Holy Trinity parish in Port Huron. During his speech, which he entitled “The Long Journey Home,” Gaidica described the “breaking news” of his conversion, revealing that it began after giving a talk at that very church 8 years before, when an elderly woman approached him and told him to “come back to the Church.”

“The evening was over; I’d done my talk and answered some questions,” Gaidica related to his Holy Trinity audience. “I was standing over by some people when this lady walked out, an older lady, older than me. She walked up, and as I extended my hand, she took my hand, grabbed my forearm, and looked at me and said, ‘You have to come back to the Church.’”

“But that was fully eight years ago,” he said.

— Article continues below Petition —
Stand with faithful Archbishop Timothy Broglio as the NEW President of the United States Conference of Catholic Bishops!
Show Petition Text
9113 have signed the petition.
Let's get to 10000!
Thank you for signing this petition!
Add your signature:
Show Petition Text

Gaidica told LifeSiteNews in his email that his journey of conversion began to pick up speed just before the pandemic, when, although surrounded by good people and attending a Nazarene Church with his wife, he still felt as though something was missing.

“But in the end, I missed the fullness of the faith…the Catholic Church,” he added.

Gaidica told LifeSiteNews that he finally knew fully that the Catholic faith was his true home when one day, as he was driving in his car, he asked God, “How could I ever come back to the Catholic Church?”

“Why not? The Church never left you,” was the reply he received.

“I was stunned and immediately knew this was an answer—maybe THE answer I was looking for in my journey,” Gaidica said.

Gaidica related that supportive family and friends, as well as Catholic clergy and media outlets such as LifeSiteNews, all played a crucial role in supporting and informing him throughout his journey back to the faith.

“Even though my wife is not quite on the same journey or timetable coming home yet, she has been so supportive and encouraging of my journey,” he said.

“So much Catholic media (including LifeSiteNews) informed and inspired me along the way,” he continued.

“God also placed Catholic friends, a few priests and even a Catholic Marriage Cruise last January in front of me. Finally, this past May I came back to the church.”

Gaidica emphasized to LifeSiteNews that he believes it is never too late for a lapsed Catholic to return home to the faith. God was patient with him, he told LifeSiteNews, and He would be patient with others.

“I would tell people to consider that no matter how long you or a loved one has been away from the Catholic Church, it is never too late,” he added.

“God and the Church were being patient,” he said. “God was still right there with His arms outstretched saying ‘Come back home’.”

Gaidica told LifeSiteNews that his journey of reversion was difficult.

“The reversion was not easy, and that is part of the reason it took several years to complete,” he explained. “I felt like I was wrestling with God like Jacob at times.”

However, despite these challenges, Gaidica expressed joy in his renewed commitment to the Catholic faith.

“I am so very happy,” he told LifeSite. “And to be honest, I have found myself getting more emotional at Mass than during other church services. When at Mass, there is a deep sense of being part of something special. It has such weight. I am also happy attending a Mass with newfound friends and even old friends who are Catholic.”

Gaidica said that he knows that he has found his true home in the Catholic Church.

“My spirit feels centered,” he said. “And this is not just an emotional response. I truly know I have come home, and there is nothing like it.”

Gaidica told LifeSiteNews that the Eucharist is where he ultimately found peace amidst a stormy world.

“In the end, while the world seems to be a place filled with storms of life, I found great peace in returning to a Church where the summit of our faith is the Eucharist,” he said.

“I found great beauty in parishes and the faith itself. I was missing that in my life. I found great comfort in the prayers, creeds, liturgy, and even the incense and stained glass,’ he continued.

“Jesus is present in every Mass and He wants to be in relationship with me. He is saying that I matter. If people today ever needed to feel loved and know that they matter, this is such a time.”