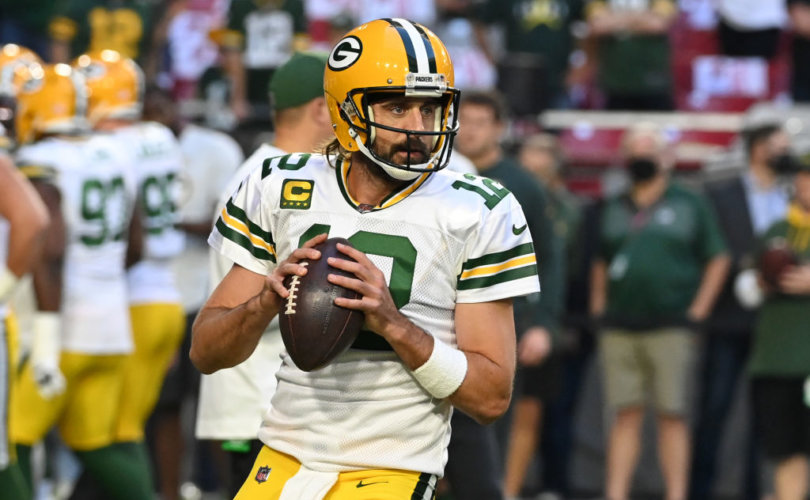 GREEN BAY, Wisconsin (LifeSiteNews) — Green Bay Packers’ quarterback Aaron Rodgers sat out his game on Sunday after testing positive for COVID-19. The positive test has prompted aggressive media questions about whether Rodgers misled reporters and the NFL when asked about being vaccinated.

Rodgers pushed back against critics of his decision not to take a pharmaceutical company’s vaccine and said he has been using ivermectin for treat COVID during an interview on Friday with former NFL punter and podcast host Pat McAfee.

“I realize I’m in the crosshairs of the woke mob right now,” Rodgers told McAfee on Sunday. He started by addressing the “blatant lies” aimed at him.

“I didn’t lie at the initial press conference,” Rodgers said, calling out the “witch hunt” from the media about whether NFL players were jabbed or not. He had been criticized for saying he was “immunized” when asked about his vaccination status in August.

“I put a lot of time and energy in research and met with a lot of different people in the medical field to get the most information about the vaccines before making a decision,” Rodgers said. He has an allergy to an ingredient in the mRNA vaccines and said he followed the Centers for Disease Control and Prevention guidance to not take the jabs if someone has an allergy.

The Johnson and Johnson jab does not contain that ingredient, but he said he had heard about adverse reactions to the shot which concerned him. In April, he noted, the shot’s distribution was paused due to clotting issues.

He pursued a “long term protocol” of alternative immunization. Football officials knew about his medical decision to pursue an alternative route.

Rodgers said he hopes to have children and said there are concerns about the long-term effects of the jabs on sterility. He presented 500 pages of research to the NFL about the efficacy — or lack thereof — of the COVID shots, as well as the protection of antibodies.

Rodgers said he has been consulting with podcaster Joe Rogan about treatment and has been using ivermectin, as well as Vitamin C and zinc to manage his symptoms.

“And I feel pretty incredible,” the Green Bay quarterback said.

“You know we’ve given away billions of dollars to these pharmaceutical companies now for these for these vaccines and it’s not going to stop … Pfizer’s coming out with a pill that’s going to help you know it’s it’s basically the expensive versions of ivermectin,” Rodgers said. “Why do people hate ivermectin? … You can’t make any money off of it.”

Ivermectin and the new Pfizer drug act in similar ways but are not of the same chemical formula. Both drugs are considered “protease inhibitor[s],” a type of antiviral drug that stops infectious viral particles, for diseases such as HI, from replicating.

“I’m not going to judge those guys. There’s guys who have been vaccinated who have contracted COVID. It’s an interesting issue that I think we’re going to see played out the entire season,” Rodgers said.

“I think everybody has to make their own personal decision, and that’s just is what it is,” head coach Matt LaFleur said when asked if he considered Rodgers to be selfish for his personal choice.

He pointed out that Rodgers had been following the protocols for unvaccinated people after having his request for alternative recognition denied.

McAfee said that Rodgers did not lie and followed the protocols for unvaccinated people.

In August, Buffalo Bills wide receiver Cole Beasley, who was unvaccinated, had to quarantine after testing negative for the coronavirus because he came into contact with a fully vaccinated trainer who tested positive for the virus.

It’s not guaranteed that if Rodgers had taken COVID shots he would not have contracted COVID-19.

More than 75 percent of Vermont COVID deaths were from people considered “fully vaccinated” in September.

Baltimore Mayor Brandon Scott had belittled people who chose not to get injected while explaining his decision to reinstate mask mandates in August.

“If you’re not vaccinated, shut up,” Scott said. “For anyone that’s frustrated about wearing a mask, and not vaccinated, then look in the mirror. It’s your fault that we’re going back to having an indoor mask mandate,” he said, furthering the “pandemic of the unvaccinated” narrative.