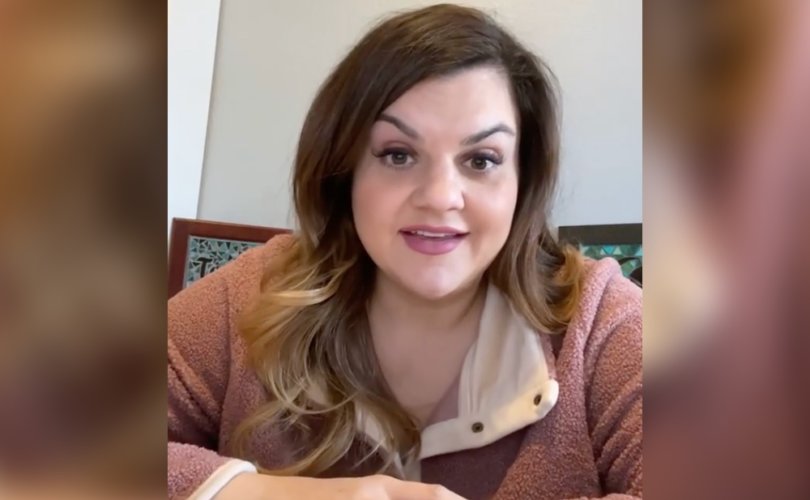 Johnson, who converted to Catholicism in 2013, also accused the bishops of “talking out of both sides of their mouth” by saying that abortion is evil, but that it is “okay” to take an abortion-related vaccine if there are no ethical alternatives available, all while exhorting Catholics to lobby for ethical alternatives.

The United States Conference of Catholic Bishops (USCCB) document “Moral Considerations Regarding the new COVID-19 Vaccines,” released on December 14 cites the “gravity of the current pandemic and the lack of availability of alternative vaccines” as “sufficiently serious” reasons to accept the Pfizer and Moderna COVID-19 vaccines “despite their remote connection to morally compromised cell lines.”

The bishops added that doing so is “an act of love of our neighbor and part of our moral responsibility for the common good.”

“I have a real problem with the USCCB coming out and saying that that, you know, there is a distant connection between abortion and some of these vaccines that we are injecting into our bodies, as if that makes the abortion acceptable,” said Johnson, whose conversion from a Planned Parenthood abortion facility director to pro-life advocate was dramatized in the movie Unplanned.

The bishops “talk out of both sides of their mouth because they say, well, abortion is evil and we should not compromise with evil, but I guess it’s okay in this situation,” and at the same time they tell Catholics to lobby for ethical alternatives.

Johnson quoted the USCCB document: “Failure to adequately protest and or to demand alternatives to these vaccines can contribute to moral complacency on this critical issue. This can encourage people to continue to justify and to benefit from the destruction of human life via elective abortion.”

But the fault is with the bishops for not taking an unequivocal stand, she said.

The reason why pharmaceutical giants haven’t stopped using aborted fetal cell lines in vaccine development is “because the leadership of the Catholic Church is too cowardly to stand up and say no more. That’s why it hasn’t happened,” contended Johnson.

“As long as the largest religious organization in the world, the Catholic Church, continues to require the laity to protest while the leadership accepts these vaccines borne on the backs of aborted babies, as long as they require the laity to be the ones to protest while the leadership falls in line like a bunch of sheep, Big Pharma will continue to ram these research protocols through,” asserted Johnson.

She also disputed the distinction the bishops made between COVID-19 vaccines tested on an aborted fetal cell line, and those produced or developed using such a cell line.

“That’s ridiculous. If abortion was used in any part of the manufacturing or production of this vaccine, the Catholic Church, especially in all Christians, should be saying, no, we don’t want any part of it,” Johnson said.

The USCCB document stated that the Pfizer-BioNTech vaccine, which the FDA approved for emergency use last week, and the Moderna vaccine, which is reportedly on track for FDA emergency use approval this week, were neither designed, developed, or produced using fetal cell lines, but were tested using the “morally compromised HEK293 cell line,” which was derived from a baby aborted decades ago.

“Thus, while neither vaccine is completely free from any connection to morally compromised cell lines, in this case the connection is very remote from the initial evil of the abortion,” the bishops said.

However, in the case of Moderna, the bishops’ document contradicts the Children of God for Life, which states that Moderna “extensively” used the “aborted fetal cell line HEK-293 … in numerous patents in the fundamental design of mRNA technology and in the original vaccine research, development, production and testing.”

The bishops state that the AstraZeneca COVID-19 vaccine is “more morally compromised” because the HEK293 aborted fetal cell line was used in its development and production, “and so this vaccine should be avoided if other alternatives available.”

However, if “one does not really have a choice” and if refusing the AstraZeneca vaccine would lead to “lengthy delays in immunization,” then it is morally permissible to take the vaccine, the USCCB document said.

Johnson expects to be criticized for “going against the bishops,” she said.

“Well then so be it, because the USCCB has flown the coop a long time ago,” she said, adding that their credibility took a hit when they congratulated Joe Biden “an actively pro-abortion person,” on “being the president elect,” she said.

“And then they send out a letter saying it’s acceptable for us to inject ourselves and our children with vaccines that are borne off the backs of aborted babies tells me that they have absolutely no credibility and that we should not be listening to them,” Johnson added.

“Any link to the abortion process, even the most remote and implicit, will cast a shadow over the Church’s duty to bear unwavering witness to the truth that abortion must be utterly rejected,” they stated, adding that the “ends cannot justify the means.”

The prelates also criticized statements from other bishops seeking to justify the use of abortion-linked vaccines on the basis of “remote and material cooperation” as “extremely anti-pastoral and counterproductive, especially when one considers the increasingly apocalyptic character of the abortion industry, and the inhuman nature of some biomedical research and embryonic technology.”

Meanwhile, a number of experts, including former Pfizer senior researcher Michael Yeadon, are contesting the need for COVID-19 vaccine, and raising significant concerns about the safety of the fast-tracked products.

US bishops endorse abortion-tainted COVID vaccine: ‘an act of love of our neighbor’