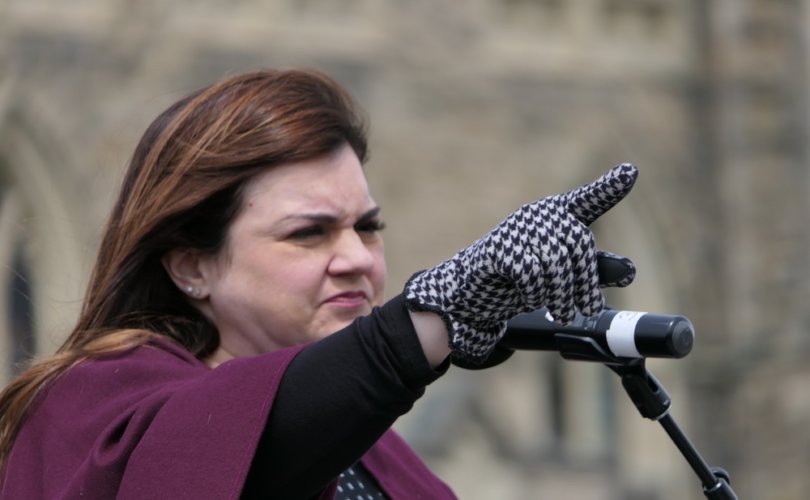 July 25, 2019 (LifeSiteNews) – Pro-life activist Abby Johnson, a Catholic and author of UnPlanned, called out Jesuit priest Fr. James Martin, editor-at-large of America magazine and well-known LGBT advocate, for pushing on social media that women should be giving homilies at Mass.

Johnson and Martin crossed electronic swords over the priest’s July 22 tweet that he found it “stupefying” that women cannot preach at Mass.

Martin, a Vatican communications consultant with a large social media following, suggested that this meant Catholics, congregants and “presiders”, missed out on the “wisdom, experience and inspired reflections” of women at Mass.

It is stupefying to me that women cannot preach at Mass. The faithful during Mass, as well as the presiders, are missing out on the wisdom, experience and inspired reflections of half of its members. St. Mary Magdalene, pray for us.https://t.co/USedUvBxS1

Johnson offered him a reflection of her own, replying to Martin’s tweet: “It is stupefying to me that you are still considered a priest in good standing.”

It is stupefying to me that you are still considered a priest in good standing. ����‍♀️

“I'm disappointed that someone with such a following, and doing such good work for the church, would resort to an ad hominem argument,” Martin responded. “And, yes, I am indeed a priest in good standing.”

Johnson responded by suggesting that the only women Martin wants to preach are those who agree with him.

“Martin: ‘Women should preach!’ Me: *speaks my mind* Martin: ‘Not YOU. I meant women who agree with me’,” she quipped.

Martin later responded to Johnson’s first tweet: “Here is the problem with Catholic Twitter in one tweet,” he wrote, posting Johnson’s tweet. “An article that I tweeted out by a woman who used to preach at Mass, and my supportive comments for her piece, led not to a discussion of the merits of her position, but this, from a public figure with a large following,” he added.

The irony of Martin calling for women preachers and then slamming a woman who essentially preached to him a message he did not like was not missed by others on social media.

The Code of Canon law, which governs the practices of the Catholic Church, states that the ”homily, which is part of the liturgy itself” is “reserved to a priest or deacon.” This practice is in agreement with St. Paul who admonished the Corinthians that “women should remain silent in Churches” (1 Cor. 14:34) – a law which was followed in the Church until various interpretations of the Vatican II Council allowed women to read the Scriptures at Mass but not the Gospel.

As LifeSiteNews’ Claire Chretien reported earlier this week, Martin’s comments come as the Church prepares for a synod on the Pan-Amazonian region, which is widely expected to feature attempts by progressivist prelates to abolish the priestly celibacy that is a hallmark of Roman Catholicism and push the idea of female ‘deaconesses’ despite the Church’s teaching that the diaconate is an ordained office and only men may be ordained. The synod’s working document even went as far as to intimate women’s ordination – which the Church’s perennial teaching states is an ontological impossibility – may be on the table.

Contrary to Catholic moral teaching, Fr. Martin promotes the normalization of homosexuality and transgenderism in the Catholic Church. Those who have spiritual authority over him have done nothing to correct him or call him to account for his erroneous teaching that is leading countless Catholics astray.

Abby Johnson called Fr. Martin to task for “leading people into sin” by promoting lifestyles and choices “not in line with Catholic teaching…not even close.”

“Learn from our faithful priests,” Johnson tweeted to Martin, posting a photograph of Ven. Fulton Sheen and his words:  “America, it is said, is suffering from intolerance. It is not. It is suffering from tolerance: tolerance of right and wrong, truth and error, virtue and evil, Christ and chaos.”

Learn from our faithful priests. pic.twitter.com/GorOdcO58y

When another Twitter-reader suggested that Martin and Johnson both speak for those no-one else will speak for and therefore they would be “better together,” Johnson responded that she does not “partner with heretics.”

She fielded criticism both gentle and stern, asserting that Fr. Martin is “no pro-lifer, just like he is no Catholic” and stating that “it is not harsh to call out scandal.”

When Martin’s defenders stated that the priest is “pro-life and has taken a lot of crap from many of his followers when he tweets on abortion,” Johnson responded: “Attacking the institution of traditional family values IS an attack on life.”

When one Twitter user suggested that Johnson should “stick to your fight on ending abortion instead of this kind of institutional church stuff,” she replied: “My fight against abortion goes hand in hand with my love for the Church. Don’t tell me how to do my job.”

One Twitter user jumped into the conversation, stating: “We stand out as Catholics because we love. Not bully. I know that sounds harsh but the bar is high.”

Johnson responded: “You can love people right to hell,” adding that “You must also speak truth.”

Freelance writer Sean P. Daily, whose work appears at Patheos, decided to hit low. “It’s stupefying to me that a convert who’s had two abortions feels qualified to judge whether a priest is a priest in good standing,” he tweeted.

Johnson, undeterred by criticism, continued to call Martin out for his unfaithfulness in subsequent tweets.

“You bring so much scandal to our beautiful Church,” she said. “You will be held accountable for it.”

Replying to Martin’s numerous defenders, Johnson stated: “You are blinded by clericalism. Look at the things he is promoting. Is it not in line with Catholic teaching…not even close. He is called to do better. We are to hold him accountable for his heretical beliefs that he proudly makes public.”