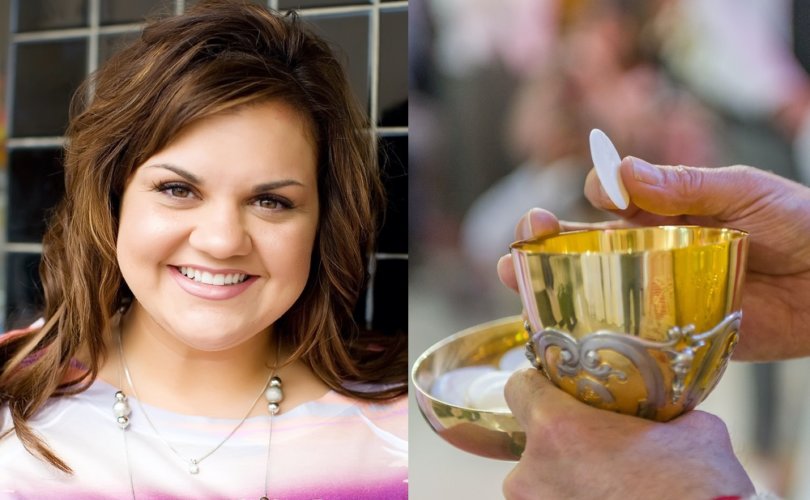 July 24, 2020 (LifeSiteNews) — Well-known pro-life activist Abby Johnson told LifeSite’s John-Henry Westen on his weekly podcast this past Tuesday that she believes there is a “lack of reverence toward the Eucharist” happening in the Catholic Church. That irreverence is causing people to not believe in the true presence of Christ in the Eucharist, she argued.

Johnson, who converted to Catholicism in 2013, made the comments just days after appearing in a video with other pro-life leaders from around the world declaring that out of reverence and love for Our Lord they would only receive Holy Communion kneeling and on the tongue.

The Planned Parenthood director-turned-pro-life advocate informed Westen that even prior to her and her husband’s conversion to Catholicism seven years ago, she was taught about the Real Presence and decided that she would never receive Communion in the hand.

“I remember thinking to myself, ‘why would anybody receive the Lord on their hand?…If you truly believe that is the real presence of Lord, why would you ever have that in your hand? Why would you ever take the chance that that part of the Eucharist could be left behind on your hand to be discarded or, you know, thrown away or wiped away?’ And so I remember in that moment saying I will never receive on the hand. I mean, no, absolutely not,” she said.

A 2019 Pew Research study found that less than one-third of U.S. Catholics believe the Church teaching that during Mass the bread and wine actually become the body and blood of Jesus Christ. Nearly 70 percent say the bread and wine are mere “symbols.”

Many conservative Catholic commentators attribute this loss of belief to extraordinary lay Eucharistic “ministers” and liturgical abuses. Dr. Peter Kwasniewski, renowned scholar and author, made that point in an appearance on Westen’s podcast yesterday.

Johnson said that she believes a casual, sort of indifferent attitude towards the Blessed Sacrament has crept into Catholic liturgy.

“It’s really a sort of a Protestant way of thinking that has seeped into the Mass,” she said.

“I think it's because so many have received on their hand and that reverence has been taken away. It's because we have…lost that we're kneeling when we're receiving the Eucharist.”

Johnson also told Westen that since her conversion to the Catholic faith in 2013 she has experienced many “frustrations” in the Church ranging from remarks by Pope Francis to what she sees as a general church-wide embrace of liberalism.

“As of the past couple years, it's been tough…there have been times that I’ve been troubled by things I'm seeing.”

Three weeks ago on Twitter, Johnson revealed to her followers that she attended the Traditional Latin Mass for the first time. She discussed, in length, her reasons for doing so and what she thought about it on Westen’s podcast. Listen to their full conversation by clicking below.