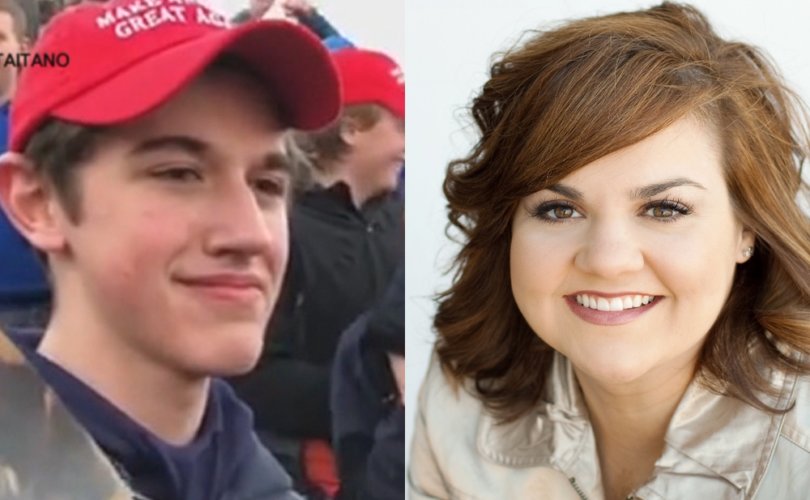 CHARLOTTE, August 17, 2020 (LifeSiteNews) – National pro-life advocates Abby Johnson and Nick Sandmann will address the 2020 Republican National Convention next week to highlight the stakes of the November election for the preborn if former Vice President Joe Biden replaces Donald Trump as president of the United States.

The Trump campaign confirmed the news to Breitbart Monday, explaining that Johnson, Sandmann, and other speakers were selected to “illustrate the potentially disastrous consequences of Democrat governance,” such as the dangers of left-wing “cancel culture.”

Johnson is a former Planned Parenthood abortion facility director who converted to the pro-life cause in 2009, and has since exposed numerous details about the inner workings of the abortion industry. She now leads And Then There Were None, a nonprofit dedicated to helping people leave the abortion industry. Her story was turned into a successful motion picture last year, Unplanned.

Sandmann was a student at Kentucky’s Covington Catholic High School who attended the 2019 March for Life in Washington DC, and found himself at the heart of a national firestorm when the press erupted with claims that a video showed him and his classmates harassing Native American activist Nathan Phillips outside the Lincoln Memorial. But additional extended video and firsthand accounts soon revealed that Phillips was the one who waded into the group waiting for its bus and decided to beat a drum inches from Sandmann’s face, while the boys had merely performed school cheers in hopes of drowning out racist taunts from members of the Black Hebrew Israelites fringe group.

Since the Trump campaign has confirmed, I guess I can, too. ��

I am speaking at the Republican National Convention!! #Trump2020

I can’t tell you all enough about how excited I am to be apart of this years RNC! https://t.co/lur4zw1YS8

Johnson is likely to discuss both President Trump’s pro-life record as opposed to the pro-abortion platform of Vice President Biden, and her own experiences with cancel culture’s reaction to her film. Last year, Unplanned writer and director Chuck Konzelman testified before the Senate Judiciary Committee that the film found its official Twitter account temporarily suspended without explanation, and that even after being restored found its followers removed and other users temporarily unable to follow it.

“No one believes in the First Amendment more than the president, and the president will take action to ensure that Big Tech does not stifle free speech, and that the rights of all Americans to speak, tweet, and post will be protected,” White House Press Secretary Kayleigh McEnany declared in May. “It’s not just bias aimed at President Trump and his employees; it’s also aimed at everyday Americans. It is aimed at the movie Unplanned, as Twitter suspended their accounts and came up with an excuse in the aftermath. Another example is that liberals are allowed to incite violence against the Covington kids, who were in the end proven right; their video was taken out of context. Yet these individuals were let or allowed by Twitter to incite violence.”

The Republican National Convention will take place on August 24 in Charlotte, North Carolina. It is not yet known whether Johnson and Sandmann will deliver their remarks personally at the convention, or via live video due to COVID-19 concerns. President Trump himself will be formally accepting the presidential nomination from the White House.