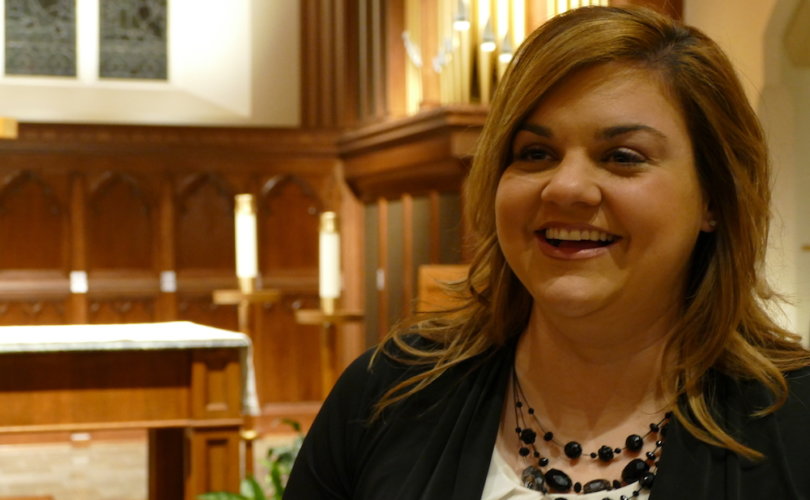 Johnson shared her story of working at Planned Parenthood for eight years and then leaving the abortion industry after assisting with an ultrasound-guided abortion.

Johnson said as she assisted with the ultrasound-guided abortion that was a turning point in her life, she was reciting to herself “this scripted answer that I had given so many times” to mothers undergoing abortions about how the baby wouldn’t feel pain.

“I remember watching…[the] suction tube going into the uterus and I could see it getting closer and closer to the side of this 13-week-old baby and when it touched his side, he jumped.  And he began flailing his arms and legs as if he was trying to move away from that abortion instrument, but there was nowhere to go,” said Johnson.

“The worst part was that when I had the opportunity to intervene, to do something, I just stood there and I did nothing,” Johnson continued.  “I remember wanting to yell out, ‘Stop!  You’re hurting him!’  I remember wanting to sit this woman up and to say ‘Look, look what’s happening to your baby!’  But I didn’t.  I just stood there and I watched.”

During her speech at Georgetown, Richards compared abortion advocates to those in the civil rights movement who faced fire hoses and police dogs.

“For the last century, Planned Parenthood has also been on the front lines of fighting for social justice,” Richards said.

Planned Parenthood committed 323,999 abortions in 2014 and 327,653 abortions in 2013, according to its annual reports.  The group receives hundreds of millions of taxpayer dollars.

Johnson encouraged the students to persevere in prayer.  She cited the prayers that pro-life advocates offered for her for years when she worked at Planned Parenthood.

Johnson encouraged students to treat Planned Parenthood volunteers and workers with kindness and use encounters with them to ultimately show them the truth.

In addition to hosting Johnson, Georgetown Right to Life placed 3,562 flags on campus, each flag representing a child killed by abortion.  The students stayed with the display, called the Cemetery of the Innocents, all day Wednesday and spoke with peers about abortion in America.

H*yas for Choice, the unofficial pro-abortion student group at Georgetown, set up a table in a campus “free speech zone” and distributed free contraception and Planned Parenthood stickers and brochures.  The group also collected “thank-you” letters from students to abortionists.

On Thursday evening, Cardinal Donald Wuerl, the archbishop of Washington, will celebrate a Mass for Life for area university students and alumni.  This Mass is part of “the ongoing effort to strengthen Catholic identity and boldly proclaim testimony to the Gospel message of life,” the Archdiocese of Washington wrote in a news release, and “will serve to put a spotlight on the Church’s teaching, rooted in the Gospel, on the meaning and value of all human life, as well as the important role Catholic institutions play in forming Catholic identity among students and the culture.”