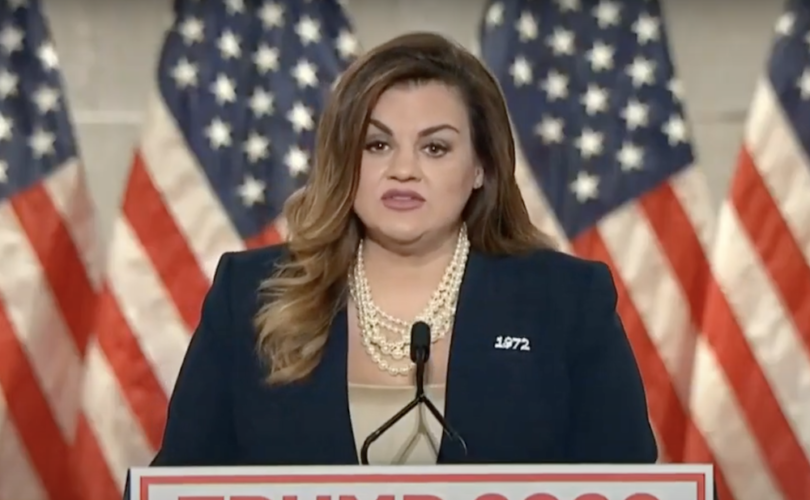 CHARLOTTE, North Carolina, August 25, 2020 (LifeSiteNews) – Abby Johnson took the stage of the Republican National Convention Tuesday evening to present a harrowing snapshot of the reality behind the euphemisms of abortion, and to call on America to stand up to it by supporting President Donald Trump.

Johnson is a former Planned Parenthood abortion facility director who converted to the pro-life cause in 2009, and has since exposed numerous details about the inner workings of the abortion industry. She now leads And Then There Were None, a nonprofit dedicated to helping people leave the abortion industry. Her story was turned into a successful motion picture last year, Unplanned.

Johnson began her remarks by explaining how she was recruited into Planned Parenthood at a job fair. “I truly believed I was helping women,” she said. “But things drastically changed in 2009.”

That year, a trio of incidents opened her eyes: being chosen as employee of the year and attending the organization’s gala, where the Margaret Sanger Award, named for Planned Parenthood’s infamous racist founder, is presented; being ordered to double the abortions performed at her facility because “abortion is how we make our money”; and having to participate in an ultrasound-directed abortion.

“Nothing prepared me for what I saw on the screen: an unborn baby fighting back, desperate to move away from the suction,” Johnson, who herself is post-abortive, said. “And I’ll never forget what the doctor said next: ‘beam me up, Scotty.’ The last thing I saw was a spine twirling around in the mother’s womb before succumbing to the force of the suction.”

“I now support President Trump because he has done more for the unborn than any other president,” she declared, starting with restoring and expanding the Mexico City Policy that bans foreign aid to international abortion organizations.

“That’s something that should compel you to action,” Johnson concluded. “Go door to door, make calls, talk to your neighbors and friends, and vote on November 3.”

Prior to addressing the convention, Johnson said she “felt a lot of pressure to make the most provocative, impassioned, memorable pro-life…speech ever made,” after which listeners would not “ever be able to say, ‘Wow, we had no idea that those things happen during abortion.’ They’re going to know.”

Last year, Unplanned writer and director Chuck Konzelman testified before the Senate Judiciary Committee that the film found its official Twitter account temporarily suspended without explanation, and that even after being restored found its followers removed and other users temporarily unable to follow it.

“No one believes in the First Amendment more than the president, and the president will take action to ensure that Big Tech does not stifle free speech, and that the rights of all Americans to speak, tweet, and post will be protected,” White House Press Secretary Kayleigh McEnany declared in May. “It’s not just bias aimed at President Trump and his employees; it’s also aimed at everyday Americans. It is aimed at the movie Unplanned, as Twitter suspended their accounts and came up with an excuse in the aftermath. Another example is that liberals are allowed to incite violence against the Covington kids, who were in the end proven right; their video was taken out of context. Yet these individuals were let or allowed by Twitter to incite violence.”

The 2020 Republican National Convention began on Monday evening and will run through Thursday evening. The remaining nights of the speech can be watched live through these links, and a full list of speakers can be found here.