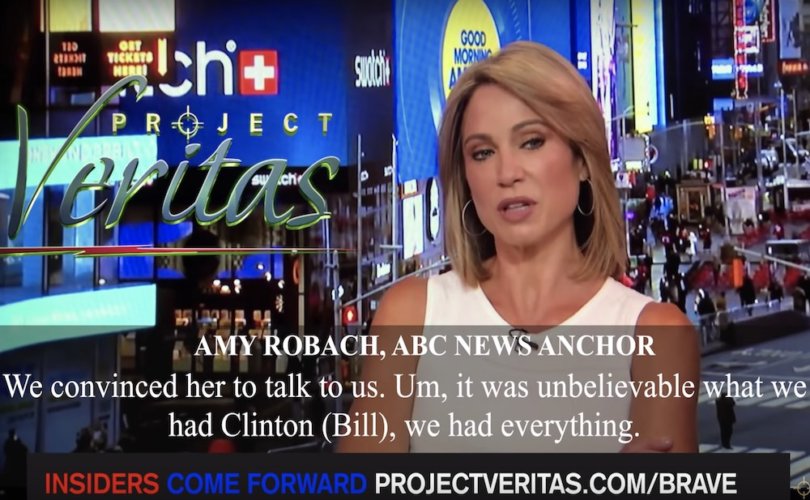 Epstein allegedly killed himself in his cell at New York’s Metropolitan Correctional Center (MCC) in August. The billionaire was being held on charges of trafficking underaged girls to be raped by himself and wealthy associates, in a high-profile case that was believed to implicate many prominent figures around the world.

This week, Project Veritas released a video of Robach confirming that she had an exclusive interview with alleged Epstein victim Virginia Roberts (now Virginia Guiffre) that included an “unbelievable” amount of evidence implicating numerous figures, including former President Bill Clinton and Prince Andrew of the British royal family. Yet ABC refused to air it.

Robach said that the “Palace” pressured the network not to air the story, and said she thinks Epstein did not commit suicide.

“So do I think he [Epstein] was killed?” Robach says on the tape. “A hundred percent, yes I do.”

ABC News officially responded to the bombshell by claiming simply that “at the time, not all of our reporting met our standards to air, but we have never stopped investigating the story,” yet has privately taken steps to identify and punish those who leaked the video.

The network has reportedly identified the individual who accessed the footage of Robach as a former employee who had since moved on to CBS News. ABC relayed their findings to CBS, which in turn fired the individual:

1. Scoop: ABC News execs believe they know who the former employee is who accessed footage of @arobach expressing her frustrations about her shelved Jeffrey Epstein story

That former employee is now at CBS and ABC execs have reached out to CBS News execshttps://t.co/OHEoyahppY

3. It's important to note that ABC News does not know if this former employee leaked the footage to Project Veritas. What they do know is who accessed the footage. It's possible that person could have shared it with others who leaked it. https://t.co/OHEoyahppY

5. Update: Two sources familiar with the matter tell me that CBS News has fired the staffer in question. This comes after ABC informed CBS that they had determined who accessed the footage of Amy Robach expressing her frustrations about the Epstein story. https://t.co/OHEoyahppY

This latest news has further intensified the criticism the mainstream media was already facing for its handling of the Epstein story:

You are witnessing an extraordinary series of events. @CBSNews fires employee ‘who had access’ to tape from RIVAL company, @ABC. Journalism execs collude to PUNISH source/Whistleblower (Irony, much?) for helping bring to light coverup of abuse. Truth to power? Media IS the power!

All three major networks are hushing up coverage of an international pedophile ring involving some of the world's most powerful men.

Remember a big problem with media corruption is what you *don't know.* If they do this in plain sight, what won't they do behind close doors?

Project Veritas president James O’Keefe has previously said the individual who sent the video is still at ABC, indicating a different person than the one who first accessed the footage within ABC’s system.