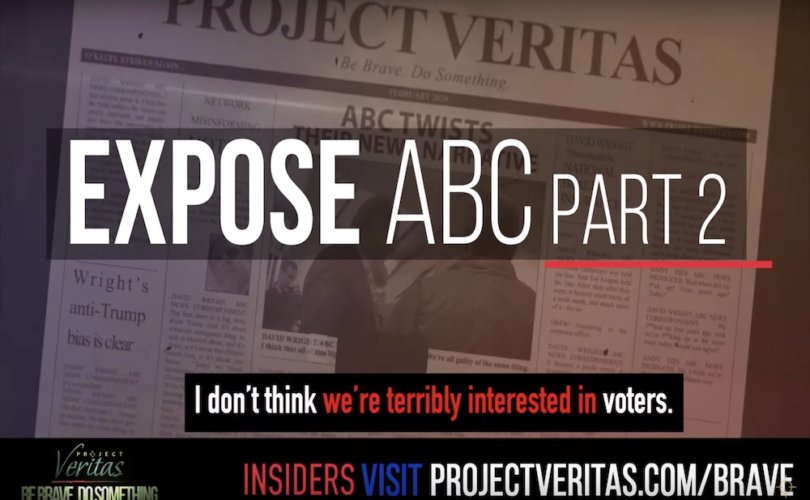 February 28, 2020 (LifeSiteNews) – “The truth suffers” because ABC News puts anti-Trump bias ahead of complete and accurate reporting, according to an ABC journalist caught on video by Project Veritas.

Released Wednesday, the conservative investigative group’s latest undercover report filmed ABC News political correspondent David Wright, who admitted, “I would consider myself a socialist” who believes America has “too many billionaires.” Nevertheless, Wright displays far greater candor about his profession than many who claim to espouse milder forms of liberalism.

“We live in a moment where people live in echo chambers and the truth suffers and, in an effort to compete, we’ve become an echo chamber ourselves,” he said. The mainstream media has “to match the zippy news cycle with responding to the latest tweet and trying to keep pace with the desperate pace of it all.”

Though he thoroughly dislikes President Donald Trump, he acknowledged that the mainstream media tends to be ineffective against him because, rather than focus on issues that personally affect the average viewer’s life, networks like ABC are “easily distracted” by fixating on the White House’s “outrage of the day, the investigation, and of the palace intrigue of who’s backstabbing whom.”

“We don’t hold him (Trump) to account. We also don’t give him credit for what things he does do,” Wright confessed. “I feel terrible about it. I feel that the truth suffers, the voters are poorly informed, and people don’t have the opportunity to tune into whatever they want to here. It’s like there no upside in, or our bosses don’t see an upside in doing the job we’re supposed to do, which is to speak truth to power and hold people to account.”

ABC News producer Andy Fies, who was also part of the conversation, lamented that elites of the sort who run the major networks are out of touch with the perspective of Middle America.

“I mean people in New York are constantly, I think, fascinated by: how can people like Donald Trump?” he said. “How can people understand – you know, well f***! Cross the Hudson now and then, and come out and spend some time, and you’ll hear why! You know? And I still think that we, we still don’t understand voters.”

“So, you know, real people, you know, talk about practical issues, when they’re thinking about a candidate; ‘I want to go back to the workforce,’ or ‘I can’t afford childcare’ or ‘I need medical care for whatever,’” Fies continued. “Those things aren’t TV-friendly. We want to focus on impeachment, we want to focus on the big s*** going on, but the things that help people make up their minds are little s***.”

After the release of Project Veritas’ report, ABC News announced it was suspending Wright for an unspecified period of time, CNN reported.

“Any action that damages our reputation for fairness and impartiality or gives the appearance of compromising it harms ABC News and the individuals involved,” the statement said. ABC added that “to avoid any possible appearance of bias, (Wright) will be reassigned away from political coverage when he returns.”

“We commend David Wright for his honesty,” Project Veritas founder James O’Keefe responded. “No one should be suspended from their job for truth-telling. We encourage Brave Insiders within these media organizations to come forward with any information they have, so that the public knows what is really going on inside these companies.”

This latest video is Part 2 of Project Veritas’ expose of ABC News, which began with last fall’s video revealing the network had spiked a report on deceased pedophile Jeffrey Epstein that, according to anchor Amy Robach, “had everything.”