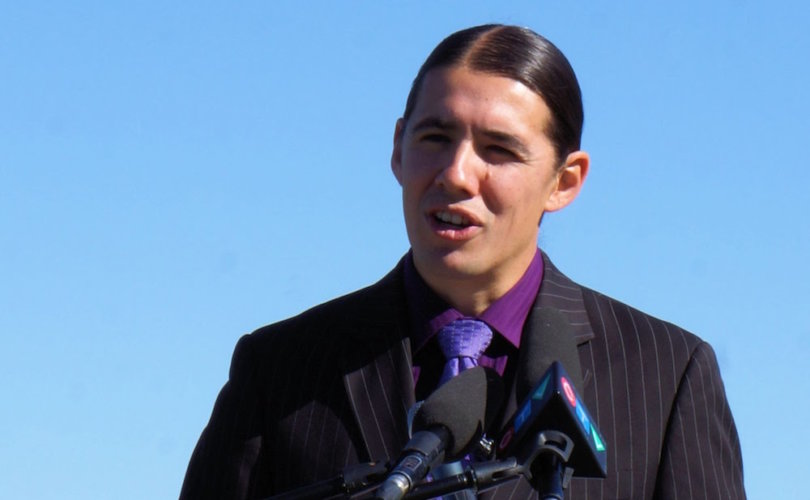 OTTAWA, May 3, 2016 (LifeSiteNews) – Winnipeg MP Robert-Falcon Ouellette, whose father was a full-blooded Cree, linked physician-assisted death with the plague of suicides recently hitting the Attawapiskat First Nation in Northern Ontario in a heartfelt testimony during the House of Commons debate over the government’s euthanasia and assisted suicide bill.

The Commons spent much of Monday debating Bill C-14, sometimes about issues of life and death, and sometimes in partisan dispute about whether the current Liberal government or the previous Conservative one was more responsible for the procedural rush to pass a new law by the Supreme Court of Canada’s deadline in June. At that point the existing Criminal Code classification of euthanasia and assisted suicide as homicide will disappear.

Ouellette, a retired naval petty officer turned college professor, said the bill is “another step” towards “moral relativism,” and an easy way out of the “noble” life of sacrifice and pain required by nature. He spoke of being poised to hang himself as a young boy but “climbing down from the tree and unwinding the rope around my neck” and embracing life with all its hardships.

Ouellette noted that “some people say there is no connection” between the euthanasia advocacy coming from Canada’s urban centers and the wave of suicides plaguing native communities. He said nobody may know if that is true for several generations but First Nations may be hurt if it is not.

Ouellette told the House of Commons that physician-assisted suicide is “seen very differently in Nunavut and Attawapiskat,” than it is in Canada’s metropolitan centers.

His colleagues, he said, had assured him that changes aimed to meet the needs of urbanites would have no impact on native peoples in remote reserves. But in “the indigenous world view, everything is connected. You cannot effect change in one place without changing things in other places.”

Ouellette noted, for example, that the creators of Canada’s Criminal Code would probably be shocked to learn that 23 percent of the Canadians it put in prison were natives.

Ouellette said that suicide was unnatural and was  “virtually unheard of” in native culture before European settlement. The native view was that “Nature itself is hard, to struggle, to strive to see another day, [but] it is a struggle which is noble.” But turning over the struggle to the state through assisted suicide and euthanasia “removes it from nature. Someone else will now be deciding. The bureaucracy will be deciding.”

Ouellette went on to express concern that euthanasia or assisted suicide will eliminate for many the compassion and nobility of the next of kin sitting with their dying relative. “I can say I’m going to hand off to someone else to look after you. Or I can say I will sit and hold your hand in the final moment.”

While Ouellette’s comments came well along in the debates, they paralleled those of Alberta Conservative MP Garnett Genuis, who led off the debate earlier in the day. Genuis complained about the hijacking of language by advocates for assisted suicide and euthanasia, particularly with the use of the phrase “dying with dignity.

Genuis also faulted the Liberal bill for failing to protect the vulnerable. “The written consent provision excludes those who cannot sign. The waiting period can be routinely waived. Mental illness is not excluded. The requirement that death be reasonably foreseeable would exclude no one, and the requirement that two doctors sign off merely encourages doctor shopping…Even if the already ambiguous criteria are not followed, someone who kills an unwilling patient can be let off the hook if he or she claims a reasonable but mistaken belief that the criteria applied.”

Correction: Bill C-14 was not yet referred to the Justice Committee as of Tuesday, but is expected to face a vote Wednesday that would send it there for study if passed.