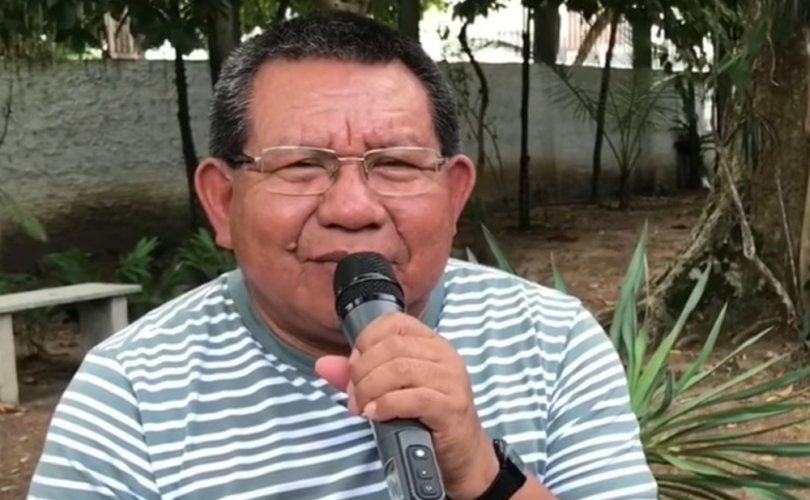 VATICAN CITY, October 18, 2019 (LifeSiteNews) ― Brazil’s first indigenous priest has proven that the peoples of the Amazon are capable of understanding celibacy.

Fr. Justino Sarmento Rezende, SDB, gave a presentation about his vocation and work among other indigenous communities in the Amazon region in the press conference following yesterday’s meeting among members of the Pan-Amazonian Synod.

Responding to a question regarding Bishop Erwin Kräutler’s statement that indigenous people are incapable of understanding celibacy, the celibate Fr. Sarmento stated that anyone can live it out.

“Celibacy is a virtue that can be lived by any human being, man or woman,” he said.

The missionary priest explained that celibacy is not born with the human person, but was established in history. People can choose and live it freely. Naturally, it can be difficult to live a celibate life, but it can be supported with prayers and the help of the community.

Sarmento disclosed that when he entered the seminary, his mother cried and his grandfather told him that Catholic priesthood was not for his people.

“I speak from my own experience: my mom never told me, ‘Go be a priest, so you can be celibate,’” Sarmento recalled.

“On the contrary, when I entered seminary she cried because she wanted to see her son married so she would have the joy of raising grandchildren,” he continued.

“My grandfather, who was a great master of Tuyuka ceremonies and practices said: ‘Being a priest is not for us, Tuyukas [the Western term for the Utapinõmakãphõná people]! Where did you get that idea from?”

Sarmento said that he even he thought at that time that only “whites” were capable of being priests. He stated that as soon as indigenous priests were ordained, people made comments suggesting that “indigenous men struggle to live celibately.”

“Yeah, I do, but that’s because I am a normal person,” he joked.

“Maybe some others don’t, I don’t know. What matters is that we live it [the celibate life] through effort, through prayer, with help from others, in the most harmonious way possible.”

The indigenous priest said that he would leave the priesthood if he suffered excessively from the celibate life, “to the point where [his] life cannot be a witness to the people in the Church.”

Sarmento made the assembly chuckle when he suggested that some women might not be able to live celibately, possibly alluding to the controversy around the current discussion of women’s leadership in the Church.

“Celibacy is a virtue that can be lived out by any human being, man or woman — well, I don’t know about the ‘woman’ part…” he added.

“Everything has been confusing lately! That is a whole other topic here…”

Sarmento, who belongs to the Salesian Order, was ordained a priest in 1994 in the Salesian mission of Pari Cachoeira in northwest Brazil.

The idea that the indigenous people of the Amazonian region cannot grasp the concept of priestly celibacy has been used to promote the ordination of trustworthy married men, called viri probati, to the priesthood. Bishop Erwin Kräutler, the Bishop Emeritus of Xingu in Brazil and member of the Synod of Bishops for the Pan Amazonian region being held in Rome, said that there was “no other option” than to ordain married indigenous men as priests “because they don’t understand celibacy.”

The Austrian-born Brazilian bishop’s October 9 remark was denounced by some people of both indigenous and European descent as racist.

“I find it very offensive as an indigenous person,” Rexchrisanto Delson, who has Filipino Igorot ancestry, told LifeSiteNews.

“I even find it very racist. These people who believe such things seem to have forgotten the role of missionaries as understood in the past when the primary purpose and goal was to convert and baptize people – to save their souls.”

Fortunately, not all members of the synod believe that celibacy is the greatest bar to priestly vocations in the Amazon region. On October 16, Bishop Wellington de Queiroz Vieira of Cristalândia, Brazil identified “lack of holiness” among priests as the greatest obstacle, followed by the lack of a missionary spirit.

There are concerns, however, that Fr. Sarmento favors the “ordination” of women and other novelties because of his contributions to a statement produced this April by a group of Latin American liberation theologians who participated in a pre-synodal conference in Bogota.

“Towards the Pan-Amazonian Synod: Challenges and Contributions from Latin America and the Caribbean” undermines fundamental elements of Catholic doctrine by claiming that there is no one true religion and that non-Christian religions are capable of bringing “salvation.” The document praises the pagan religious traditions of the indigenous people in the Amazon.

In addition, the Bogota statement also redefines the Eucharist as a symbolic act of the community, attacks the hierarchical priesthood of the New Testament, and asks the Church’s authorities to be open to the possibility of the “ordination” of women as priests. It calls for “the overcoming of a patriarchal perspective” and  advocates the substitution of a “feminist and ecological theology.” It also urges the ordination of married men to the priesthood.

The document closes with a prayer to God as “Father and Mother of life,” after having referred to God as the “Creator-Creatora.”