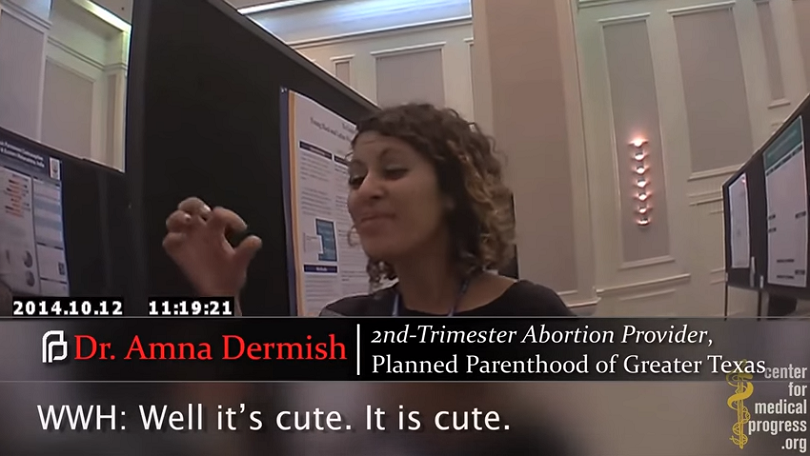 AUSTIN, TX, October 27, 2015 (LifeSiteNews) – Abortion workers sometimes like to look at the dissected body parts of the babies they have aborted, because their organs are “cute,” an abortionist admits in a new video released by the Center for Medical Progress.

“One of our POC [point of care] persons is really into organ development,” Dr. Amna Dermish , an abortionist with Planned Parenthood of Greater Texas' Austin location, says in an undercover video released this morning. “She'll pull out, like, kidneys and heart. The heart we frequently see at nine weeks. She always looks for it.”

“Just like for fun?” the buyer, who introduces himself as “Robert Sarkis,” asks.

“Well, it's cute,” another abortion worker, from Whole Women's Health in Texas, replies.

“I have so much respect for [fetal] development,” Dermish says. “It's just so incredible.”

CMP's lead investigator, David Daleiden, has said the abortionists he encountered during his 30-month-long undercover investigation were more honest about the life of the unborn than abortion industry lobbyists.

In recently leaked undercover footage of the 38th annual meeting of the National Abortion Federation (NAF) held in San Francisco early last April, an abortionist says that “ignoring the fetus is a luxury of activists and advocates.”

“If you're a provider, you can't ignore the fetus, right, because the fetus is your marker of how well – how good a job you did.”

She admits abortion causes “violence,” and says the unborn baby is “a person.”

But the abortionist says that “killing” is “the most important thing I could do with my life.”

Much of the footage in today's CMP video debuted on October 5 during an interview Daleiden gave on The Blaze TV with Live Action founder Lila Rose. Live Action has announced it will soon release a new undercover series of videos “to expose the true nature of abortion and give viewers an encounter with the humanity of the preborn child.”

In the video Dermish says that removing an aborted baby's skull and brain intact will “give me something to strive for.” She regrets that she has not yet mastered the technique.

She said that she does not use digoxin to kill the child by lethal injection. But she sometimes converts the child to an inverted, breech (feet-first) presentation.

“I don't usually do it with the 16 to 18 weeks, because I don't really need to,” she said. “With the further gestation, I will sometimes do that if it's a cephalic [standard, head-first] presentation just because it's easier to get” the requested organs.

Dr. Deborah Nucatola, the senior director of medical services at Planned Parenthood, admitted to performing a procedure that sounds like partial birth abortion in CMP's first video, released July 14. Investigators filmed Dr. Nucatola sipping wine and munching salad as she described less “crunchy” forms of abortion that allow her to “try to get it [the baby] all intact.”

When “Sarkis” mentions “Deb,” who oversees medical procedures at all Planned Parenthood facilities, Dermish smiles. “I trained with her,” Dermish says.

At one point, the video shows the two in side-by-side footage making the same hand motions as they describe their abortion technique.

Planned Parenthood has yet to respond to describe how this procedure differs from the prohibited partial birth abortion procedure. However, officials have been quick to try to undo the public relations damage caused by CMP.

“Actually, the people in those videos are amazing and compassionate and wonderful doctors and staff of Planned Parenthood,” Dawn Laguens, Planned Parenthood's executive vice president, said in a televised interview excerpted in the new video.

Texas state officials have investigated the Austin facility – and all state abortion facilities – on the basis of CMP's videos.

“Earlier this year, you committed and condoned numerous acts of misconduct captured on video that reveal repeated program violations and breach the minimum standards of care required of a Medicaid enrollee,” Stuart Bowen Jr., the Inspector General in the state's Health and Human Services Commission, wrote in a letter to Planned Parenthood last Monday.

The letter informed the local affiliate that Texas would kick Planned Parenthood out of the state's Medicaid program.

Last Thursday, Texas inspectors raided Planned Parenthood facilities across the state as part of an unspecified investigation, which those close to it say is to investigate fraud, as well as the revelations in the recent videos.

“Less than 4 miles away from the Texas state capitol, Planned Parenthood routinely practices barbaric partial-birth abortions on living, late-term fetuses,” Daleiden said this morning. “Planned Parenthood’s crimes are not just the result of local bad actors, but are tolerated and even encouraged at the highest levels of the national organization. State-level criminal investigations must press charges, and Congress’ new select committee must pursue a deep and comprehensive accounting of Planned Parenthood’s atrocities against humanity.”