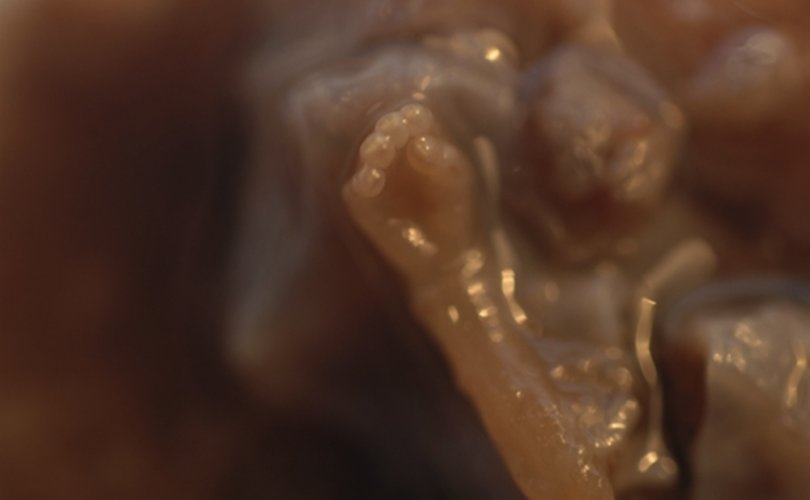 Killed by an abortionist at a gestational age of only seven weeks, Michael-Gabrielle will finally get a proper burial in Michigan on Saturday, November 24 in the Holy Spirit parish cemetery.

BRIGHTON, Michigan, November 7, 2018 (LifeSiteNews) — A small, handmade coffin is going to be the final resting place of aborted baby Michael-Gabrielle.

That tiny coffin will be lowered into a grave after a funeral Mass later this month at Holy Spirit Catholic Church in Brighton, Michigan.

She — or he — is the last of 15 babies whose bodies were discovered stashed in the trunk of Michigan abortionist Michael Roth's car by West Bloomfield police officers three years ago to be buried.

In a photograph on the Citizens for a Pro-Life Society website, the tiny fingers of the unborn baby, slaughtered at the gestational age of only seven weeks, are clearly visible.

The other 14 children's bodies found in the abortionist's car were laid to rest Saturday at Holy Sepulchre Cemetery after a funeral Mass conducted by Archdiocese of Detroit Auxiliary Bishop Robert Fisher at the Church of the Transfiguration.

“The culture of death treats these children like trash. The church will do the complete opposite,” said Citizens for a Pro-Life Society director Monica Migliorino Miller in an interview. “We will treat them with respect. They are children of God and they belong to God.”

Michael-Gabrielle, who has both a boy and girl's name because the baby's sex could not be determined at the gestational age when the abortionist killed him or her, is to be laid to rest on November 24 in a grave that has been donated in the Holy Spirit parish cemetery.

The baby's tiny casket was lovingly made by Miller's husband, Edmund Miller.

According to Monica Miller, the funeral and proper burial of these babies is important because it sends a strong message that they are loved by God's church.

“It means that the church has embraced them,” said Miller. “God's people accept that these are His children. They have been adopted by His followers.”

In September 2015, Roth was driving in West Bloomfield when he struck and seriously injured a pedestrian. Police impounded his car.

By then, Roth had already lost his lease on a building where he ran an abortion clinic for more than two decades. Although he tried to rent other space to restart his abortion practice, a pro-life activist discovered those locations and convinced the landlords to not rent to him.

After the police impounded the abortionist's car, he asked to retrieve garage door remote control devices from inside it. The police obliged. But when they opened the car, they also found he was illegally in possession of medications and containers with the body parts of aborted babies.

The attorney general's news release referred to these aborted babies by the euphemism of “post-conception material.”

“Police found evidence of six prescriptions for Ciprofloxacin, a common antibiotic used with abortion procedures, which was allegedly written by Dr. Angel Ojeda, a doctor who runs the Eastland Women’s Center in Eastpointe, Michigan,” reads a news release issued by Michigan's attorney general in 2016. “The clinic’s primary focus is terminating pregnancies. Officers also found vials of Fentanyl, a drug commonly used as a sedative during termination procedures, as well as containers of post-conception material.”

Dr. Ojeda, whose clinic reported that medications went missing during that time, also stated during the investigation he never employed or made out prescriptions for Roth.

Then 74 years old, Roth was charged with possession with intent to deliver two narcotics, Fentanyl, six counts of identity theft and three counts of larceny in a building. He was eventually fined $600. Operation Rescue, a group that monitors the abortion industry, called the judgment against Roth “a slap on the wrist.”

Although they were dismissed as only so much “post-conception material” in the official news releases, the jars in the abortionist's car were clearly human remains.

“I looked in the jars,” said Miller. “I saw the tiny bodies myself — their arms, legs, feet, spinal columns — all there.

“These are real human beings. They lived once. They were put to death, treated with total disrespect, and now these unwanted people will at least be given a humane and dignified burial,” she said.

In the Christian faith, burying the dead is one of the seven corporal works of mercy, and one especially highlighted in the Book of Tobit.

“There is something very powerful about the Catholic tradition of offering Masses for the eternal repose of souls,” wrote Dr. Robert Stackpole, director of the John Paul II Institute of Divine Mercy in Stockbridge Massachusetts, on a website describing corporal works of mercy.

In Michigan, Miller is hoping the burial of these aborted children will also serve to remind people of the tragedy that is abortion.

“Having an actual grave instead of just a plaque or symbolic monument … could help to focus attention on the injustice of abortion,” she said.

Gravesites of babies who died at the hands of abortionists can have a powerful impact.

In her book Abandoned: The Untold Stories of the Abortion Wars, Miller recounts an incident in which a woman who had had an abortion visited one of these gravesites and left on it a stuffed toy animal, a rabbit, with a note attached to its paw.

“It was a note from a woman to her dead baby saying how she was so sorry and pleading to her baby to forgive her,” recalled Miller. “It's very important for (women who have had abortions) to have closure for the babies they've had aborted.”

Abortionist who committed 3 felonies gets away with $600 fine