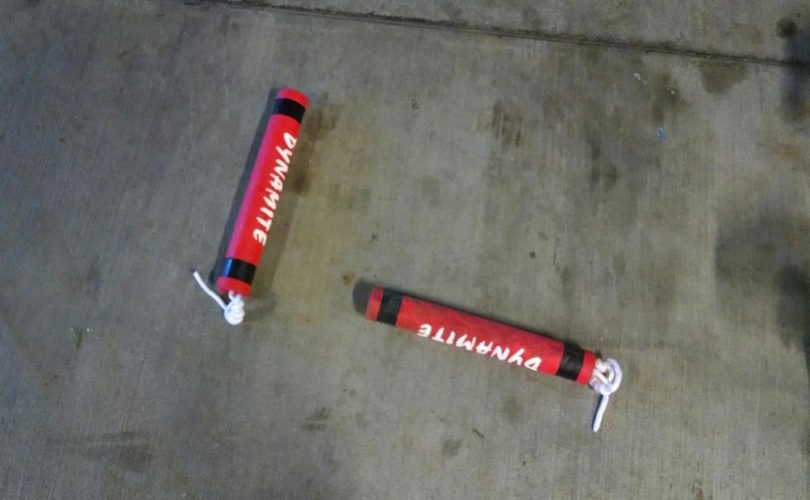 PEORIA, Illinois, April 4, 2016 (LifeSiteNews) — A female staffer for the National Abortion Federation attempted to smuggle three sticks labeled “dynamite,” an aerosol can, a liquid-filled mason jar – the makings of a homemade bomb – onto a plane at Peoria International.

The FBI and bomb squad rushed to the airport where a Transportation Security Administration agent spotted ingredients for an explosive in the National Abortion Federation staffer's luggage.  In all, the airport was evacuated for three hours, causing numerous flight delays.

Despite shutting down the entire airport by trying to take on a plane what looked like a bomb –including contraband liquid, the National Abortion Federation security staffer was simply released without being charged with anything.

“This bomb scare in Peoria shows how being involved in the abortion industry distorts your moral sense,” Pro-Life Action League Executive Director Eric J. Scheidler told LifeSiteNews.  “How do you bring a phony bomb with you to the airport?”

“Such a scenario looks all the more ridiculous when you consider how manifestly peaceful the pro-life movement actually is,” the prolife champion explained. “Abortion providers play up this notion of violence, but the reality is that pro-life Americans collectively spend thousands of volunteer hours every week throughout the year in entirely peaceful, compassionate outreach at abortion facilities.”

Sheriff’s Office Chief Deputy Joe Needham said that the woman told police she had flown with the items before.

The incident occurred a week after a Columbus, Georgia, abortion facility reported a “suspicious package” to the bomb squad, which turned out to be makeup.