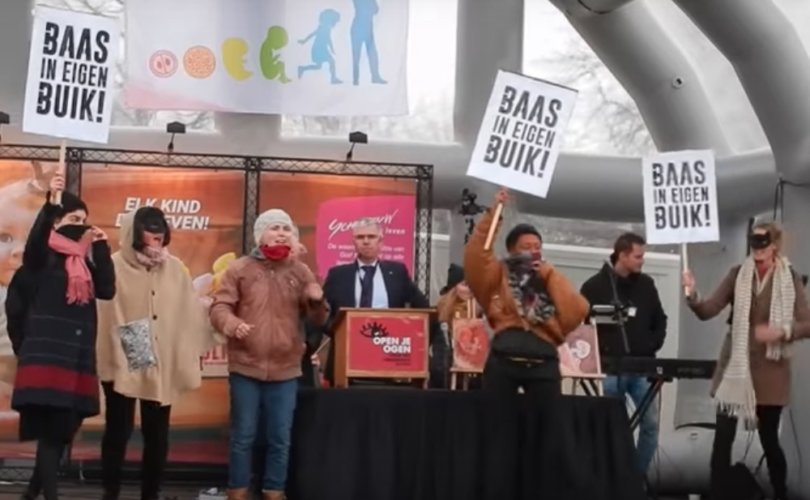 THE HAGUE, Netherlands, December 12, 2018 (LifeSiteNews) – Saturday, December 8 saw the Netherlands’ own March for Life, which had a large turnout of committed pro-lifers but also a handful of pro-abortion party crashers.

Started by the pro-life group Cry for Life in 1985, the Dutch march protests the country’s legalization of abortion in 1980 and seeks to “create awareness for the value of each human life and to pray to God for a change of heart of those who are silent or support abortion,” according to the European pro-life group One of Us.

This year, the event took place at the Hague’s Malieveld field, a popular location for a wide range of events and demonstrations. Last year’s march attracted 14,000 people, and Dutch news outlet Staphorst.Nieuws reports that this year saw more than 10,000 attendees.

The event featured a variety of speakers as well as prayer, music, and singing. Hundreds of civil, enthusiastic participants can be seen in various photos of the event: ​

@oneofuseu in the March for Life in The Hague pic.twitter.com/P9BUjZe6yE

As Cry for Life leader Kees van Helden was opening the event, six women stepped on the stage, some of whom wore masks. They attempted to shout down the event with chants and signs both declaring “Baas in eigen buik,” which translates roughly to “masters of our own belly.” They were quickly removed from the stage, but continued shouting as they walked away.

At least some of the protesters were from the area “feminist” group Kattenkwaad, and the slogan was also found defacing a church column along the march route. Two arrests have been made so far.

Kattenkwaad claims to fight against “discriminatory or oppressive behaviour and consider the revealing and rejection of social inequality the first necessary step to achieve change.” The group took credit for interrupting the march on their website, adding that the arrested protesters have been released, declaring that “intolerance to individual freedom of choice should not be allowed to grow!”

One of the messages Kattenkwaad didn’t want “allowed to grow” was a speech by Joanne, a woman who shared her experience with abortion.

“I was not allowed to hear the heartbeat,” she recalled. “Although I asked for a photo, I never received it […] I had a conversation with the abortionist where I indicated that I did not really want it. Nothing was done with this.”

“During the wait, I thought several times: I'm leaving,” she continued. “But the pressure of darkness kept me on that bed.”

“With God, I could come with my intense pain, regret and sadness. With God, I found comfort, forgiveness and healing,” she explained. “This gave us deep and unprecedented peace and confidence for the future.”