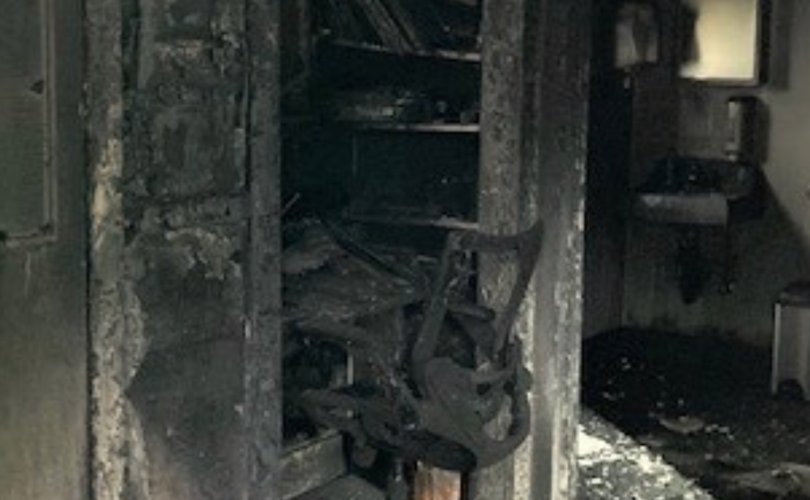 GRECHAM, Oregon (LifeSiteNews) – Abortion activists have set fire to yet another pregnancy center.

In the early morning of June 11, the Gresham Pregnancy Resource Center was set ablaze by radical pro-abortion activists, according to officials from the pregnancy center.

“It was mostly contained to one room, but damage there was extensive and there is additional water and smoke damage in other parts of the building. Nobody was hurt,” he continued.

Cirillo condemned the violence, saying, “This moment in our culture is volatile, and the spill over into violence is deeply destructive to the fabric of our communities.”

“We reject and refuse to have any part in the culture of hate. Jesus has modeled a different way. It’s the way of love,” he added. “That narrow way includes, as a challenge to us all, the love of those who hate us.”

While these attackers left no message behind to reveal their identities, an earlier attack on a Seattle office was claimed by  the abortion activist group Jane’s Revenge.

Jane’s Revenge may be a reference to the 1970s-era group called “Jane’s Collective,” whose members were arrested for illegally providing abortions. Their charges were dismissed after Roe v. Wade was decided by the U.S. Supreme Court in 1973.

The incident is the latest in a rash of attacks on churches and pregnancy centers, including the vandalizing of four churches early Sunday morning in Olympia, Washington.

Pro-life advocate Lila Rose called out the Biden administration for their lack of action against the vandals, saying, “This weekend, pro-abortion activists firebombed a pregnancy center in Gresham, OR, which provided material help for mothers & children.”

“Imagine if this had been an abortion clinic,” she added. “It would be headlines news. But because it’s a pro-life center, media & the Biden admin ignore.”

This weekend, pro-abortion activists firebombed a pregnancy center in Gresham, OR, which provided material help for mothers & children.

Imagine if this had been an abortion clinic. It would be headlines news. But because it’s a pro-life center, media & the Biden admin ignore. pic.twitter.com/qfBbtitV2G

Last week, US Homeland Security warned of potential terrorist violence over the pending Roe v. Wade decision, claiming that pro-life supporters as well as pro-abortion activists have been encouraging violence, despite no evidence of violence or threat of violence committed by the pro-life side.