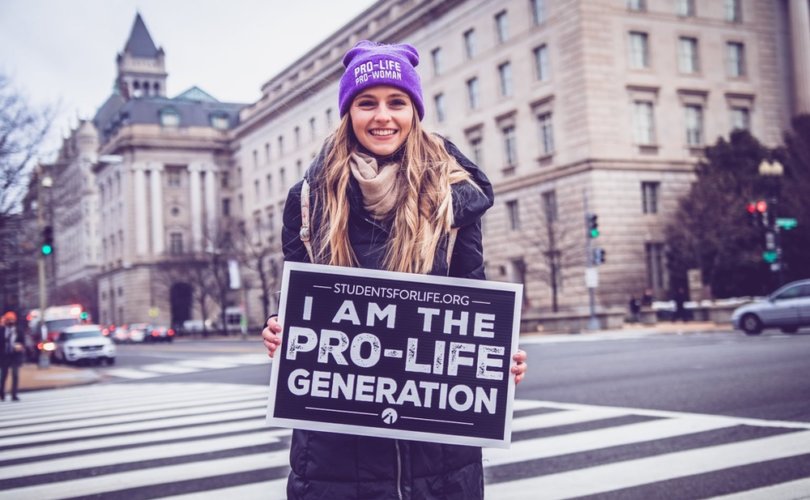 “The violence and vandalism against pro-lifers must stop,” said Kristan Hawkins, President of Students for Life of America (SFLA). “In the past several weeks, we have been targeted by violent pro-choice individuals who hate the idea that pro-life people even exist.”

She said SFLA is asking the Waukegan, Illinois police department to hold the pro-abortion attackers “accountable for their actions.”

“We won’t give up our free speech rights,” she added.

While peacefully protesting, two groups of abortion supporters egged pro-lifers, including members of Crusaders for Life, a pro-life youth ministry group that is part of St. John Cantius in Chicago and St. Peter Church in Volo, Illinois. The students, many of whom are young, were hit while kneeling in peaceful prayer.

Members of College of Lake County Students for Life and Young Americans for Freedom were egged twice by different groups. One of the Students for Life and YAF leaders, Shawna Weber, was hit twice with eggs by pro-abortion attackers screaming “Pro-choice!” She fell during the second attack. The group gathered photo evidence and filed a police report.

“The actions of these counter-protesters were unacceptable. It isn’t popular to be pro-life, and I speak my views on the subject of abortion knowing that there is a good chance I will be verbally and possibly physically attacked for doing so,” said Weber. “This just further encourages myself and others to see that there is work to do in promoting respectful and productive public discourse on important topics such as abortion. I will not slow down my activism and support for the rights of unborn humans.”

Sarah Minnich, the Illinois/Iowa Regional Coordinator for Students for Life, who was on site during the protest, stated: “This violence against pro-life activists who take a stand for innocent human life is unfortunately not uncommon. Most striking, however, is the perseverance and joy of the students involved. Pro-life students are told not to return the anger and violence of pro-abortion activists [who] react to the pro-life message. These student leaders embody the beauty of life by praying for the perpetrators and continuing to stand up for life.”

An investigation is ongoing, but a trend of violent and ugly attacks against peaceful pro-life speech is escalating. Recently, Chicago Pro-Life Future, the young adult groups of Students for Life, faced vandalism while peacefully protesting abortion.

SFLA keeps a map of vandalisms against pro-life groups here.