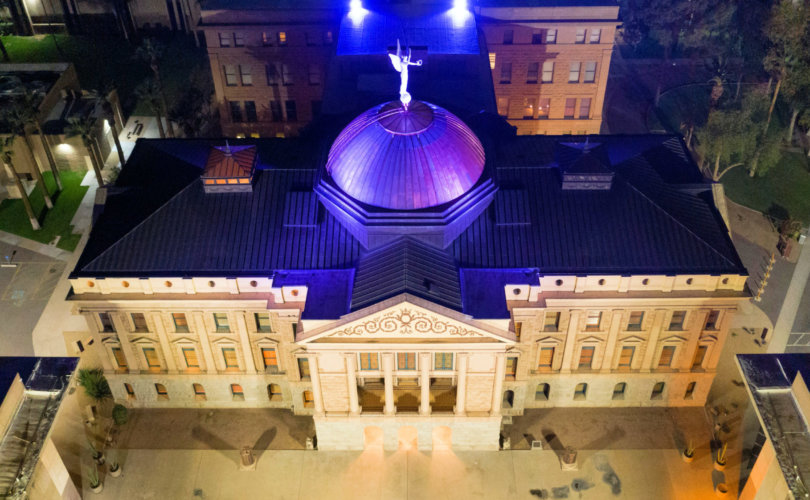 PHOENIX, Arizona (LifeSiteNews) — Pro-abortion activists tried to break into the Arizona Capitol building on Friday night as part of nationwide protests against the Supreme Court’s decision to strike down Roe v. Wade Friday.  The unruly protest Friday night forced the Arizona Senate to go into recess due to the threats. On Saturday night, the protests continued with some demonstrators tearing down security fencing.

WATCH: Chaotic scenes during pro-choice rally at the Arizona Capitol, forcing the Senate to go into recess pic.twitter.com/9xk257UsJF

A mob of abortion activists can be heard pounding on the doors of the Arizona Capitol and yelling “My body, my choice.”

Here is more video showing the mob of pro-abortion rioters trying to break inside the Arizona state capitol while it was in session on Friday night. DPS had to quickly mobilize to secure the building before the rioters could smash the glass. No one was arrested. https://t.co/gFnzRlZKCL pic.twitter.com/0XSVVqSrKu

The protests “forc[ed] lawmakers to huddle briefly in a basement inside the building as they rushed to complete their 2022 session,” ABC News reported.

“SWAT team members with the Department of Public Safety fired tear gas from second floor of the old Capitol building to disperse protesters in the mall between the current House and Senate buildings,” ABC reported. “KPHO-TV reported the officers opened fire when several protesters started banging on glass doors of the Senate building.”

The protests continued into Saturday.

“Four people were arrested late Saturday after protesters attending an abortion-rights rally pulled down a temporary fence around the perimeter of the Arizona Capitol,” the Arizona Republic reported. “Several others were handcuffed and detained by state troopers, including people who said they were attending the event as legal observers.”

“Numerous agitators forcefully tore down and damaged the fence that was set up around the House and Senate Plaza,” Bart Graves, a Department of Public Safety spokesperson, told the Republic. “Throughout the day, troopers had given numerous warnings not to touch the fence. Earlier in the day, lawful protesters kept agitators from tearing down and damaging the fence.”

The violent protests are just the latest in a series of reactions to the actual reversal of Roe v. Wade on Friday; the protests in anticipation of the reversal that have occurred for the past two months—ever since a leaked version of the decision came out on May 2.

The violence includes at least 20 attacks on pro-life pregnancy resource centers since early May, with a group called Jane’s Revenge claiming responsibility for many of the violent acts.

The radical abortion group has declared it is responsible for the firebombing of pregnancy centers that provide free services to families. It has also declared “open season” on pro-life groups.

Congressional Republicans sent a letter to the Department of Justice asking for Jane’s Revenge to be labeled a domestic terrorist group.