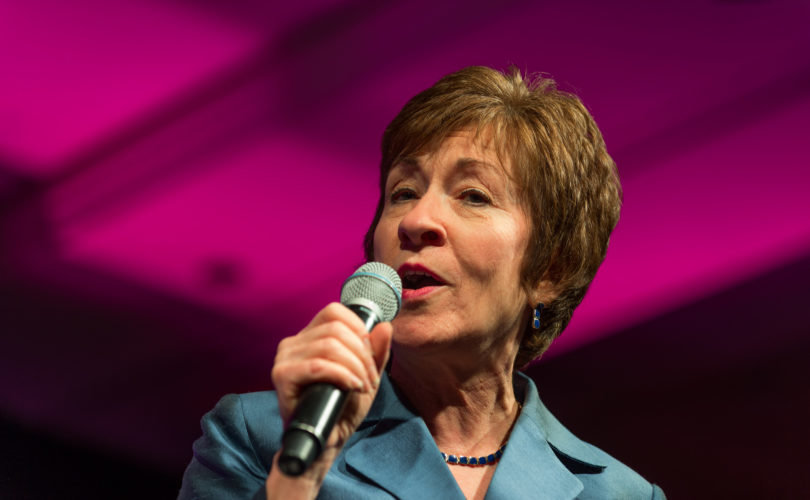 President Trump’s choice to replace the retiring Justice Anthony Kennedy appeared before the Senate Judiciary Committee last week to answer a variety of questions about his judicial views and record. During the hearings, he expressed significant respect for Roe v. Wade’s status as precedent under the doctrine of stare decisis, as well as mixed signals on the judiciary’s ability to declare rights not explicitly listed in the Constitution.

While a few observers have taken his answers to mean that “Roe and Casey are going nowhere,” Kavanaugh’s pro-life supporters and pro-abortion foes both argue his non-committal answers were phrased to navigate a narrowly-divided Senate, and that he ultimately would vote to overturn Roe.

Most senators’ votes for or against Kavanaugh are foregone conclusions, but the Senate’s two openly pro-abortion Republicans, Collins of Maine and Lisa Murkowski of Alaska, could potentially sink his nomination. Both have declined to reveal how they plan to vote.

In hopes of pressuring Collins to vote “no,” pro-abortion activists have sent her an estimated 3,000 coat hanger since July, TIME reports. Wire coat hangers are a prominent pro-abortion symbol, supposedly denoting deadly back-alley abortions that occurred during the years before Roe.

Additionally, to the extent that there was any decline in abortion-related maternal deaths, a 2005 analysis by FactCheck.org concluded that the “best available evidence” showed it began before states began legalizing abortion, and was largely due to the invention of new drugs.

Nevertheless, Sen. Dianne Feinstein, D-CA, falsely claimed during her questioning Wednesday that “in the 1950s and ’60s, the two decades before Roe, death from illegal abortions in this country ran between 200,000 to 1.2 million.” Her office claimed that a Guttmacher Institute statistic was merely misprinted in her prepared questions, but Feinstein repeated it on Friday before correcting herself.

Collins says that the coat hangers, which follow scores of TV, print, and online commentary and advertising targeting her, have not altered her thinking.

She and Murkowski have voted for all of Trump’s judicial nominees so far, but it remains to be seen whether the unprecedented (albeit uncertain) prospect of an anti-Roe majority could change their calculus. On the flip side, Republicans speculate that they could pressure red-state Democrats Joe Manchin, Joe Donnelly, or Heidi Heitkamp to defect.