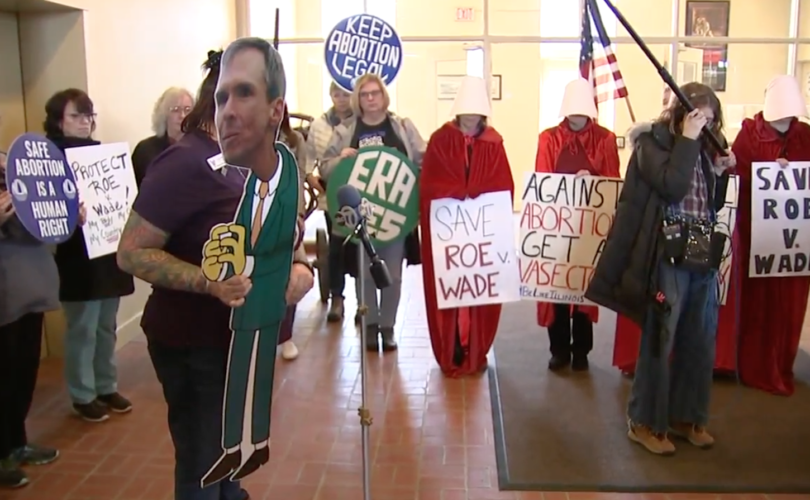 January 8, 2020 (LifeSiteNews) – One of last remaining pro-life Democrats in the U.S. House of Representatives is under fire for joining more than 200 Republican members of Congress in a Supreme Court amicus brief in support of a Louisiana pro-life law that may lead the court to reconsider its 1973 Roe v. Wade decision.

More than two dozen abortion activists rallied outside U.S. Rep. Daniel Lipinski’s Lockport, Illinois office and then stormed inside where they staged a sit-in, hoping to confront the congressman.

Pro-abortion Democrats are outraged by the eight-term Representative of Illinois’ Third District for his participation in the court brief and want to see him lose his March 17 primary race where he faces two pro-abortion contenders.

“Over the years, the courts have gotten more and more conservative,” Laura Welch, president of Illinois National Organization for Women, told WGN9. “The government is trying to tell women what we can and can’t do with our bodies.”

“And so a supposed Democrat, Dan Lipinski – we call him a Democrat in name only – has just signed on to a case that is going to the Supreme Court of the United States that potentially has the ability to overturn Roe v Wade,” said Welch.

One of the protesters, Jas West of Friends Who March, told the Chicago Tribune, “If they don’t support choice, we aren’t voting for them.”

“This case could decide the future of abortion access in this country, and we will not sit silently, stand by and let Congressman Lipinski pledge his support for taking away women’s rights,” said Annie Williams, co-leader of the Illinois Handmaids.

“Lipinski is trying to violate our rights to healthcare,” said Holli Fingerle, a fellow for Indivisible South Suburban Chicago. “Not just our rights, but the entire country’s rights.”

“That’s why I’m here,” continued Fingerle, “and for that he needs to be voted out of office.”

“Dan Lipinski doesn’t represent the people of Illinois’ Third District,” claimed Megan McCullough, a grassroots organizer for Planned Parenthood Illinois Action. “We want a candidate, like Marie Newman, who stands up and fights for women’s rights.”

Newman is one of the Democratic candidates who hopes to unseat Lipinski on March 17.  In 2018, she lost to the incumbent by just 2 percent.

“Dan has told us for years that he is aggressively working to overturn Roe v. Wade so I think he fulfilled his promise. He continues to vote against the district,” Newman told WGN9.

The other Democratic hopeful, Rush Darwish, thinks Lipinski “doesn’t get it.”

“We’re now in 2020; he calls himself a Democrat,” Darish told WGN9. “But yet the core values of what you should believe as a Democrat is that a woman should have a choice.”

Progressives around the country want to unseat Lipinski

Since it became known late last week that Rep. Lipinski was one of the pro-life brief signatories, Democrats from around the country have redoubled their efforts to unseat the pro-life politician, with 2,500 grassroots activists pouring $50,000 into competitor Marie Newman’s war chest.

According to Politico, Progressive activists “are livid and have helped pump up Newman’s campaign as a result.”

“Planned Parenthood’s political arm, NARAL and Emily’s List have all donated to Newman’s campaign, which according to federal filings, raised about $900,000 by the end of the third quarter,” continued the Politico report. “Even left-wing darling Alexandria Ocasio-Cortez has pitched in to Newman’s campaign.”

Chicago’s Democratic Mayor Lori Lightfoot tweeted, “I support a big tent, but there’s no room under the flaps for anyone who is actively seeking to deny women control over our bodies.”

I support a big tent but there's no room under the flaps for anyone who is actively seeking to deny women control over our bodies. Time to leave @danlipinski. https://t.co/DvZaSP8jXx

Democrat TV analyst Marj Halperin piled on with a tweet of her own, saying, “I suspect Lipinski signing onto this brief is the equivalent to signing a resignation letter.”

I suspect Lipinski signing onto this brief is the equivalent to signing his resignation letter. I talked to lots of angry voters, canvassing in the 3rd District yesterday, ready to vote for @Marie4Congress More canvassers welcome, join @IndivisibleChi https://t.co/s8XaaoBneu

While Lipinski’s detractors are quite vocal, drawing much of the media’s coverage of the contentious Third District race, Lipinski has been endorsed by 28 mayors within his congressional district, according to Politico.

The amicus brief infuriating pro-abortion Democrats was filed by Americans United for Life in support of the case of Gee v. June Medical Services, LLC.

June Medical Services is an abortion facility in Shreveport, Louisiana that seeks to overturn provisions in Louisiana’s Unsafe Abortion Protection Act requiring abortuaries to have the same safety standards as other outpatient surgical centers, including requiring abortionists to have admitting privileges at a local hospital.

The brief argues that the Unsafe Abortion Protection Act is constitutional. It also states that Louisiana’s abortion facilities, including June Medical Services, “have a long history of serious health and safety violations.”

In response to his fellow Democrats who are apolplectic over his continued commitment to pro-life principles, Lipiski issued a statement explaining why he he signed onto the Supreme Court brief:

The Louisiana law in question requires hospital admitting privileges for physicians performing abortions. I signed the amicus brief because I agree with the intention of the law as stated by the author, Democratic Louisiana State Representative Katrina Jackson: ‘If you are going to perform abortions in the State of Louisiana, you’re going to do so in a safe environment and in a safe manner that offers women the optimal protection and care of their bodies.’ This is not an ‘undue burden.’

Both pro-life and pro-abortion activists believe this may be a watershed case, leading to the weakening or even overturning of Roe v. Wade.