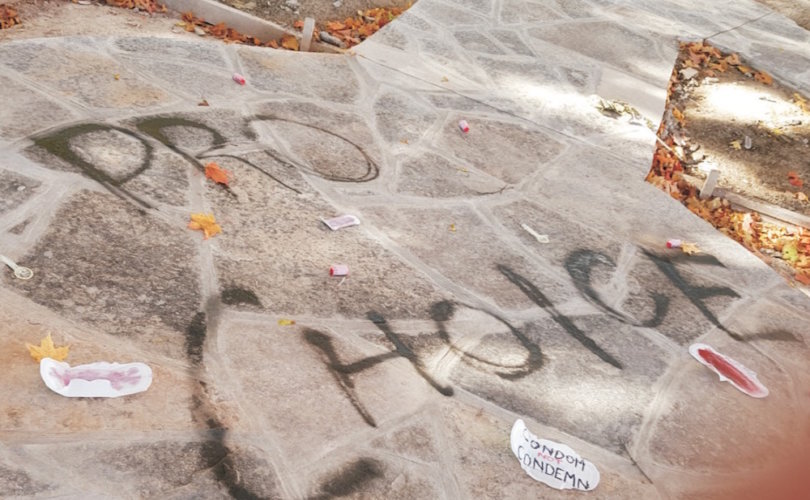 GUELPH, Ontario, October 11, 2016 (LifeSiteNews) – Supporters of abortion vandalized a new memorial for the unborn victims of abortion in Guelph on Sunday, spraying graffiti and dropping condoms on it. The incident occurred after a protest on Friday.

The memorial, which is nearing completion, is a “Garden of Grace” erected by pro-life advocates beside the city’s landmark Basilica of Our Lady.

Sometime after Sunday morning Mass, vandals painted pro-abortion slogans on the newly installed flagstones such as “Condom not Condemn,” and draped the area where a gazebo will soon be built with condoms and used tampons.

The protest Friday night drew 50-plus demonstrators carrying familiar pro-abortion signage such as “If you don’t trust me with choice how can you trust me with a baby?” and “More love, less shame,” in keeping with the organizers’ contention that the garden, a project of the Guelph and Area Right to Life group, shamed women who had abortions and attacked the pro-choice movement.

Protest co-organizer Sara Bortolon-Vettort told the Guelph Today that she had no problem with a place for women who had experienced miscarriages to grieve; but a garden that also helped women who had abortions mourn was really “guilting people over their abortions. ” “We are protesting against the part of the monument that is vilifying pro-choice.”

After the rally she told the Guelph Mercury she wanted the park’s creators to omit the statue showing an angel kneeling in front of an empty crib and the mourning of aborted babies.

The rally itself was peaceful, said Jakki Jeffs, the past president of Guelph and Area Right to Life and the main proponent of the garden. “But a half dozen protesters came up the hill onto church property and took selfies. We called the police because they were trespassing.”

It was sometime between late Sunday morning, when Jeffs visited the garden with a workman, and Monday morning that the vandalism was done. “The police came and took away the paper with the messages on it and an empty box of condoms,” Jeffs told LifeSiteNews. “They are hoping for fingerprints.”

Jeffs said the organization has not changed its plans for the garden and its theme. “We will carry on and the garden will be here long after these protesters are gone,” she promised. She will likely ask the church to install security cameras.

“I’m very disappointed by this,” she added. “I had set a higher bar in my mind for the other side. I didn’t think they would stoop to vandalism. They don’t understand that what makes this country great is that we disagree and still get along without violence or crime.”

On social media two people identifying themselves as rally organizers, “Serafina BV” and Carly Hunt, tried to distance themselves from the vandalism. “We did not vandalize this space. This is unfortunate and upsetting as this is something that could have been dealt with in a more mature manner. Vandalism is not part of our pro-choice message.”

But Jeffs says the organizers need to take more responsibility for what was inspired by their protest.

She told LifeSiteNews that in her volunteer work she has supported many people mourning both their miscarried and aborted unborn children and it was this experience which convinced her they needed a place like the Garden of Grace.

“Before they reach 20 weeks, their bodies are disposed of with the medical waste,” she said. “So there is no funeral or cemetery plot.”

Guelph and Area Right to Life raised the $91,000 to landscape the garden and pay for two bronze sculptures. The group’s website explains that while babies who die after birth are routinely are memorialized through funerals and burials in cemeteries, “when children die in the very early stages of pregnancy, families often have no grave to visit. Our vision is to create a place where parents can go to remember, to find comfort, and to heal: The Garden of Grace.”

Jeffs explained to the Guelph Today: “I had the idea about three years ago that maybe we could find a space where it would be safe for them to…recognize their little one and reflect on the decision they made.”

Jeffs noted that those who have abortions or miscarriages are just supposed to “get over these acts and move on. A woman can convince herself in the head that she hasn’t killed a baby but she can’t convince her body or her heart.” She will still need to grieve. “You have to clean out a wound and let it drain for it to heal.”

But for Bortolon-Vettor, the garden, or at least “that part of the monument” devoted to post-abortive mothers, is a purely political act. What’s more, she sometimes visits the basilica to enjoy it as a work of art and complains she will no longer be able to do so. “It offends me that I can’t go up those steps anymore, or I can’t enjoy the art and the architecture of Church of Our Lady anymore.”

But Canada Silent No More, an organization for post-abortive mothers, supports the gardens. Stated spokeperson Denise Mountenay on Facebook: “On behalf of Canada Silent No More…we appreciate this Memorial and dedication to women like us who deeply REGRET our abortions. It is also wonderful for grieving post abortive women to know they have a place to go to grieve the loss of aborted children.”

She added: “Anyone who cannot understand this is cold and has no consideration for hurting women who mourn the loss of their children no matter how small. Most of us were pressured into it, and many of us have suffered physically and emotionally as a result of legal abortions…it is not a ‘safe’ procedure and killed our children.”

The garden has been landscaped, but planting will have to wait till the Spring, said Jeffs, as will the installation of bronze statues of Jesus Christ and the angel, both the work of Ontario artist Timothy Schmaltz.  The official opening will be on May 31, 2017.

Donations and words of support can be sent to Guelph and Area Right to Life Association, 26, Norfolk Street, Guelph Ontario N1H 4H8. Online donations can be made at www.guelphforlife.com. The donate button is very easy to see.