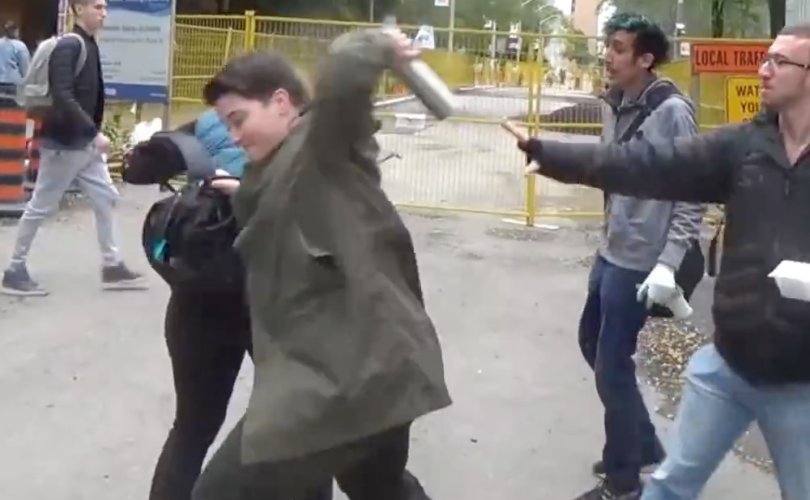 Gabby Skwarko during an attack against pro-lifers at Ryerson University, Oct. 2018.

Gabby Skwarko, 23, also apologized for her October 1 attack on Katie Somers and Blaise Alleyne of Toronto Against Abortion (TAA), saying she had let down her family. Her parents, her brother and uncle were in court, reported Global News.

The judge accepted a joint recommendation from Crown and defence lawyers that Skwarko be given a conditional discharge and 18 months’ probation, which means she will have no criminal record.

The judge will formally pronounce the sentence May 10, Global reported.

A member of the Ryerson Reproductive Justice Collective (RRJC) at the time of the assault, Skwarko is caught on video approaching Alleyne and Somers, members of a TAA group displaying images of abortion victims, from behind.

She kicks and pushes Alleyne, swings and then throws a metal dolly cart. She then repeatedly pushes Somers, who cries out in alarm and tries to evade her assailant. Skwarko then attempts to tear a backpack off Somers, then takes what appears to be a thermos from it and throws it on the ground.

Another member of RRJC can be seen trying to block a camera filming the event. Skwarko can be heard saying: “C’mon, let’s go…You filming me? Let’s do it.”

Somers was bruised in the attack and told the court in a victim impact statement she suffered post-traumatic stress disorder because of the assault, and that her family doesn’t want her to continue pro-life advocacy because they fear for her safety.

However, she was grateful that Skwarko publicly apologized, Somers told Global News.

“I thanked her, it meant a lot to hear her express remorse for what she did,” she said. “I’m glad Gabby is pleading guilty and taking responsibility for her actions and I hope the ruling will be a sufficient deterrent.”

That was echoed by Alleyne.

“I’m happy she pled guilty and is taking responsibility,” he told LifeSiteNews. “I’ve never faced this kind of violence before. It’s just beyond the pale.”

“My understanding is that this is an appropriately serious outcome in our criminal justice system for an offence like this,” added Alleyne.

“We don’t wish her any ill will and I hope that this is a time for her to reflect and grow and learn from her mistake.”

Alleyne said in his victim impact statement he found Skwarko’s violence particularly disturbing because she knew him and Somers from previous demonstrations, he told LifeSiteNews.

“It was shocking to me that she knew us and she still wished us harm,” Alleyne said.

“She came up behind us and tried to hurt us…Our signs were closed we were getting ready to go. We were talking with people from her group and having a civil conversation, and she just laid into us and injured Katie and assaulted me as well,” he said.

Ryerson suspended Skwarko and barred her from campus for a year after charges were laid against her last year, and she lost her job at the university.

Alleyne has been witnessing for life on campuses for 15 years, and his group “had a practice of not publicizing incidents or the violence that we’ve faced,” because “we’re not the victims, the babies are,” he told LifeSiteNews.

But that has changed in the face of increasing violence “against peaceful pro-lifers.”

Hunt has been charged with multiple counts of assault and mischief for that and a similar incident in August, and his next court appearance on June 13 is expected to lead to a resolution.

Alleyne told LifeSiteNews he was assaulted three times last fall, something he’d never experienced hitherto in his years as a public pro-life advocate.

He said the situation is particularly bad at Ryerson University, where incidents of harassment and intimidation come “not exclusively but especially from members” of the Ryerson Reproductive Justice Collective.

Alleyne has filed “upwards of 30 reports” with Toronto police and campus security “for thefts and mischief and property damage and assaults” since his group began holding regular pro-life demonstrations at Ryerson in 2016.

TAA always films its demonstrations as a safety measure, and most people stop their aggressive behaviour once realize they are on camera — although that didn’t happen with Skwarko, he said.

“We know these incidents are not the norm but we’re fighting back hard and speaking out publicly because they’re increasingly common,” Alleyne said.

“Our work is too important and too fruitful and too productive to be scared off from doing it,” he added.

“If we don’t defend our rights of freedom of expression, we can’t be a voice for the voiceless.”