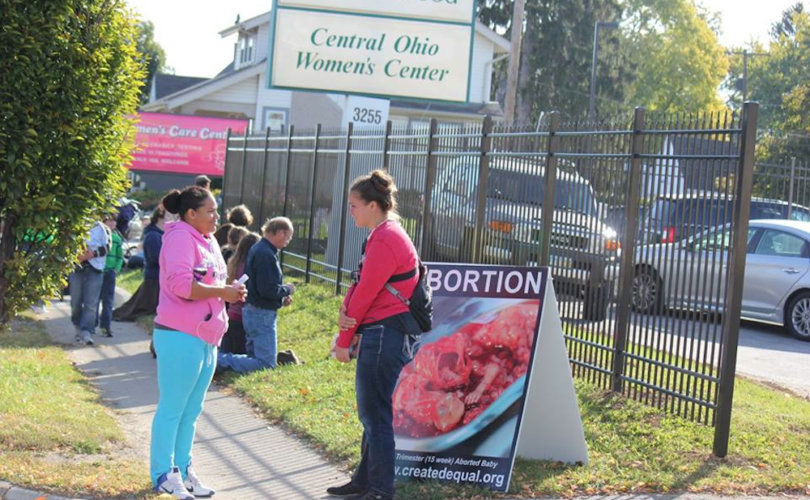 COLUMBUS, Ohio, May 30, 2017 (LifeSiteNews) — Ohio lawmakers are trying for the second time in as many years to criminalize peaceful pro-life activities outside of abortion businesses.

Created Equal pro-lifers have been peacefully praying and offering counsel to men and women going into the Columbus Planned Parenthood. In October, November, and December 2016, the group says its prayers and efforts resulted in 44 women turning away from the abortion giant — nine of whom personally confirmed that they will give birth to their babies.

Abortion advocates countered last week by introducing House Bill 234, which makes it illegal to “annoy” — by the offended person's determination — anyone going to an abortion clinic. The legislation proposes jail time of up to 18 months and fines up to $5,000 for repeat “annoyers.”

HB 234 states its purpose is to “create a cause of action for harassment or intimidation” outside an abortion clinic. The “cause of action” is to sue any pro-lifer trying to talk to a woman considering aborting her baby.

The bill defines “harassment” as conduct that makes someone “alarmed, annoyed, or harassed.” It defines “intimidation” as conduct that “causes fear or apprehension.” It creates a buffer zone disallowing peaceful prayer or counseling 15 feet from abortion clinics.

“This is an unconstitutional assault on free speech,” Created Equal Director of Training Seth Drayer told LifeSiteNews. “This bill has as its target peaceful pro-life citizens praying on the sidewalks.”

Most important, the bill's vague language leaves any pro-life presence open to prosecution. “It exchanges objective criteria of disorderly conduct, which is already illegal, for subjective criteria,” Drayer explained. “This bill would criminalize any behavior which 'annoys' someone outside abortion facilities.”

Drayer says the motivation behind the bill is profit. “When Planned Parenthood is routinely losing business because of the peaceful efforts of Created Equal and other groups, there is no question whether or not they are annoyed,” he said. “But being bothered is not grounds for criminalizing free speech.”

Created Equal Director Mark Harrington calls the 15-foot buffer a “censorship zone.” He measured 15 feet from Columbus' Planned Parenthood abortuary to demonstrate that the bill would not only take pro-lifers off the sidewalk, but literally put them into the street.

“It's not about 'choice' for them,” Harrington said in a video. “It's about bullying, about shutting down free speech. It's about intimidation.”

Created Equal faced the same opposition last year, when the Columbus City Council proposed a similar ordinance. Created Equal pro-lifers fought the proposed legislation, testifying against it in hearings. The police challenged its enforceability. Even the American Civil Liberties Union (ACLU) of Ohio opposed it as an “unacceptable barrier to free speech.”

In the end, last year's proposed ordinance was gutted into a redundant law having no impact on pro-life prayer and peaceful counseling at abortion clinics.

“The majority of what is being proposed addresses conduct that is already illegal under local and state law,” the ACLU letter to the Columbus City Council read.

“We have faced this before — desperate efforts by advocates of abortion to censor our efforts,” Drayer told LifeSiteNews. “We will not be intimidated, because we know that the real injustice is being done not by those praying on the sidewalk but those dismembering babies inside the facilities.”