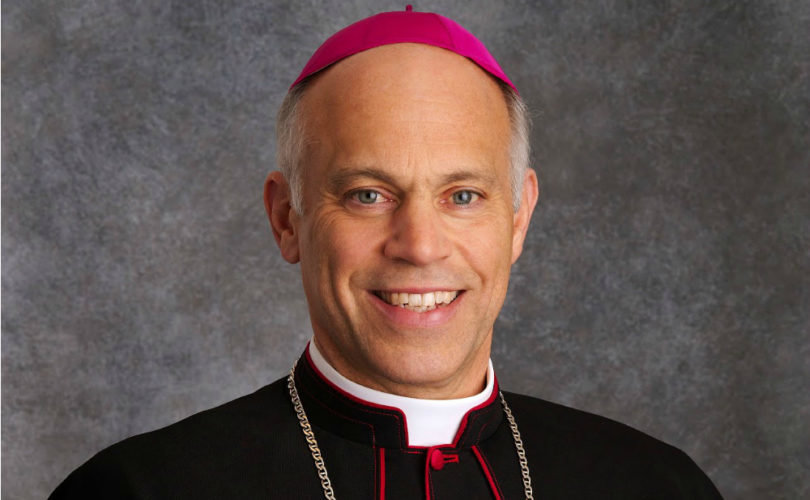 SAN FRANCISCO, California, October 11, 2017 (LifeSiteNews) — Those who doubt the existence of hell, despite Our Lady of Fatima showing its horrors to three Portuguese shepherd children 100 years ago, can nevertheless see a “living reflection of hell” in abortion, euthanasia, and homosexuality, said San Francisco Archbishop Salvatore Cordileone.

Archbishop Cordileone made his remarks during a homily last weekend as he consecrated his Archdiocese to the Immaculate Heart of Mary.

He recalled during his October 7 homily the great evils witnessed in the past 100 years, including the great world wars, death camps, numerous genocides, and Christian persecution.

“Who would dare to say that such barbarity is not a mocking of God?” he asked.

Cordileone listed legal abortion as one of the many genocides.

“And then there is the attack on innocent human life: Our own land has been soiled by the blood of innocent children in what has become a deadly epidemic tantamount to a genocide on life in the womb,” he said.

“And now we are increasingly witnessing the abandonment of our suffering brothers and sisters at the other end of life’s journey,” he added, in a reference to euthanasia and assisted suicide of the elderly.

The Archbishop went on to list legal homosexual “marriage,” and made a reference to Pride Parades, as ways in which God is mocked.

“And even in our own city of St. Francis, we see … the celebration and even exaltation of the vulgar and the blasphemous, mocking God’s beautiful plan in how He created us, in our very bodies, for communion with one another and Himself,” he said.

“God is roundly mocked in our very streets, and it is met with approval and applause in our community – and yet, we remain silent,” he added.

Friday, October 13, marks the 100th anniversary of Fatima’s “miracle of the sun.” The day commemorates the last apparition of Our Lady of Fatima to the three children and the fulfillment of the promised “sign.” Tens of thousands of people, including atheists and those who had come to mock the children, witnessed the sun dancing and emitting radiant colors in the sky.

Cordileone said that today, 100 years after the Fatima apparition, shows itself to be “in so many ways … a living reflection of hell, one that on so many fronts has roundly mocked God.”

“If we think about what has transpired in these last 100 years,” the Archbishop said, “does it not tell us that the century through which we have just passed was nothing other than an experience of hell?”

“The century since the Fatima apparitions now ending has mocked God, but God will not be mocked: not because He delights in wreaking vengeance on us, but because turning our backs on God only bounces back to us, leading to our own self-destruction,” he said.

The Archbishop said that now, more than ever, people must “heed the message of Fatima in imploring God for mercy,” especially through her request of “prayer, penance and adoration.”

He asked every Catholic in the Archdiocese to honor Our Lady’s request by praying the Rosary “every day.”

He also asked Catholics in his diocese to do penance on every Friday of the year.

“I ask every Catholic in the Archdiocese of San Francisco to dedicate Friday as a day of penance in honor of the day that our Lord died for us, selecting one concrete form of bodily fasting to observe on this day, whether that be abstaining from meat or another type of food or from some type of drink they normally enjoy, or omitting a meal altogether,” he said.

Finally, he asked Catholics to honor Our Lady’s request by praying before God in adoration once a week.

“I ask every Catholic in the Archdiocese of San Francisco to dedicate some time each week to pray before the Blessed Sacrament. If it is not possible during the week, take some time before or after Sunday Mass to pray on your knees before our Lord present in the tabernacle. At least some time every week praying before the presence of our Lord in the Blessed Sacrament – Body, Blood, Soul and Divinity – will fulfill his desire that we ask him for mercy,” he said.

He also asked that Catholics observe the devotion of the First Five Saturdays once a year.

“The devotion consists of attending Mass and receiving Communion in reparation for sins on five consecutive first Saturdays of the month shortly after or before going to Confession, and spending a quarter of an hour praying five decades of the Rosary,” he said.

Cordileone said that if Catholics honor the requests of Our Lady, it will hasten the fulfillment of her promise that “In the end, my Immaculate Heart will triumph.”

“Let us heed her message, let us grant her requests, in order to hasten that triumph, that triumph which is that of her Son over death, for she is inseparably linked to her Son, who came to win for us our eternal salvation,” he said.

“Her Immaculate Heart is the door that opens up for us entrance into that triumph. It is through that door that we walk from the darkness of sin and death to the light of Christ’s truth and mercy. There it is, on the other side of that door, a glorious, vast, light-filled paradise that is heaven. Her heart is the gate of heaven,” he added.