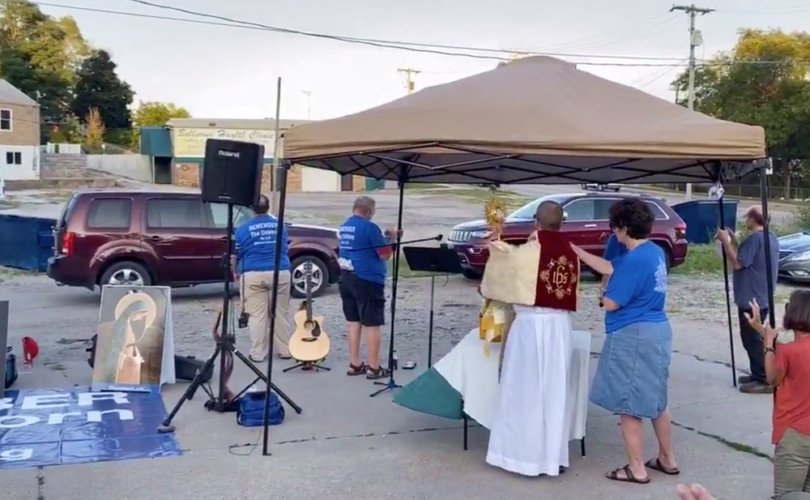 Fr. Michael Voithofer makes the sign of the Cross with the Blessed Sacrament over the Carhart Abortion center in Bellevue, Nebraska, July 16, 2020.Grace Castle

Pro-lifers on the ground told LifeSiteNews that after the prayer rally, there were no abortion appointments at the center on the usual killing days (Friday and Saturday), something that has not happened since they’ve been doing sidewalk advocacy there. It remains unclear if abortions will resume tomorrow (Thursday).

On July 16, the pro-life group Life Runners sponsored an Ablaze prayer vigil at Carhart abortion facility in Bellevue, known as “Bellevue Health Clinic.” LIFE Runners, a pro-life organization, teamed up with Ablaze, a Catholic ministry program, to organise an evening of prayer, singing, and adoration across from the abortion center. About 75 people gathered for the event.

Chaplet of Reparation for Priests

Ablaze music and adoration at Carhart's abortion facility. Just before the start, we encouraged a mother to leave the abortion facility and helped her schedule an appointment with a real clinic (Sancta Familia). Fr. Michael led 75 LIFE Runners in Benediction, Litany of the Saints, and Exorcism over abortion facility. Facility was closed the next two days. All In Christ for Pro-Life! #RememberTheUnborn

At one point during the prayer event, Fr. Michael Voithofer, the founder and leader of Ablaze, made the sign of the cross over the abortion center with the Blessed Sacrament. He also prayed the St. Michael prayer written by Pope Leo XIII and recited the litany of the saints.

Dr. Patrick Castle, the founder of Life Runners, told LifeSiteNews that their goal is to “end abortion now.” He pointed out how “one in three women in America have had an abortion; one in five conceptions in America end in abortion.”

Castle said that abortion takes more lives than all “combat casualties in the history of our country.” He explained that the fight to end abortion is a “spiritual war.”

“We did a holy battle there,” he continued, “to push back the demonic, to claim that space in the Lord’s name.” Castle hopes to “memorialize the unborn that have been slaughtered there (at the abortion center).”

“Abortion is the greatest WMD, weapon of mass destruction,” Castle said. “It is the leading cause of death on the planet.” He said that the Holy Eucharist, “the most powerful spiritual weapon,” was used to fight abortion during the July 16 rally.

“The ground is blessed now so the mothers that go into the clinic will be walking on blessed ground in their moment of crisis,” he continued.

This was the first known time that the sign of the cross was made over the center with the Blessed Sacrament. Just last month, a Mass was celebrated across from the abortion center.

In an interview with LifeSiteNews, Fr. Michael said the fight to end abortion is a “spiritual battle.” He explained that, “praise is really a weapon we can use to ward off evil.”

“Our battle is not against people; it’s against demons,” he continued. “The devil wants to sacrifice these children.”

Offering prayer to God through singing is like a “blast of light that demons can’t stand,” said the priest.

By making the sign of the Cross with the Blessed Sacrament over the abortion center, Fr. Michael said he fought against “the demons and spirits that are behind this evil of abortion.”

“What perpetuates the abortion industry,” he explained, “is a demonic stronghold” that seeks to “destroy human life.”

“Every pregnant woman is a reminder to Satan that he’s done — he lost — because every pregnant mother reminds Satan of the Blessed Mother.”

Castle encouraged pro-lifers to go to abortion centers to fight with the weapon of prayer.

“We know that that is often enough for a mom to not turn in to that abortion facility,” he said.

The prayer vigil occurred during the pro-life Across America Relay, sponsored by LIFE Runners. The relay began on July 4 from the north, south, east, and west coasts of the United States. Four groups will walk or run 5359 miles in 5-kilometer legs, meeting in Kansas City on August 9 for a mass celebrated by Archbishop Naumann.

The only requirement to be a LIFE Runners is to wear a “REMEMBER The Unborn” jersey as “a public witness to impact hearts and minds for saving lives.” LIFE Runners has 14,657 members in 2,553 cities across 39 nations.

Castle explained the importance of wearing these jerseys, “78% of post abortion mothers say that if just one person had encouraged them to choose life of if they saw an encouraging sign to choose life, they would not have aborted their child.”

Castle explained that pro-lifers can sign up to remotely participate by walking or running 5 KM legs while wearing LIFE Runners jerseys anywhere in the world.