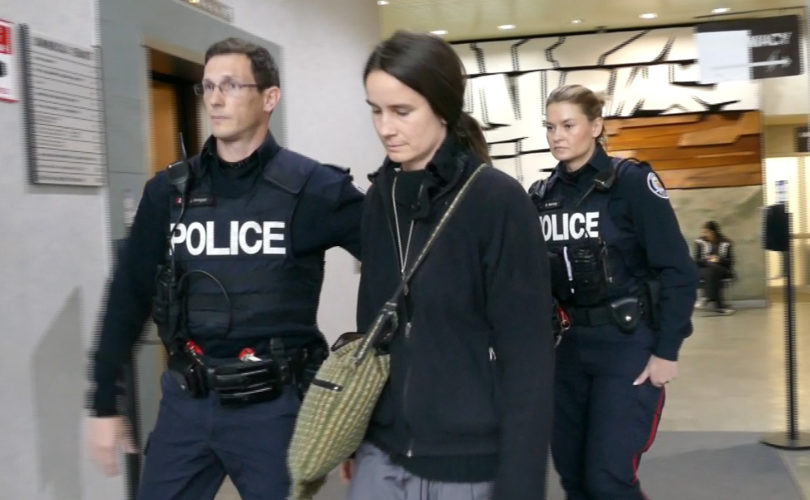 TORONTO, May 29, 2017 (LifeSiteNews) — An abortion facility is petitioning the courts in Canada to block LifeSiteNews from identifying its abortionist and other staff members.

LifeSiteNews went to court this week to fight a publication ban on the trial of pro-life activist Mary Wagner. Wagner has been jailed since December after allegedly entering Toronto’s Bloor West Village Women’s Clinic in an effort to convince women to choose life for their babies.

On Thursday, Judge Rick Libman of the Ontario Court of Justice ruled against an interim publication ban, leaving LifeSiteNews free to publish details of the case, pending a full hearing on the publication ban June 9.

The Crown only filed its application for the ban days before Wagner’s trial, which was to begin May 25. It seeks to ban any information that could identify women seeking abortions or “civilian” witnesses — abortion center staff and the abortionist — at the trial.

The ban would cover all exhibits filed at trial, including surveillance video footage inside the abortion center the day Wagner was arrested, as well as the contents of the application for the publication ban.

The Crown’s application specifically singled out LifeSiteNews, which reports on Wagner more than any other news outlet.

The Crown only notified LifeSiteNews of the application on Tuesday, and provided no supporting evidence until Thursday morning, just before Wagner's trial was to begin.

LifeSiteNews then launched an 11th hour defence of Wagner’s right to an open trial and its own right to publish details of the abortion industry.

Toronto lawyer Phil Horgan appeared in court on behalf of LifeSiteNews to contest the publication ban, which he described as an “extraordinary proposition.”

On Thursday, Horgan requested an adjournment of the matter so LifeSiteNews could prepare a defence, but not a delay of Wagner’s trial.

Wagner, 42, has been in jail since her arrest December 12, 2016 because she refuses in conscience to accept bail conditions requiring her to stay away from abortion centers.

Judge Libman spent much of the day hearing arguments and deliberating how to deal with the publication ban and the trial.

Wagner, who is representing herself, opposed both the publication ban and any delay of her trial.

In the end, Libman ruled he would hear arguments June 9 on the merits of the publication ban, which he deemed “very much a live issue.”

He also deferred until that day the testimony of the three “civilian” witnesses and the introduction of evidence that would potentially be affected by the publication ban hearing.

But Libman did not to impose an interim publication ban, citing Supreme Court and case law that narrowly circumscribed such orders.

Libman criticized the Crown for not notifying other media outlets of the ban. He had asked Power to try to do so during an earlier adjournment.

He also faulted the Crown for providing “late notice” on its intention to seek a publication ban, thus giving Wagner little or no time to prepare a defence.

Wagner’s trial date was set back in January, but she received served notice of the publication ban application at Vanier jail in Milton last Saturday.

Moreover, she and Horgan received supporting affidavit by one of the Bloor West Village Women’s Clinic abortionists, named in earlier LifeSiteNews coverage, only on the morning of the trial.

Horgan also cited late filing as one of his arguments against the ban.

The abortionist’s affidavit was sworn out by counsel for law firm McCarthy Tetrault, which is the Bay Street law firm that is generally known to look after the professional legal needs of the members of the Ontario Medical Association.

The abortionist stated in her affidavit that she and two abortion center employees had been subpoenaed to testify at Wagner’s trial, but that she feared reprisals from “unknown” pro-life activists if their names were published.

Mischianti testified she is Wagner’s supervising officer for two probation orders: one for two years issued Judge Mavis Wong on July 25, 2015, and another for three years issued by Judge Katrina Mulligan on April 25, 2016.

The orders ban Wagner from being within 100 meters of the Bloor West Village Women’s Clinic, as well 100 meters from any abortion facility in Ontario.

Wagner understood the terms of the orders and the consequences of breaching them, Mischianti told the Court.

Constable Trotter testified that she and partner David Rioux received a call at 11:50 a.m. on December 12 that there was “an unwelcome guest” at the Bloor West Village Women’s Clinic.

When the police officers arrived on the fourth floor, Wagner was standing in the hallway outside the abortion facility, Trotter said. “She was carrying a bunch, a bouquet so to speak, of brown flowers.”

The officers arrested Wagner for failing to comply with a probation order, she said.

On questioning from Judge Libman, Trotter testified that Wagner was “completely sober” and “very articulate and calm,” and that she and Wagner talked about “why she was there en route to the station.”

Wagner had no questions for the witnesses.

But when Libman asked her earlier for her thoughts on the publication ban, Wagner urged him to “see this whole trial” from “the view of little children killed” at the abortion center.

While the “principle of an open court is important,” she said, there was “nothing more fundamental” before the court than this fact.

“The reason why I’m incarcerated is because I was at an abortion clinic,” where doctors are “killing innocent children,” Wagner said. “That is a fundamental injustice.”

Among the some 20 supporters who came during Wagner’s trial at Old City Hall Courthouse were Linda Gibbons, who has spent 11 years in jail for her pro-life witness, and Mary Burnie, a longtime pro-life picketer.

Many held roses and waited in the corridor for Wagner as she was led to the courtroom from the holding cells below, her hands cuffed behind her back, following the frequent adjournments.

Wagner, who hails from B.C., has served almost five years in jail for her peaceful efforts to save women and unborn children from the violence of abortion.

Her trial will continue June 9 following Judge Libman’s hearing on the publication ban at Old City Hall Court in Toronto.

WATCH: Mary Wagner arrested again for trying to save babies at abortion center

Abortionist testifies against Mary Wagner, admits she tried to push Wagner out of clinic

She tried to save babies from abortion: now the gov’t wants to jail her for 18 months