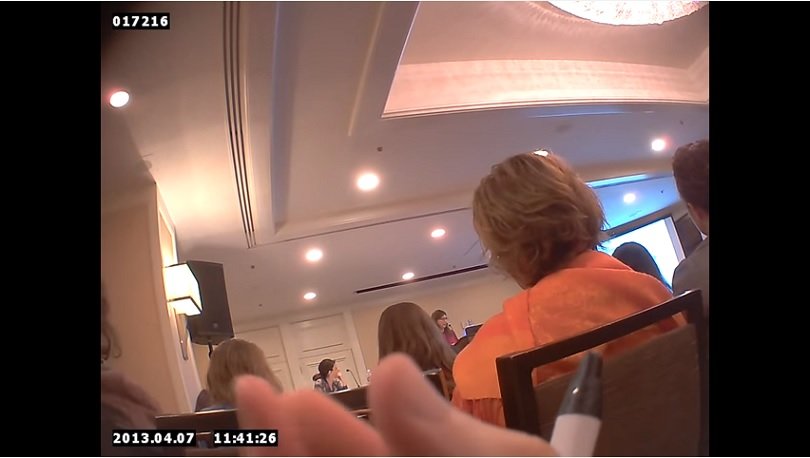 SAN FRANCISCO, October 30, 2015 (LifeSiteNews) – Post-abortive women who choose to share their regret publicly are “unreasonable” and “terribly unfair,” according to a speaker at the National Abortion Federation's annual conference.

In an undercover video taken by the Center for Medical Progress, the woman says that while such women “are being totally honest,” their actions are irrational and similar to a bitter divorcee warning all women to shun marriage.

She also stated that all abortion regulations should be seen as “age discrimination.”

The speaker told a session of the NAF's 2014 annual conference that all medical decisions are made based solely on a “best guess – you know, let's see how it works out.”

Numerous studies have confirmed a link between abortion, depression, and suicide. “Young adult women who undergo induced abortion may be at increased risk for subsequent depression,” according to a 2008 study by the University of Oslo.

Three years earlier, Finland’s National Research and Development Center for Welfare and Health (STAKES) found that deaths from suicide, accidents, and homicide are 248 percent higher in the year following an abortion, while women who had given birth in the past year had the lowest likelihood of death.

But women, “if they are not given all the facts, are likely to make their decision based solely on emotions and conjecture,” Butler told LifeSiteNews.

“Who better to share with them the reality of the aftermath of abortion than a woman who has already experienced an abortion?” she asked.

Yet the NAF speaker said the actions of groups like Silent No More would not withstand scrutiny.

A woman who regretted marriage would be “totally reasonable” to tell her sister about her regret,” said the speaker, whose name was not released with the hacked footage. “I think it would be unreasonable to stand outside a church, ya know, with a sign that says, 'I regret my marriage,'” telling passing women,”'I'm happy we met. So, don't do it. We have resources to help you stay single.'”

“I also think there's something terribly unfair about looking back at our former selves,” she said.

Butler said that analogy is “bogus.”

“Not all marriages end badly, but all abortions end in death for the baby,” she said. “And a nasty divorce is no match for knowing you took the life of an innocent human being, especially when it was your own child in your womb.”

“Most women regret having had” an abortion, she said.

She speaks from experience. Butler has spoken before the American Family Association about the profound sadness she felt over her own abortion.

“All those pats on the hand and kind words from the abortion workers meant nothing when I was alone with my thoughts and the panic attacks came,” Butler told LifeSiteNews. “None of them were there for me when I cried on the anniversary of my baby’s death every year. I was alone in my grief and regret for 20 years before I received healing in a post-abortive recovery ministry.”

“Maybe if someone had been as brutally honest with me about her [own] abortion, I wouldn’t be here talking about my abortion,” she said. “That is why I counsel young women in crisis pregnancies, and why I support Silent No More.”

The NAF speaker added that abortion legislation constituted age discrimination, because “legislators in their 50s, 60s, and 70s have a hard time putting themselves back in the shoes of people in their 20s.”

“Of course, we think of abortion issues as issues of gender discrimination, but I'd like to propose that we consider them issues of age discrimination, as well – an older generation not able to remember what it's like to be young,” she said.

Women in the audience audibly respond “Wow!” at the insight.

But polls show young people are more likely to support measures like the Pain Capable Unborn Child Protection Act than their elders.

“Having been involved in the passage of HB2 in Texas, I can assure you that it is not middle-aged folks trying to put themselves in the shoes of 20-somethings and make up laws,” she told LifeSiteNews. “These legislators work on behalf of their constituents – many of them young women, women who have experienced the pain of abortion, and men who have been hurt by abortion who are pushing this legislation.”

Despite widespread regret, the abortion industry has made a concerted effort to change the narrative about abortion regret in recent years. Jessica Grose of Slate asked for women to share “blithe and unapologetic,” happy abortion stories. A few writers have said they “venerate” abortion “wholeheartedly,” referring to the termination as “euphoric.”

But men are affected, as well. Mikhail Gorbachev, the former premier of the Soviet Union, revealed last fall that he continued to bear the pain of an abortion performed in 1953.

The segment about post-abortive women begins about 10 minutes into the video.