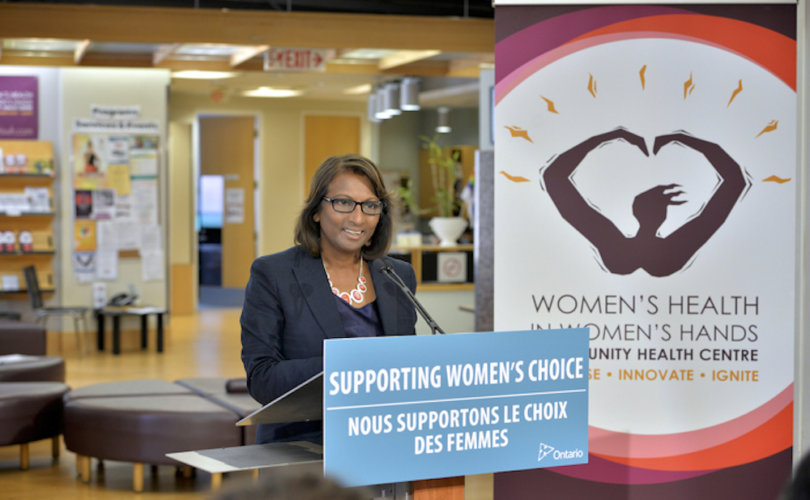 Status of Women Minister Indira Naidoo-Harris announces that the abortion pill will be available at no cost in Ontario.

TORONTO, August 3, 2017 (LifeSiteNews) — The Ontario Liberals announced today that the province will provide the abortion pill for free as of August 10.

The Liberals promised in their May budget they would pay for Mifegymiso, or RU-486.

Status of Women Minister Indira Naidoo-Harris announced Thursday that “women with a valid health card and prescription from their doctor or nurse practitioner” can get the abortion pill for free “at participating pharmacies across the province” in a week’s time.

The health ministry says the Society of Obstetricians and Gynaecologists of Canada has trained some 150 provincial healthcare providers who can prescribe medication to prescribe the abortion pill, the CBC reported.

Mifegymiso, or RU-486, is a two-drug combination of Mifepristone, which blocks progesterone, essentially starving the baby to death in utero, and Misoprostol, taken 24 to 48 hours later to induce labour to expel the dead baby.

“It’s disingenuous to pretend that this is an answer to a difficult pregnancy,” added Brownrigg. “This drug kills the child and can seriously harm the mother.”

Moreover, “there is a finite amount of money that can be spent on healthcare, and this is not healthcare,” she told LifeSiteNews.

Pro-life groups have long warned that not only is the abortion pill fatal for the child in the womb but it’s dangerous for the mother.

The abortion drug has been directly linked to the deaths of more than a dozen U.S. women and a number of women internationally.

“Unfortunately, ‘greater choice in reproductive health’ has taken precedence over the health of the health of the mother, the life of the child, provincial debt, and conscientious objecting taxpayers,” Bissonnette told LifeSiteNews in an earlier interview.

Health Canada approved the abortion pill in July 2015, and it has been available since January, at an estimated cost of $300 to $400.

Four provinces so far have have announced they will pay for the abortion pill under publicly funded healthcare insurance plans.

New Brunswick’s Liberal government under Brian Gallant was the first to announce it would do so.