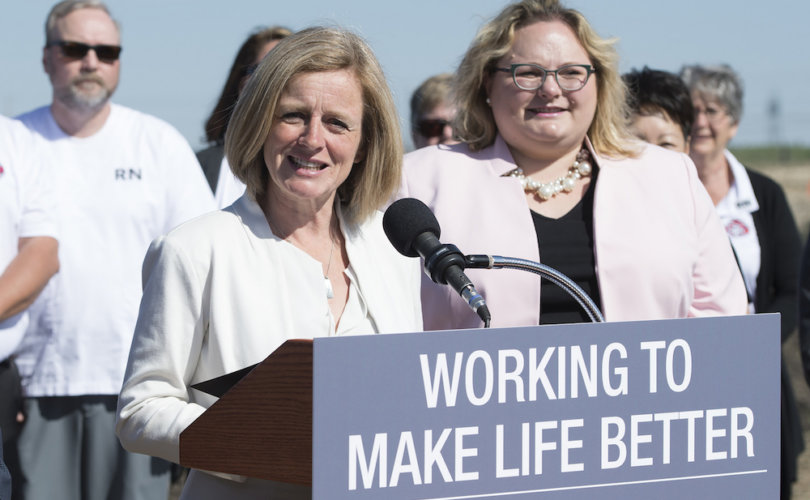 And that’s regardless of whether the woman has provincial health insurance, Health Minister Sarah Hoffman said last week during a panel discussion on Mifegymiso, or RU-486, reported the National Post.

“Any women who live in Alberta — I don’t care where you live, I don’t actually care whether you’re yet a citizen — they have the right to access this,” Hoffman said.

New Brunswick’s Liberal government under Brian Gallant was the first to announce it would provide the abortion pill for free.

Health Canada approved Mifegymiso in July 2015 under the federal Stephen Harper Conservatives to abort pregnancies of up to seven weeks’ gestation.

Abortion advocates are pushing to have that increased to nine weeks’ gestation, the National Post reported.

The abortion pill became available in January and costs from $300 to $450.

The two-drug combination includes Mifepristone, which blocks progesterone, essentially starving the baby to death, and Misoprostol, taken 24 to 48 hours later to induce labour to expel the dead baby.

The panel discussion on the abortion pill took place during a meeting of Canada’s premiers in Edmonton on July 17-19.

Sandeep Prasad, executive director of Action Canada for Sexual Health and Rights, was there to lobby premiers to pay for the abortion pill up front rather than reimburse women afterward.

He told the National Post that Liberal Premiers Stephen McNeil of Nova Scotia and Wade MacLauchlan of Prince Edward Island were interested, and that he is pushing for commitments before the health ministers meet in November.

Six provinces and three territories have yet to declare if they will pay for the abortion drug.

Pro-life groups have long warned that not only is the abortion pill fatal for the child in the womb but it’s dangerous for the mother.

“Unfortunately, ‘greater choice in reproductive health’ has taken precedence over the health of the health of the mother, the life of the child, provincial debt, and conscientious objecting taxpayers,” Marie-Claire Bissonnette, youth coordinator with Campaign Life Coalition, told LifeSiteNews.

The abortion drug has been directly linked to the deaths of more than a dozen U.S. women and a number of women internationally.

Meanwhile, Health Canada is “gradually relaxing restrictions on Mifegymiso’s prescription and distribution,” according to the National Post.