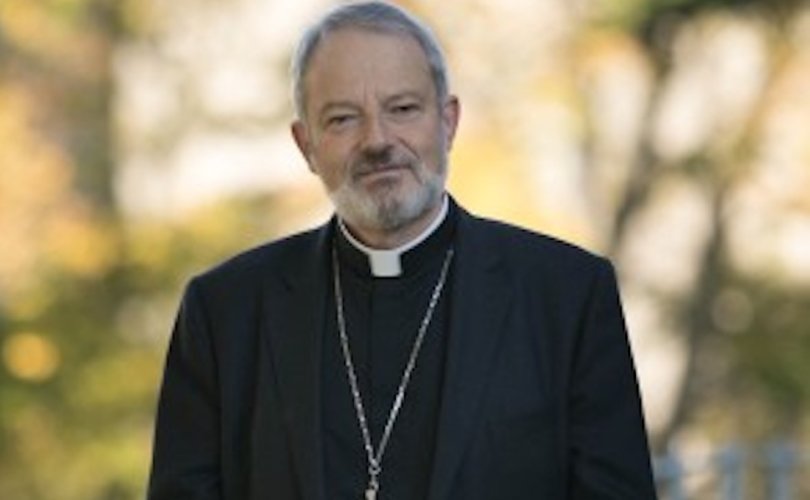 Bishop Kevin Doran of the Catholic Diocese of Elphin, Ireland

IRELAND, July 25, 2016 (LifeSiteNews) — The outspoken Bishop of Elphin might have sparked a new controversy by comparing current arguments for abortion of babies with so-called fatal defects to those of two German proponents of euthanasia that inspired mass executions of the mentally handicapped by Nazi Germany.

Bishop Kevin Doran has been in the news before for his public comments and was even forced to apologize by his ecclesial superiors at least once, for saying that while same-sex couples might have children that does not make them parents. This time, the Irish Bishops Conference has published his remarks to a pro-life conference in full on its website, complete with footnotes.

In a thoughtful speech addressing current efforts by feminists abetted by foreign human rights groups such as Amnesty International to throw out Ireland’s Eighth Amendment protecting the unborn, Doran described “an interesting but chilling pamphlet” written by German physician Alfred Hoche and attorney Karl Binding in 1920 justifying the killing of mentally impaired for the good of society. Their argument in Allowing the Destruction of Life Unworthy of Living was “based largely on the idea that people with intellectual disability had no contribution to make to society and no particular desire to live,” and  “formed the ideological basis for the mass murder of hundreds of thousands of so-called ‘undesirables’ in places like Hadamer Mental Hospital.”

Though this gave rise to headlines such as the Irish Journal’s “Bishop compares abortion to involuntary Nazi euthanasia programme,” Doran actually argued that the devaluation of human beings occurred on both sides in the Second World War. “The reality is that the racist and anti-semitic ideology which was so central to the Nazi war effort was also present in many other countries, on both sides of the conflict,” he said.

More to his point, the bishop likened the arguments of Hoche and Binding to those pushing repeal of the Eighth Amendment for abortions “in the case of (unborn babies with) life-threatening illness. … It is the acceptance of the principle that there is such a thing as a human life without value.”

This belief might be consistent with a pagan worldview of life as a randomized game played with capricious fates, but it is not consistent, he said, with the Christian belief that “our own life is a gift from God, rather than just some kind of random occurrence. If we can understand our own lives in that way, then I think it is easier to see other people, including the elderly, the unborn, the poor and people with disability as gifts from God, irrespective of what they can contribute to society or what they can achieve in their lives.”

Doran then added, “As it happens, I had the privilege just this evening to spend some time with a family whose five-year-old child is in the final stages of such an illness. Needless to say, they are very sad, but deeply grateful for the gift of their little child, who has been such a focus of love in their lives. Can I ask you to pause with me in quietness for a few moments, to remember them in prayer?”

Doran said he joined other Irish pro-lifers in 1983 to push through the passage of the Eighth Amendment because other European countries were legalizing abortion. The move proved prescient, he said, because it held back a similar expansion of abortion in Ireland.

“I am convinced that thousands of lives have been saved and, notwithstanding the large numbers who traveled to England over the years, a great number of women were culturally supported in not choosing abortion,” he said. (Ireland has an abortion rate one-fourth of that in nearby England, Scotland and Wales.)

So far, there is no backlash to Doran’s Nazi comparison. More of a storm was caused by his comments during the debate over same-sex marriage last year that homosexuals “having” children wasn’t the same as their being real parents. “This legislation,” he told an interviewer, “that the government is introducing —  the Children and Family Relationships Bill — seems primarily focused about making it possible for people in various different relationships to have children. It's not about ensuring that children have their parents.”