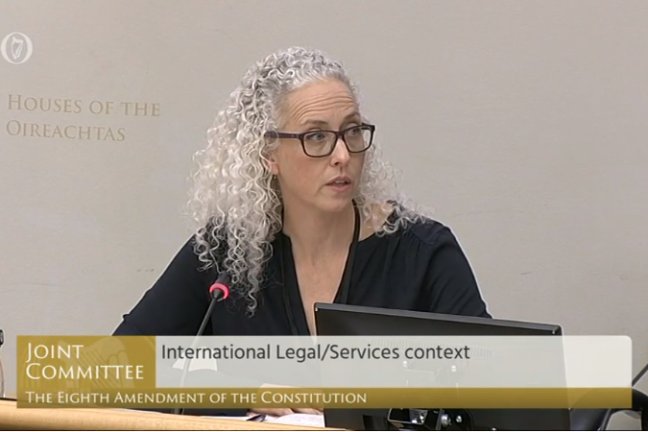 November 24, 2017 (SPUC) – On Wednesday, Dr. Patricia Lohr, Medical Director of bpas, appeared in front of the Irish Joint Committee examining the Eighth Amendment, and her answers shocked some of the TDs.

Fine Gael TD Peter Fitzpatrick began his questioning by referring to Ann Furedi's comments on Loose Women. The head of bpas shocked panellists on the daytime television show in August when she said the 24 week limit on abortion should be scrapped, and that it was “always down to the woman” if she wanted to abort her baby because it was the wrong gender.

Though she claimed not to have seen the programme or know the content of her boss' statement, Dr Lohr described situations when legal grounds could be used to facilitate a sex selective abortion, and said “I absolutely agree with the view that it is for the woman to decide when and whether she is ready to parent.”

Mr Fitzpatrick said that bpas is “a horrifying charity, where it's CEO is encouraging gender selection.” He also said that most people would be horrified at the idea of abortion after 24 weeks, which Ann Furedi promoted, and that he was “very disappointed” that Dr Lohr was unable to answer questions on how many abortions bpas had carried out on the grounds of the baby having a chromosomal condition such as Down's syndrome.

Dr Lohr also faced tough questions from Senator Ronan Mullen, who began by noting that bpas had been reprimanded by the Care Quality Commission after its Merseyside clinic was found to have a catalogue of safety issues.

He also asked her how many abortions she had personally been involved in, to which she answered: “I don't think I can give you a number. Hundreds, thousands, maybe – I don't keep track.” The full meeting can be viewed here.

The Committee has met earlier to discuss accusations of bias against it in favour of abortion, claims that one TD dismissed as “utter nonsense”.