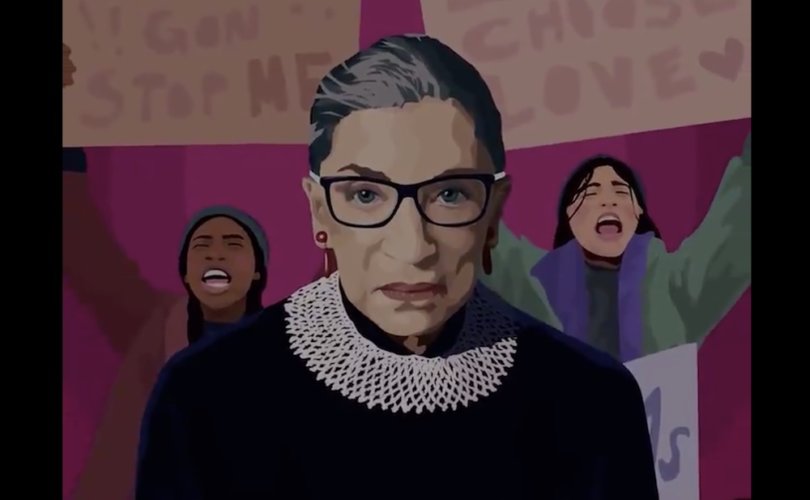 One of the paintings displayed at the "Abortion Is Normal" exhibit in New York City, January 2020.Twitter video screenshot

NEW YORK CITY, January 16, 2020 (LifeSiteNews) – A new art exhibit in the Big Apple purports to combat abortion stigma and raise money for the nation’s top abortion chain with the title and message “Abortion is Normal.”

Organized by the group Downtown for Democracy and running for the rest of January, the self-described “emergency” exhibit bills itself as an “urgent call-to-action exhibition to raise both awareness and funding in support of accessible, safe, and legal abortion,” with a “heterogeneous array of artists countering with their personal response to abortion and abortion access in order to create an inclusive and empathetic entry point to this conversation.”

The titular message “intended as a statement of camaraderie and caring that in short says: What you choose to do with your body is OK,” and a “basic human right” (accompanied by a qualifier stressing that the word “normal” is not meant in an “ableist” way).

Proceeds from the event will go to Planned Parenthood’s 2020 campaign spending as well as “voter education and advocacy” efforts. The Observer’s Helen Holmes writes, approvingly, that the show “features a true murderers’ row of incredible artwork for sale.”

The Abortion Is Normal website, a Bloomberg highlight video, and a Daily Beast report display and describe several examples of the event’s “art,” much of which is sexual in nature. There are nude photographs and paintings, figures bearing “Thank God for Abortion” shirts, paintings of Supreme Court Justice Ruth Bader Ginsburg, and various simple displays of rudimentary written slogans and buzzwords, like “Choice” and “Dear Judge Kavanaugh, if you don’t like abortions don’t get one.”

This is just the latest in a long wave of projects like “Shout Your Abortion” and “Thank God for Abortion,” which are rooted in the theory that “positive” abortion narratives are the key to solidifying public opinion, by emphasizing abortion’s supposed beneficiaries and pushing back against any suggestion that the practice is less than wholesome.

Such demonstrations have had little impact on majority opposition to most abortions, however, because they fail to address the core reasons abortion is opposed: recognition of and compassion for the children threatened by the procedure. They also fail to account for the testimony of women who speak against abortion from their own experiences of guilt, physical arm, and mental and emotional suffering, via groups such as Silent No More, Rachel’s Vineyard, After Abortion, and Abortion Recovery International.