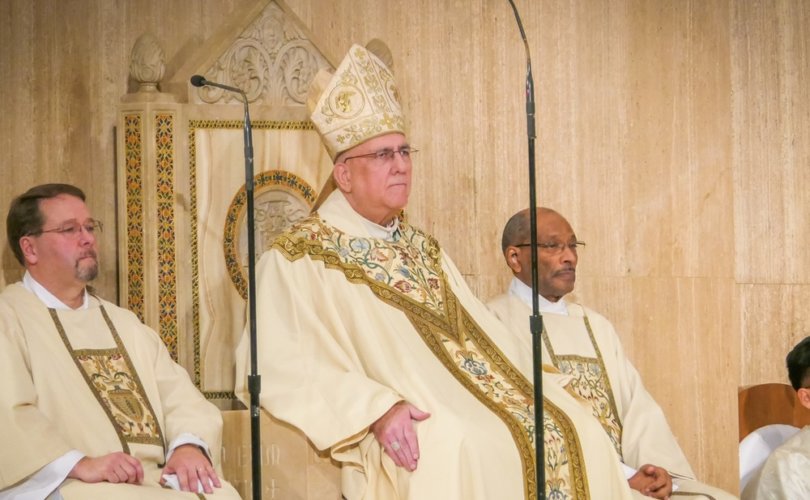 WASHINGTON, D.C., January 24, 2020 (LifeSiteNews) — The American bishops and Pope Francis both affirm that the “preeminent priority” for Catholics when voting is the protection of the child in the womb, said Archbishop Joseph Naumann in his homily for Thursday’s vigil Mass for the March for Life.

His statement drew a spontaneous burst of applause from hundreds who packed in the Basilica Shrine of the Immaculate Conception in Washington on the eve of the march, which marks the Supreme Court’s 1973 Roe v Wade ruling legalizing abortion in the United States.

The archbishop of Kansas City, Kansas, and chairman of the USCCB’s committee on pro-life activities, Naumann said the bishops approved a document in November that provides “guidance to Catholics as they exercise their responsibility as voters.”

And while Catholics must consider “many important societal issues with great moral significance,” such as immigration reform, care for refugees and the poor, health care, religious liberty, and the “care for creation,” the bishops “affirmed that the protection of the unborn remains the preeminent priority,” Naumann said, to a burst of applause.

The bishops’ document cited Pope St. John Paul II’s “landmark and prophetic” encyclical The Gospel of Life, issued 25 years ago this March 25, the feast of the Annunciation, he said.

The sainted pontiff noted that the “vast array of threats to human life” included poverty, the arms trade, drugs, and the promotion of “certain forms of sexual activity,” but “spoke clearly that special attention should be given to the issues of abortion and euthanasia,” Naumann observed.

St. John Paul stated three reasons why the protection of the unborn must be a priority.

First, current laws “exalt abortion as a positive good and a right”; second, abortion “attacks human life at the time of its greatest frailty,” and finally, abortion’s “personal and societal consequences are more serious because they are carried out in the very heart of and with the complicity of the family,” which “by its very nature is called to be the sanctuary of life.”

Moreover, the “sheer number” of those killed by abortion “elevates its importance compared to other threats to life,” Naumann said.

Since 1973, 61 million unborn children have been killed by abortion and each had a father and mother “who’ve been starved by the death of their child.”

Naumann also related that when he and bishops from Iowa, Missouri, and Nebraska met with Pope Francis one week ago for their ad limina visit, “I told him that we received some criticism, even being accused of insulting the pope.”

The pope “appeared stunned,” and asked why.

“And I said because we called the protection of the unborn a ‘preeminent priority,’ and his immediate response was, ‘It is a preeminent priority’. Pope Francis said if we do not defend life, no other rights matter,” Naumann said.

“God and 14 other bishops are my witnesses that Pope Francis was passionate in the support of the Church’s pro-life efforts. My friends, the successor of Peter has our backs,” added the archbishop, to applause.

The Holy Father was also “aware of this March for Life” and “delighted” at the expected large numbers, and “ordered” Naumann to “please tell the pilgrims at the March for Life and the entire pro-life community, the pope is with you, he is praying for you, he supports you, he encourages you to persevere.”

Pope Francis has stoked confusion in past on the priority of the pro-life issue in voting, contradicting previous popes by seeming to place abortion on a level with prudential issues such as immigration.

Throughout his pontificate, he has prioritized lobbying world leaders on climate change, immigration, and other issues while failing to intervene on non-negotiable moral issues such as abortion and same-sex “marriage.”

According to Naumann, Pope Francis was “thrilled” with the USCCB initiative to mark the 25th anniversary of the Gospel of Life: “Walking with Moms In Need: A year of Service,” Naumann said.

This initiative will encourage every Catholic parish in the United States, which number well over 17,000, to consider what “practical steps” they can take to help mothers facing difficult pregnancies, Naumann said.

Many women who choose abortion are “young, poor and unmarried, and “moms in need are best reached at the local level,” he said.

“Pope Francis reminds us parish called to be islands of mercy in the midst of the sea of indifference.”

He noted that Pope John Paul in the Gospel of Life “cautioned us about he termed ‘an extremely serious and mortal danger that of confusion between good and evil, precisely in relation to the fundamental right to life.”

The saint wrote that “this moral confusion results in part from a distorted notion of freedom, of freedom that is untethered from truth,” Naumann said.

“Freedom separated from truth in the end creates a tyrant state that allows and even encourages the disposal of life when it is weakest.”

This is evident in the United States, where, since the 47 years since Roe v Wade, “the killing of one’s child is exalted as heroic and brave,” and Americans live in an “ethically topsy-turvy twilight zone” in which abortion is “now hailed as the cornerstone of human rights,” Nauman said.

“Despite a biased secular media, decades persistent pro-life educational efforts have resulted in our nation’s youth being more pro-life than their parents,” he said, to sustained applause.