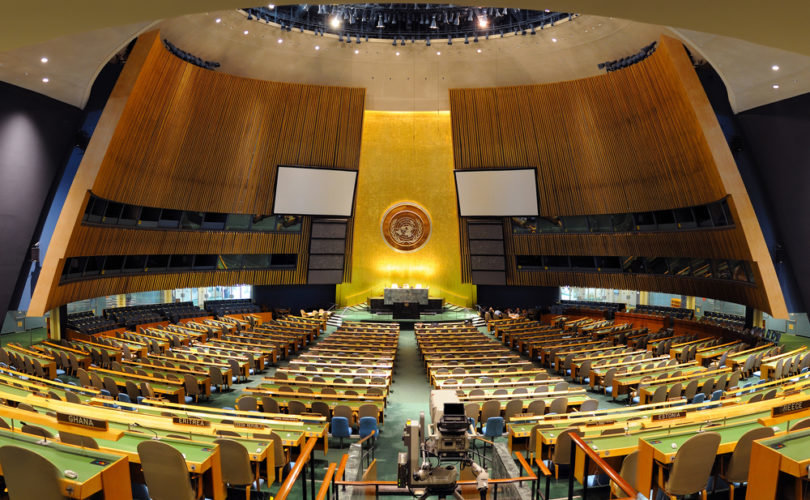 March 26, 2018 (C-Fam) – The world's top abortion and LGBT activist groups have joined forces to stop the Trump administration from implementing its international pro-life agenda at the UN women's conference in New York.  It remains to be seen whether the U.S. ambassador to the UN, Nikki Haley, will buckle under the intimidation at this conference, and in the future.

OutRight International and the Global Justice Center targeted Bethany Kozma, a member of the U.S. delegation, who in her private life prior to her appointment to the U.S. Agency for International Development expressed positions on transgenderism which are now identical to the position of the Trump administration.

OutRight has circulated a petition calling for Kozma's removal, saying she referred to the U.S. as “a pro-life nation.” They claim this is inconsistent with U.S. domestic law which allows for abortion on demand. Others have told the Friday Fax that the delegate said instead that the Trump administration is a “pro-life administration” which is true. The administration has taken a pro-life stance in its international relations, as evidenced by the reinstated and expanded Mexico City Policy which bars U.S. funding to foreign pro-abortion advocacy groups.

OutRight's other complaint is the fact that Kozma previously objected to the imposition of a transgender curriculum in her children's school district, and voiced her opinion at a school board meeting. In this, too, her position was consistent with that which the Trump administration has since taken, as evidenced by rescinding Obama-era transgender policies in the public education system.

OutRight has a history of such tactics of intimidation. Last year, Lisa Correnti of C-Fam (publisher of the Friday Fax) came under fire from OutRight when she was appointed to the U.S. delegation to the CSW. Correnti's advocacy for vulnerable women and children was dismissed with Outright launching a smear campaign, including a voluminous dossier condemning positions C-Fam has taken on LGBT issues.

Close observers tell the Friday Fax that the real purpose of the Outright campaign, which includes a petition calling for her ouster from the U.S. delegation, is to cause dissention among the U.S. delegates and intimidate the targeted delegate and her colleagues during negotiations.

At issue in the negotiations, and what has caused Outright's ire, are the issues of “reproductive health”, “sexual orientation and gender identity”, and “comprehensive sexuality education.” The previous Obama administration was a global cheerleader for these issues while the new administration is more circumspect. Outright does not seem to be comfortable with the change in administrations after the 2016 elections.

The Commission on Population and Development begins in two weeks, and observers on both sides are watching closely. The appointment of unapologetic social conservatives to the U.S. delegation would send a strong signal that the administration is serious in its support of human life, is unwilling to be bullied into submission by groups that have never supported its goals or policies, and is willing to defend its hardworking delegates when they are unjustly smeared while doing their job.