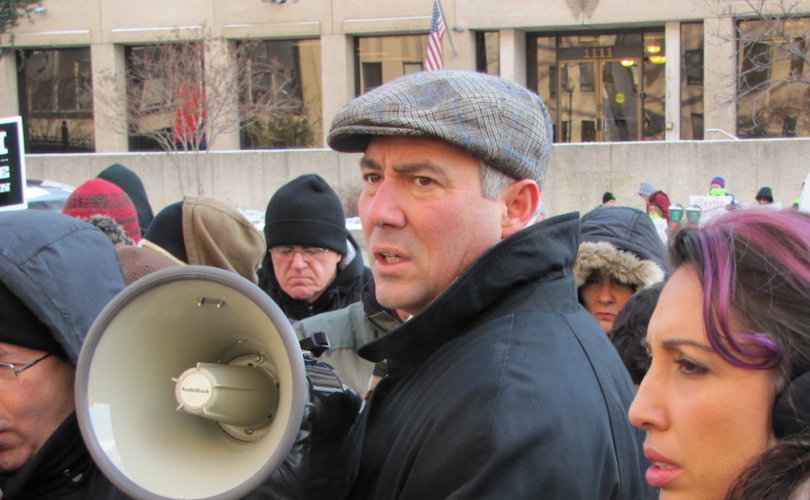 WICHITA, Kansas, April 28, 2016 (LifeSiteNews) – The nation's largest abortion providers, an abortion lobbying group, and an ultra-liberal political organization are demanding that Senator Ted Cruz cut ties with Operation Rescue President Troy Newman – something that only proves how effective he has been, Newman's organization says.

Planned Parenthood, NARAL Pro-Choice America, and People for the American Way are asking Cruz to fire Newman as national co-chair of the “Pro-Lifers for Cruz” coalition, claiming that Newman supports violence.

“Troy Newman’s history of violent rhetoric and harassment toward women’s health providers is truly beyond the pale,” the three say in a letter to Sen. Cruz, linking to quotations from his 2000 book, Their Blood Cries Out.

“What Planned Parenthood and their cohorts call 'violent rhetoric' is really a discussion of Old Testament Bible verses taken out of context,” said Cheryl Sullenger of Operation Rescue and co-author of the book Their Blood Cries Out. The work establishes the sinful guilt of abortion before highlighting the mercy available in the New Testament for those who accept Jesus Christ, Sullenger said.

The letter also cites a report from the National Abortion Federation stating that abortionists have experienced an increase in “hate speech and internet harassment” since the release of CMP's undercover videos of Planned Parenthood, “which Newman was a driving force behind.”

“What they call 'harassment' is peaceful activism that is completely protected by the First Amendment,” Sullenger responded.

Newman has consistently denounced criminal action and violence of any kind during his decades in the pro-life movement, Operation Rescue said of the allegations – many of which were circulated to prevent Newman from entering Australia last year.

“Newman’s position on abortion-related violence is clear. He denounces violence against abortion providers as well as the violence perpetrated by the abortion cartel against innocent babies in the womb and their mothers,” Sullenger said.

“Attacking the messenger is the only way they have to try to discredit the hefty volume of evidence against them. This most recent attack is all about manipulating the public’s perception against those who exposed Planned Parenthood in order to deflect attention from their own crimes.”

But the three groups poured vitriolic scorn on Newman. Michael Keegan, president of People for the American Way, called Newman's role “completely unacceptable…No politician should be allowed to pander to violent anti-choice extremists without being called out.”

“It is not surprising to see Ted Cruz embrace this type of violent extremism — after all this is the same man who has told malicious lies about Planned Parenthood, would criminalize abortion, and tried to shut down the government” to defund Planned Parenthood, said Dawn Laguens, executive vice president of the Planned Parenthood Action Fund. “This is what the Cruz-Fiorina ticket stands for.”

Sullenger dismissed their rhetoric as “a feeble attempt to hurt the presidential candidacy of Sen. Ted Cruz, who they know will seek to enforce the laws against them.”

Cruz has repeatedly stated that, if he is elected president, he will defund Planned Parenthood – before prosecuting them.

Their letter has led to a number of articles in the mainstream media, including Politico, the Huffington Post, and Glamour. The last publication, a feminist magazine aimed at young women, slammed Ted Cruz's choice of Carly Fiorina for vice president, telling its readers to “hold on to your uterus.”

“Not one of these publications bothered to reach out to Newman or Operation Rescue’s staff for their response,” Sullenger said.

This morning and afternoon, both sides of the abortion debate have used the Twitter hashtag #FireTroy to get their message across.

Sen. Cruz has not responded to the call, but the letter implies that purging Newman from the campaign would not satisfy the pro-abortion coalition. “There are a number of coalition members whose records raise serious concerns,” they say.